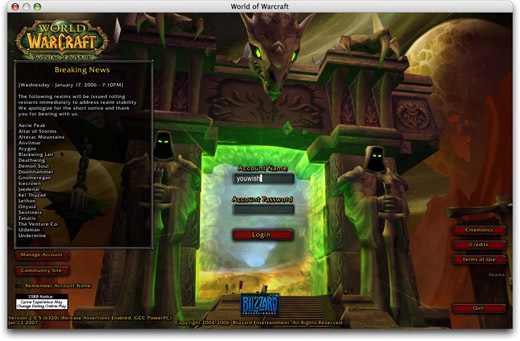 Yesterday I moseyed on into a GameStop to pick up the expansion pack to World of Warcraft, Burning Crusade. When I inquired about Burning Crusade, they said if I didn’t have it reserved, I couldn’t get a copy. Wow, I guess 8 million subscribers is a big deal. Disappointed, but not stupid, I went across the street to Target where they had about 500,000 copies for sale. I shelled out the $40, went home and installed it.

After I upgraded my account and downloaded some patches, I was ready to roll. Thing is, the highest character I have is a 53 Human Rogue. Thus, things like levels 61-70 and The Outland were inaccessible to me at this time. Since that’s pretty much half the expansion right there, I felt like I was already out $20. But then I remembered that Burning Crusade comes with two new races: The Dranei and Blood Elves. 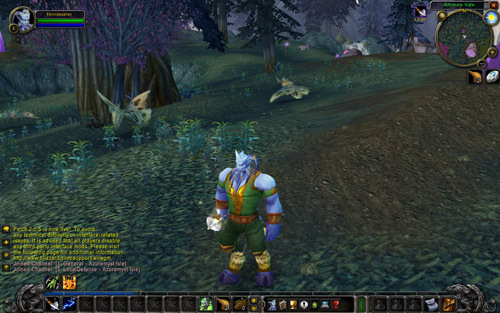 I started a Dranei character on my main Alliance server (Anetheron). I named him Ferrisbueler and after getting to level 3, I remembered why I try not to make new characters in this game. Somewhat bored with the Dranei already, I decided to try out my first ever Horde character: A Blood Elf. My Blood Elf, Sandspider, is a Paladin and looks really awesome. They look like pissed-off Night Elves with a Human flesh color. I really enjoyed the beginner quests they gave me and since the Blood Elf is an entirely new race (along with the Dranei), lots of people were around to mess with. Being a Blood Elf is fun and I can totally see a lot more people using a Blood Elf instead of a Dranei. 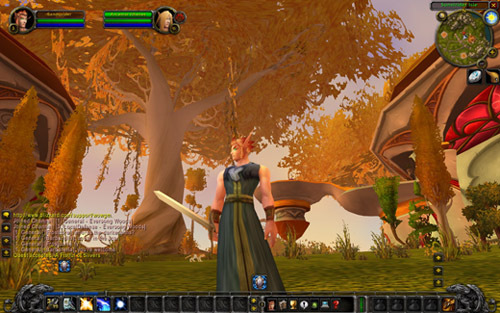 So that’s that. As I dive further into the expansion and try out Jewelcrafting, The Outland, and other new features like flying mounts, I’ll be sure to keep you all updated. If you play WoW and want to join me on my main Alliance server (free character transfers are currently in effect!), just leave your character’s name in the comments and I’ll be sure to whisper you in Azeroth. Hell, if you guys want to roll a new Blood Elf with me, I’m totally down as long as your server is PvP. Let me know what you guys think of WoW:BC!