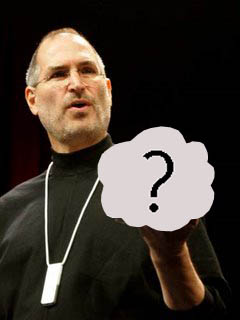 3. What more can Apple do with the iPod?
For all the talk of the true video iPod, I’m beginning to wonder if the product will be disappointing. If Apple brings out something that is like a normal iPod but with a bigger screen, will you be satisfied? I don’t think I will. The iPod’s biggest innovations have been in the form of its physical and software interface. I’m not sure that the touchpanes or touchwheels mooted for the device will be enough. To defend its lead, Apple has to go back to its strengths. For instance, I think the iPod has plenty of room to get lighter and thinner, as the MacBook Pro has done for laptops. It also needs to get friendlier to hold and become central to all home entertainment. Work with TV companies to integrate iPod docks to watch shows easily. Do whatever it takes to build on what people know and and need and innovate from that perspective. It’s easy to fall from the top — just ask Sony.

While I agree with some of the points above (thinner and lighter is good, bigger screen may be unsatisfying), I think the question itself is somewhat misplaced. Apple doesn’t need to innovate more with the iPod – it needs to bring on the next life-changing gadget and let the iPod remain what it is: an extraordinarily simple and effective music player. The iPhone and the still-vague iTV could each very well be it, especially if Apple leverages its relationship with Google (whose CEO recently joined Apple’s board of directors). And that means access to one of the biggest technology phenomena of 2006: YouTube.

Think about it: You can already watch YouTube clips on Verizon V-Cast enabled phones like the LG Chocolate, but that’s still in its infancy; Apple could easily swoop in and capitalize on this by offering tighter cell phone integration with YouTube, if Jobs can sneak around YouTube’s exclusive contract with Verizon for mobile service. And the iTV could have a truly beautiful relationship with YouTube instead of just streaming content from iTunes.

How could the iPod fit into this scheme? A video iPod with a larger screen could well be all that’s needed, but the word on everyone’s lips (thanks to companies like Archos, MusicGremlin, and Microsoft) is wireless. If the next iteration of the iPod winds up with WiFi built in and has a scaled-down version of the Mac OS running on it—just like the one that will reportedly be running on the iPhone—then the sky’s pretty much the limit. Direct wireless digital downloads (and an iTMS subscription service, please oh please) via an embedded version of iTunes would be a pretty rockin’ start. And what if you could get a totally DRM-free To Go-like subscription to YouTube as well? For starters, there’d be a lot more people running into telephone poles while watching the latest clip of someone getting hit in the nads by a 3-year-old on a trike.

Now take all I said in the previous paragraph, crumple it up, and throw it in the garbage, ‘cause it ain’t gonna happen (maybe except for the iTMS subscription service). Jobs is smart. He’s going to save all that WiFi goodness for the iPhone and leave the iPod wireless-less, because no matter how great the iPhone is for playing music, getting mobile content, and uhh… talking?… millions of people will still pay good money for a dedicated audio device that’s simple and doesn’t have too many bells and whistles.

Sure, new features would be great for us tech-savvy folks who can dream up all sorts of possibilities for the iPod, but the fact is that the iPod is a mainstream product first and foremost, and that’s how Apple makes its bread and butter. I’ve been begging Apple for years to incorporate simple niceties like A-B repeat, and they hold fast to the idea that keeping it simple keeps the players flying off the shelves. And I can’t disagree.

I’m not saying the iPod might need some thinning out and a little more screen real estate, but frankly, it ain’t broke for around three quarters of the market, so it doesn’t need fixin’. Future iterations will indeed disappoint if you’re looking for it to be something other than what it is—the simplest and best-designed music player around. In other words, the iPod isn’t going to suddenly start a downward slide into obscurity just because it lacks bells and whistles like WiFi, Bluetooth, and so on, which are in the domain of communications devices. That is… until every cell phone carrier offers iPhones and flash memory gets cheap enough for high-capacity models in the 20GB range at realistic prices. But by then, we’ll all be clamoring for the first subdermal MP3 player.

AudioFile by Mike Kobrin is a weekly reflection on electronic music and the MP3 biz. You can read his collected columns here.