Every mission statement says that a company is good to employees but only actual employees really know the truth. That is the premise behind Jobberwiki, a new job site that lets anyone contribute insight on jobs or companies they have worked for.

Jobberwiki launched just a few days ago and has almost no content but we think it has the potential to be useful. It is a lot like Jobster, except you don’t have to login or give any information about yourself to contribute to a posting.

“I’ve always found that searching for jobs online is pretty easy but I’ve made a few career changes and I’ve always found the challenge was to find inside information about what it’s like to work for a certain company,” said founder Michael Zsigmond in a phone conversation on Thursday. “I am hoping people will start to contribute the inside scoop on what it’s like to work on real jobs for real companies. What’s the culture like in the office? What are the people like? Do they really treat you like they value their employees?”

Zsigmond wrote the wiki while he was in between jobs because it was the kind of resource he would like to have. He has no funding, no employees, no office. He’s not making money off of the site right now, although he’s certainly not opposed to the idea. It isn’t a groundbreaking program. It’s written on MediaWiki, with the addition of the ability to filter listings by company or by job.

The problem with this kind of site is that the people who are motivated to contribute may just be disgruntled employees who are looking to vent.

“I think in the initial stages, that will be true,” Zsigmond said. “But people like to be proud of their job so if someone is ragging on their job, they might log in to post something to the contrary.”

Also, there is no way to know that people who contribute to a posting have ever actually worked for the company. And who is to say that owners of a certain company won’t login as if they were employees and sing their own praises?

Zsigmond said that he might consider letting companies sponsor pages on the site so that they can tell their own story about company culture. While sponsored pages might not be taken as seriously as the user-generated content, they may not be a bad way to add actual job listings to the site.

The validity issues are the same that most wikis face. For now, the biggest hurdle for Jobberwiki is its sheer nakedness. It needs content badly if it is to survive. 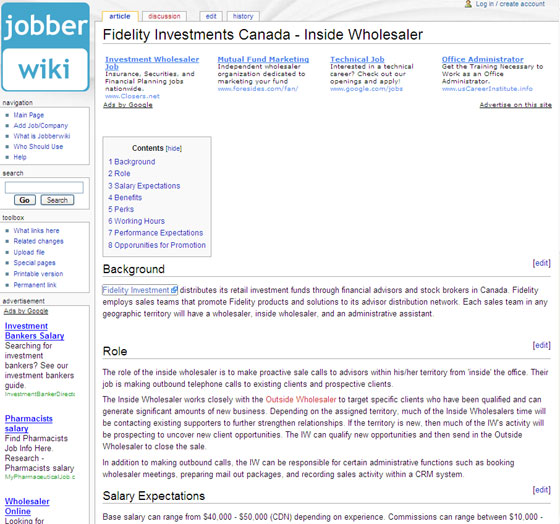