Previously, the company’s server was located in Dallas, Texas but with the new capability to share files and send attachments, Smartsheet needed horsepower from Amazon. S3 gives developers access to storage to run their own global network, which Smartsheet needed for it’s December release. The new version allows users to attach documents from a hard drive or server, and send emails updates about any changes made to a document.

Smartsheet also announced a new pricing structure, which will include a free version of the software without the storage and email capabilities.

“We are shifting away from a corporate team pricing structure to one that broadens the audience,” said Mark Mader, president of Smartsheet, in a phone briefing on Wednesday. “We’re moving into a high-volume type mode and, in a community settings, the last thing you want to do is introduce a barrier to using it.”

Smartsheets is interoperable with Excel but Mader says it is not a duplication of the program. When asked why Smartsheet is any different from Google Spreadsheets or Zoho Sheet, he pointed to three differentiating capabilities: (1) it provides streamlined updates to any document changes; (2) it allows for “relevant alerts,” meaning you can subscribe to only the alerts you want regarding a document at a time interval that you specify; (3) it gives a history of changes on all fields.

Smartsheets also allows users to request changes be made to a document through email. So if I want someone else to change the value of a certain cell, I can email a request so that they can fill out the answer within the email, and changes will be made without that person ever logging into their Smartsheet account. Mader said that the company will look into Outlook integration for their next release.

Smartsheet is a solid offering but can a spreadsheet-only Web app really survive? Zoho is out waving its presentation application as the differentiating factor from Google Docs & Spreadsheets and now it has Office plugins that make it even more universally useful. Plus, it’s free. I’m not sure who will pay for Smartsheets just because it’s a little more convenient but the company says that it has about 2,000 companies using its program since it launched back in August. I’m all for competition in the marketplace but I really think you need a well-rounded Office-type suite of applications if you’re going to be a SaaS documentation program. 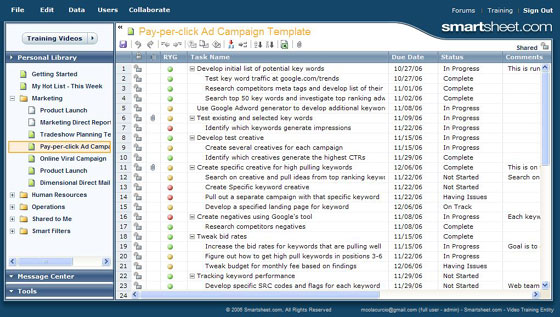