PalTalk, a video chat messenger, is rolling out its new 9.0 client over the next two days with the help of several celebrities, including blogger Ariana Huffington and Amanda Congdon of Rocketboom fame. Paltalk’s messenger client has all the basic IM chat features you expect including interoperability with AIM, Yahoo!, and ICQ, but distinguishes itself by throwing video and chat rooms into the mix.

The new 9.0 client features what they call “SuperIM”, where you can chat with up to nine other people in live video and audio. You view video feeds of your friend’s webcams on a strip running along the top of the window, like the one above. From the strip, you can break out and expand a video feed for a closer look. Such a rich chatting experience may prove hectic for most users used to carrying on multiple conversations, but the ability to switch your focus and audio feed between windows helps control the chaos.

The video quality is great if you shell out the extra $4.99 each month ($59.95/year) for the best version, Paltalk x-treme. The basic version, however, only displays user snapshots, while the second-tier version displays video at about half the frame-rate of x-treme, but for $39.95 per year. There is a good comparison preview here.

Paltalk is known for creating communities out of its four million users (amassed over the past eight years). They have hundreds of chat rooms categorized by topics such as religion, politics, and technology, with subcategories narrowing them down even further. Radio shows like Opie and Anthony use Paltalk to broadcast to a couple thousand fans while they’re on the air, and I expect the same will happen for their guest line-up.

Regular chat rooms on PakTalk can be overstimulating to the unaccustomed user. There are often several IMs at once and music can be blaring from the administrator’s room. You can control some of that by muting audio, ignoring users, sending a personal IM, or raising your hand to talk (similar to Skype Live). If things really get out of hand, users can report abuse through a team of 250 volunteer who police the rooms and respond to complaints.

Amanda Congdon will go live on Paltalk tonight at 8 p.m. Eastern. Everyone who visits the celebrity chat room on Paltalk will get to experience the full video feed for free. See the full schedule here. 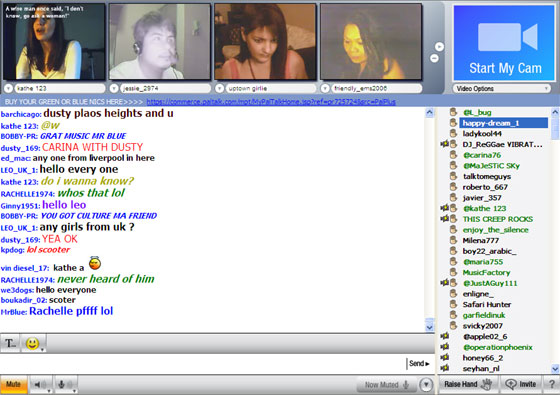