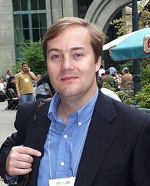 Today at 7 am PST at the SES conference in Chicago, Weblogs Inc. founder Jason Calacanis will announce that he has joined Sequoia Capital as an EIA (Entrepreneur in Action). This comes just two and a half weeks after Jason announced his departure from AOL.

The role will be similar to what’s normally called an “Entrepreneur in Residence” – Jason will take a salary, help review companies pitching for money, and work on his own projects. Entrepreneurs who take this kind of job generally roll out their own new startup within a few months. Look for more news from Calacanis in the near future. Chances are it will be a Sequoia-backed startup.