High profile video startup Brightcove has launched what it calls the Brightcove Network, its video delivery and monetization service for small video publishers. To date Brightcove’s most visible moves have been in providing web video services for major media companies like Warner Music Group, the Wall Street Journal, the New York Times and MTV. The new Brightcove Network, however, appears to pull much of that content into what the company has aimed for since its inception in 2004.

Now that the veil is lifted, it is a little anti-climactic to look at Brightcove after YouTube ramped up, filled out and sold in the time it took this company’s consumer facing service to come to market. None the less, I think it could be a viable play in the long term as media channels proliferate and small publishers look to make their work economically viable.

If a million video channels bloom, Brightcove is positioning itself to be at the center of that new infrastructure. The company has loads of connections to leverage in trying to make that happen. Company founder Jeremy Allaire is the former CTO of Macromedia, the makers of Flash, and the co-founder of Allaire Corporation, the creators of ColdFusion. Brightcove took $5.5 million in Series A funding led by General Catalyst Partners and Accel Partners in March 2005, and $16.2 million from AOL, Hearst Corp and IAC last November. IAC Chairman Barry Diller is on the Brightcove board. This isn’t a startup coming out of any one’s garage, but it is providing video service to a long list of big corporate customers already. Here’s our previous coverage of Brightcove. Now it’s going for the long tail.

By participating in the Brightcove Network, video publishers will be able to manage video posted on their own web sites, showcase their channels for syndication and subscription on the Brightcove website, take 50% of advertising revenue from videos wherever they play and take 70% of revenue from pay-per-download videos, including videos purchased on partner site AOL Video. The Brightcove site is quite changed as of tonight; it looks like an entertainment site instead of a B2B landing page. My first look at it does make me cringe; we’ll see what the quality of the small publisher provided content is.

Full, free, ad supported versions of video files will be available online at Brightcove and DVD quality Windows Media DRM infected files can be purchased for download at the publisher’s discretion. Though the company says it will include videos of all lengths in its directories and community – Brightcove will probably have more 20 to 60 minute videos than other familiar video sites around the web. 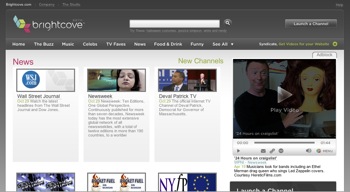 The company plans to rely on the DMCA safe harbor clause in regards to copyrighted video, meaning they will remove video upon a rights holder’s request but will not take pro-active measures to discover illicitly posted content with the kind of technology found at YouTube or Guba.

Ads will appear in several different formats: pre-roll, post roll, overlays and synced banners appearing next to the video player. Free Brightcove Network accounts will have ad placement decided for them, premium Publisher accounts will be able to select their own ad format.

If you believe companies like Brightcove, copyrighted content is not a big part of the YouTube story – it’s about consumer generated video and what we see today is only the beginning. Brightcove is targeting the growing market of semi-professional or serious amateur video producers but small businesses could well find Network participation valuable as well. The company says it sees its primary competitors as Google on the low end and NBBC (our coverage) for high end video producers. I’d add the newly funded Podshow to that list of competitors. Still others could include Blip.tv, VSocial and VideoEgg. I wish I could write great things about Revver, the company that runs post roll still frame ads after user uploaded videos. Brightcove is like a high class version of Revver with more features, a pay-to-download option, a partnership with AOL and a whole lot of money.

Brightcove’s founder Allaire emphasizes the difference between IPTV, which he calls Telcom TV and the open alternative that he calls the Internet of Video. While Telcom TV is a needed upgrade to cable and satellite delivery of traditional video programming, Allaire says, a more exciting model is emerging in the proliferation of countless online video channels produced by small publishers and delivered on a wide variety of platforms. The Brightcove Network appears to be the manifestation of Allair’s vision for the Internet of Video.

Is there a large market of people who would produce quality, monetizable online video if they only had better management tools and infrastructure? I think there are. Some will wrap ads around their content, others will offer videos for a price and still others will license the technology to deliver their message through video in their own branded player. I expect Brightcove to serve all of those user groups relatively well. Whether a community of video producers forms around Brightcove or not will remain to be seen.