Earlier this week Apple announced that a new version of webmail for Mac users is “coming soon.” There was a bit of chatter about this around the blogosphere, with most people concluding that this fresh coat of paint on the inferior .mac product is a bit of a yawn. Even Om Malik, who’s been complaining about .mac for a long time and has reason to cheer, isn’t particularly positive about the announced upgrade and says that he hopes that “this is the first of many changes.”

I agree that .mac is Apple’s most difficult to use product and needs a lot of work. However, I think that the changes are important for one reason: There are very few Ajax webmail services today that allow users to access multiple email accounts. .Mac will be one of them.

I believe webmail is the single most important application to show off the power of Ajax. The reason is that we spend an incredible amount of time on email every day – at least 3-4 hours per day for me. When we spend that much time doing something, even small increases in productivity make a large aggregate positive difference.

Ajax makes a big difference in webmail, as we saw with Oddpost years ago. Oddpost pioneered the use of javascript to help it copy the desktop mail experience, and was one of the early Ajax applications. Users could drag and drop emails into folders, open emails without page refreshes, etc. All of these features were tremendous time savers. It had limitations (it only worked on Windows machines and Internet Explorer), but it was acquired by Yahoo in 2004 and forms the backbone of the new Yahoo mail beta (try it out here).

While other Ajax email applications are around (Gmail has some Ajax features but lacks drag and drop functionality, and Live.com Mail is very nice if often slow), none of them except Yahoo allow users to access other email accounts (it’s worth noting that Goowy has an excellent Flash email service that allows users to access multiple email accounts). If you use Gmail.com, you can only read Gmail emails. Same with Live.com. While you can forward other emails to your gmail or live.com email address, you cannot manage separate email accounts and aliases. That’s a big drawback for people who want an Outlook or Mac Mail experience on the web.

What users want is a rich internet interface for email. What they don’t want is four different interfaces for four different email accounts. What Yahoo and Apple get, and what Google and Microsoft don’t, is that to “own” the user you have to allow them to access competitor’s services as well as your own. Google has the best pure free email service on the Internet. But they don’t have the best interface. Yahoo does. And now Apple is combining the power of Yahoo’s open approach to email with the ability to sync their service to a desktop client. A lot of people are going to be drawn to that.

.Mac webmail will now have both multiple account access and rich Ajax features. Only Yahoo currently offers that. And since .Mac syncs with a desktop client (Yahoo doesn’t of course), it is a completely end-to-end solution. Until now, you had to be using exchange server and Outlook to have anything close to that.

This is an important move by Apple that gives its platform a new advantage over Windows Machines and any of the webmail services out there, including Gmail and Yahoo. I look forward to its launch. 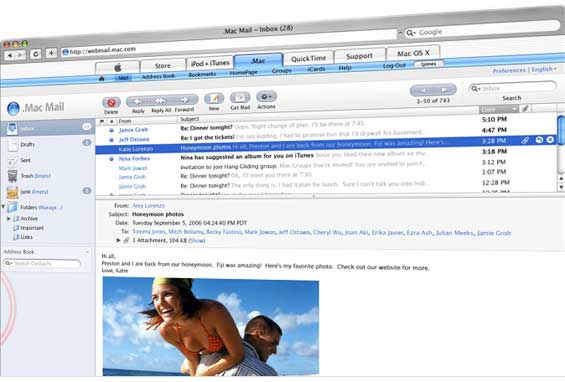