BiggerBoat this week launched their service for site publishers who seek a rich database of music and movie information for search. The company’s approach is to go heavy on metadata for all the search results, which publishers and thus users can then organize in great detail. Contextual ads, recommended links and free content surround those search results. BiggerBoat will move into other categories like video games and television next. The company hopes to make free, rich entertainment search a common feature for topical sites all over the web.

With funding from Zone Ventures and First Round Capital, the company debuted at DEMO in February. It was formerly known as OnMeta and is headed by CEO Adam Liling and CTO Barbara De Lury. Liling’s last company was Pentagon CDs and Tapes, which was acquired by Virgin.

The beta site today lets users view a cross section of a musician’s work organized by guest artists, album style or record label. Movie search can be drilled down into by director, keyword, theme, tone and MPAA rating. Songs, albums and movies can be purchased through affiliate links on the site and sample songs can be heard through Real Player (why not Flash?). Obviously such information is discoverable through sites that already exist online, but as a service provider allowing all this data and functionality to be folded into any other site BiggerBoat could be interesting.

BiggerBoat follows a model similar to Pixsy image search. Just as David Berlind wrote this morning that SMBs should outsource all IT infrastructure, companies like BiggerBoat and Pixsy want to see businesses outsource multimedia search. Outsourcing IT lets companies attain a high level of performance on things they don’t specialize in so they can focus on their particular value propositions – and so too could outsourcing things like multimedia search let many sites offer it as just one powerful feature while focusing on the next level of differentiation.

Big sites like AllMusic.com and AllMovies.com, who are already using BiggerBoat, will see users kept on site for several consecutive searches and clicks around results. Smaller sites will see users taken off site sooner and sent to the BiggerBoat site. Affiliate links to make purchases, when clicked on in a publisher’s site, are split “equitably” between that publisher and BiggerBoat. CEO Adam Liling told me that BiggerBoat was best understood as a service provider similar to AdSense more than it is like licensing the IMDb database.

Liling told me the company’s database is built from licensed databases, web crawls and user uploaded data from more than twenty retailers to date.

Imagining this same level of detail and functionality for the TV and video game markets is interesting. The challenge then would be for licensees to create a compelling experience for their users in a world where easy access to every bit of topical information well parsed is just a commodity that many sites can offer. 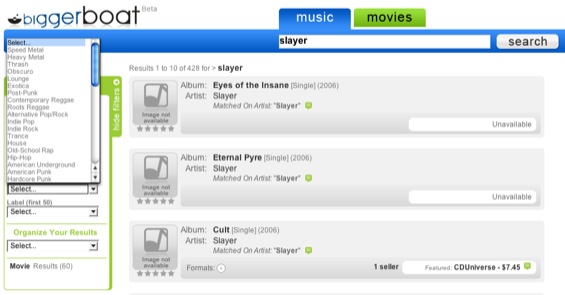