Sportingo is a sports news and analysis site that mixes fan written original content and blog content from off site with licensed sports statistics, schedules and professional photography. It’s modeled after and developed with assistance from the successful South Korean site OhMyNews (English version) and Israel’s Scoop.

Initially focused on European football and tennis, Sportingo offers users a comprehensive content management system to upload their original writing that then gets edited by a team of Sportingo editors. The company’s editors write headlines, fix grammar, approve tags for consistency, apply search engine optimizing metadata to each article, attach relevant statistics and photos licensed from outside vendors and determine placement of the stories on the Sportingo site. Editors can use easy forms to add, remove and place elements from templates in each story. Reader interaction with each story will also impact the placement of stories. Betting odds on matches and sports news are displayed because people find them interesting, no betting goes on via Sportingo. The revenue model is entirely based on advertisements.

The nine person company was founded by Tal Barnoach and Ze’ev Rozov, who previously lead a sports multimedia encyclopedic DVD company that went public in London in 1996.

Sportingo is very similar to what South Korea’s OhMyNews has done with world news. That site has been so successful that after the site’s coverage was recognized as some of the most important media activity around the last Korean presidential election, the newly elected president did his first post-election interview with OhMyNews. The Sportingo team worked with OhMyNews and Israel’s Scoop in developing the editorial process for their sports site. Sportingo asks for more personal information at registration than many people are accustomed to, but that’s an effort to tie journalism to real peoples’ identies. OhMyNews goes even further, requiring that contributors scan and send in personal ID.

In addition to original writing, Sportingo pulls in selected blog posts from off-site, highlighted forum discussions submitted by managers of top sports forums and breaking sports news from Reuters. The company plans to license streaming broadcasts of live sports events, to launch localized versions of the site in Spanish and other languages and hopes to develop teams of user contributers focused on covering breaking news so professional content can be de-emphasized.

User contributors develop reputation through reader ratings of their stories, with status levels starting at Rookie and moving up to being in the Sportingo Hall of Fame. High status contributors will gain privileges like private meetings with athletes and editorial control over their own sections of the site. Unlike many similar sites, there’s no revenue sharing plan for contributors. Speaking of similar sites, several people in comments have recommended checking out Fannation as well.

I think this is awesome. From sports to personal finance and investing, there are a number of startups right now trying to bring structure to topical and prolific segments of the blogosphere, but Sportingo’s investment in editorial control and outside resources that require professional development could really offer users a chance to participate in a very compelling sports journalism community. We all know about the many shortcomings of mainstream media, but the pitfalls of pure user generated content are becoming more evident as well. This kind of hybrid is quite intriguing. 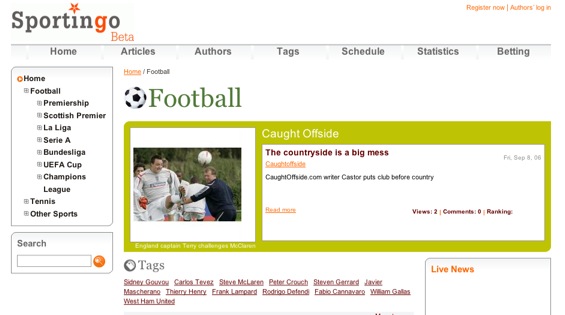