New York based RadiusIM is a just launched web based Ajax chat service. Like Meebo, RadiusIM allows users to log in with Yahoo, AIM, Microsoft or GTalk credentials. They also have their own direct IM service, which auto-determines your location and places an icon on a Google map embedded in the site.

Comparisons will invevitably be made with Palo Alto based Meetro, a very similar instant messaging application that we’ve written about in the past. There are two main differences between Meetro and RadiusIM. First, Meetro is a downloaded application, whereas RadiusIM is entirely web based. Second, RadiusIM has a cool way of just dragging the Google map around the world and seeing which members are located there, whether they are logged in or not. Meetro only shows users within a stated radius around your current location.

RadiusIM isn’t stable and is very slow, but given that it is only a day or two old that isn’t unusual.

Meetro has not seen the hockey stick growth phase yet. And based on what I’ve seen from RadiusIM, the subtle feature differences won’t be enough to make it stand out. What this really comes down to, is, do people really want to see and possibly chat with random strangers just because they are geographically close? We’ll see. 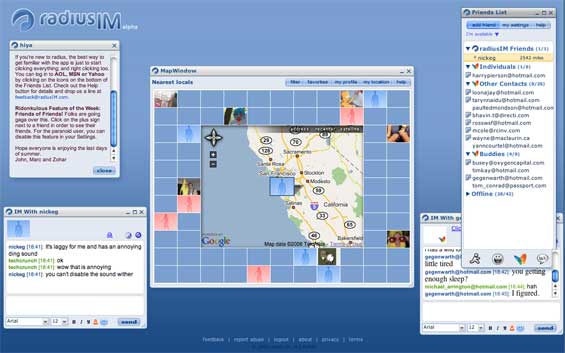