Zlango is a new Israeli startup (there is a lot of innovation going on there) that has created a very interesting new language and associated application that could change the SMS landscape (as well as, eventually, email and IM). Israel design firm Mantis is involved with the project.

The language is based on icons, or pictures. Each icon has a specific meaning – a person pointing to himself for “me” or a heart for “love”. There are over 200 icons included in the Zlango language today.

Users of the service download a thin 64K Java or Brew application for their GSM or CDMA phone. The application converts the icons into a SMS message and then re-translates back to icons at the receiver phone. To see how it works visually, check out the flash tour here and then try out the simulator here.

At first glance this is nothing more than a nifty piece of mobile software and a way to send icon based messages over inexpensive and ubiquitous SMS networks.

But I think the cultural implications of Zlango may be much deeper.

First, two users can communicate using Zlango even if they do not speak the same language. The cross-cultural implications are obvious.

Second, Zlango is not a static language. Rarely used icons will disappear over time, and new icons will be added to the language. One thing that isn’t clearly addressed on the site, though, is whether users will be able to evolve the language directly as happens with spoken language. Allowing users to create, use and share their own icons, some of which will eventually make it into mainstream usage, will be critical for Zlango’s success in my opinion.

Zlango claims that user testing shows that “the majority of youth who tried it, felt comfortable to say that they commanded the language in less than one hour.” After testing the simulator for just a few minutes, I believe that to be true. Complex messages can be created in just a few keystrokes, much faster than normal SMS.

I don’t know if this will catch on with users or not – we’ll have to wait for the upcoming launch to see. Downloading the software is certainly a barrier to adoption and I suspect Zlango will focus on doing deals with carriers to build this directly into phones. They’ll need mass adoption quickly to ensure that copycat services don’t destroy the potential network effect before it has time to establish itself. But all that being said, it’s intruiging to see the birth of a new icon-based language and watching this spread virally, or not, will be interesting. Watch for updates on the Zlango blog. 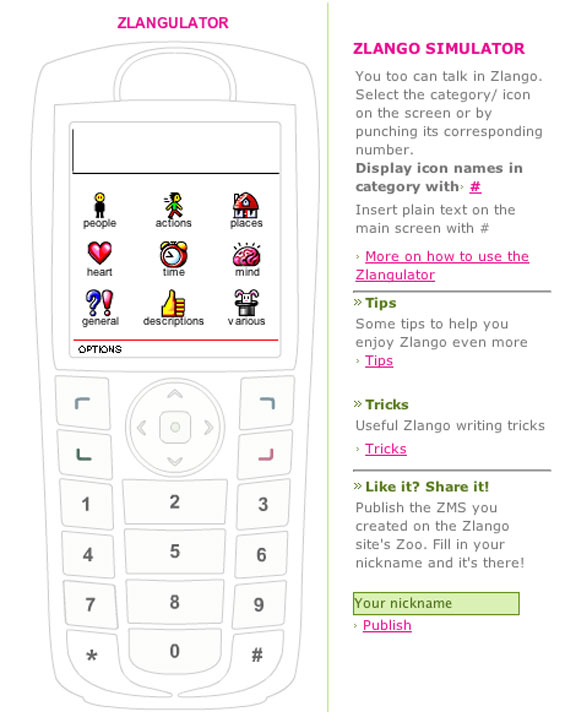