Marc Canter’s much anticipated PeopleAggregator is starting to roll out, password protection is scheduled to be removed Wednesday around noon Pacific time. PeopleAggregator is the product of 3 years of self funded work by Canter to bridge the gap between all the online social networking services available and move the industry towards a standards-based place of collaboration. I took a look inside the system today and talked to Canter on the phone. I wasn’t convinced that this was important before today – but now I am.

Canter was the founder of a company called MacroMind in the 1980’s. MacroMind became Macromedia and Canter says he’s paying penance today for the role he played in locking users into Macromedia Flash. PeopleAggregator is all about using open standards to prevent lock-in in one of the most important sectors of the new web – online social networking.

Here’s how it works. PeopleAggregator.net will be a fully functioning online social network in and of itself, but it will share information with other services through common identity standards for our profiles and through APIs (application programming interfaces) for our writing, multimedia and contacts.

Perhaps most important, PeopleAggregator will also provide new social networks with hosted software and later next month will offer downloads of the software for organizations who prefer to host it themselves. Licenses will be free for nonprofits and will cost commercial ventures a one-time sum after they successfully monetize the system.

What this means is that it will be easy to come and go from new social networks, instead of being locked in to one just because you’ve put the time and energy into using your account there. Instead of being at the mercy of one centralized database and service, if Canter’s vision succeeds then countless social networks will proliferate with unique styles and function but with interoperability.

You can currently log in to PeopleAggregator with a LiveJournal or Flickr ID and cross post automatically to LiveJournal, Xanga and any other system that uses the Blogger, Atom or Metaweblogs APIs. Microsoft recently announced the renaming of its new open identity standard, CardSpace, and that will be one of many identity standards supported by PeopleAggregator. Canter expects AOL, Yahoo and Beebo to get on board soon – MySpace will be the hard one, he says.

Canter says he’s got big plans for RSS parsing by item type, with access control for friends, etc. The site already has a nice UI for structured blogging, something I never thought I’d be interested in. The use of a graphic interface, linked to forms that tag new content as a blog post, an event listing, a product review, etc. is so easy in PeopleAggregator that I can imagine myself and others using it happily.

I enjoyed testing PeopleAggregator out, and it solid enough with a few bugs, but what’s most exciting is that any problems I have with its interface, culture or rules are no big deal – I can just take my identity, blog posts and pictures over to another social network that supports open standards and that I like better. That’s power for users.

I talk to people creating new social networks regularly. I always ask them if they are supporting open identity standards. None of the other startups I talk to are. Here’s a way to do that and thus win loyal users through trust instead of lock-in. 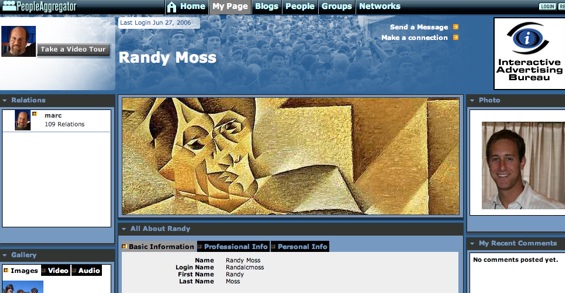