Markaboo is a fantastic new social bookmarking tool developed by Christian Romney and Jean Thomas from a company called tglo. It’s open source and has a great feature set.

The bookmarklet to save to Markaboo includes all the basic fields for URL, title, tags and description. There is a nice option to view all your tags and click those you want to apply.

Users can also enter notes pages and upload files as separate items in their archives; Markaboo is for saving far more than just URLs. One of the best features is that photos and notes can be saved, titled and tagged by mobile phone and email.

Bookmarks and favorites can be imported in a number of different formats. There are simple, unobtrusive google ads on the item pages. The Markaboo user community is made up of programmers right now, but the system is so easy use that the shared bookmarks will likely diversify quickly.

Though bookmarks can be designated as private, by default you can see or subscribe to any one’s bookmarks. So far the site doesn’t have support for a “popular” items page by tag, but as use expands I can imagine that being included.

This is just a solid, attractive, easy to use social bookmarking service. It’s easy to love. The current version was released last Wednesday and the developers say that the community will get to shape the feature set for the 1.0 release. If there is an export option there now, I don’t see it. I assume the developer community will make that happen.

If Markaboo didn’t work well or had limited options, I’d still be interested in it because the code is shared with interested developers through an attribution, noncommercial, share alike Creative Commons licence. Fortunately, the system itself is awesome.

A couple of notes: the site’s having Safari problems with account creation, though Firefox is working well and I haven’t tested it on IE. See comments below for discussion of why the noncommercial clause is a bad move and how the company is dealing with it. [Update: the noncommercial clause was removed in less than 24 hours after discussion.] If you like Ruby on Rails apps like this, check out this weekend’s Rails Day 2006. Service originally discovered via eHub, thanks Emily. 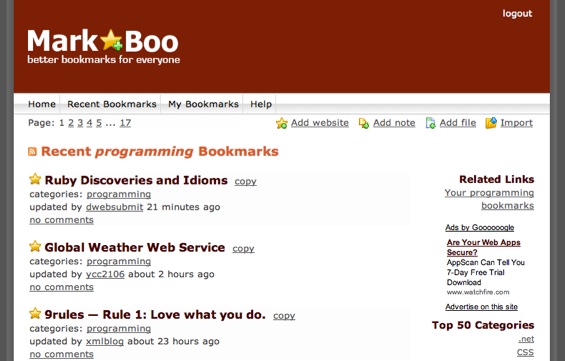