Valleywag got the scoop today that a next version of the hugely popular news site Digg will include many new categories outside of technology. Whether other communities of interest and expertise will follow and fill an expanded digg space seems to be the question.

Here are the Valleywag discovered screenshots side by side with screen captures of the corresponding sections of the current design.

Above, two categories lists, the new one on the right. Categories and login are moved together to the left margin of the screen. Non-tech categories prominently displayed.

More pics and some graphs after the jump.

Above, new design allows stories to be viewed by popular daily, weekly, monthly or recently.

Many people are concerned that the petty banter seen on technology topics will only be worse around political news. Many have tried to create digg-clones on non-tech topics, most with little success.

Two comparisons that might be relevant, if imperfect, are the following:

Traffic at Memeorandum, before and after the tech part was given it’s own domain at techmeme.com and politics were counted separately. 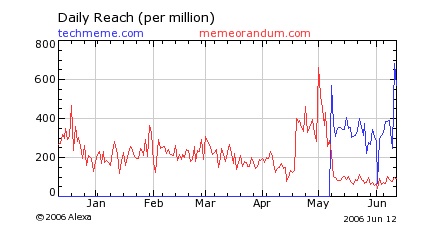 Compare traffic at the global super network of user generated content, Indymedia.org to the geeks of Digg. Here’s how one contest between politics and tech has played out to date. 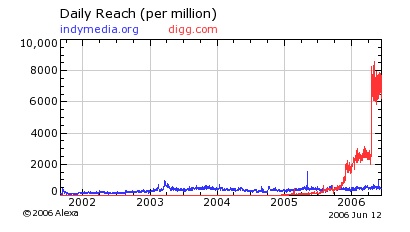 In other words, I question whether the technology of Digg will be taken up by people with other interests, or whether the digg style news technology is only of interest to those interested in technology.

Just for fun, here’s a pic of what Digg looked like in its first iteration – back in the dark ages of January, 2005. 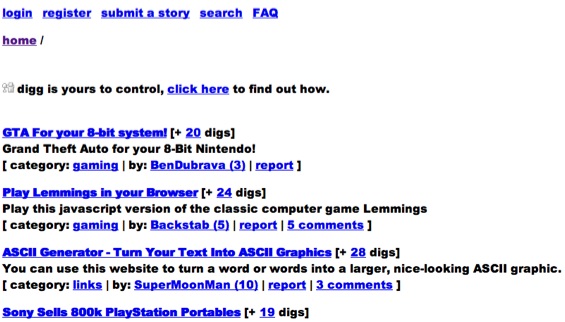