Imagine a perfectly engineered car. The engine is powerful and runs on clean energy. It has responsive handling, comprehensive safety features, and a top-notch sound system.

But, for whatever reason, the driver’s seat design was an afterthought. It is uncomfortable. Unnatural. And after just 15 minutes, most people develop back pain.
Would you buy the car?

Most likely not. The experience of being comfortable on the road is ultimately more important than horsepower or miles per gallon.

It’s the same with all technology. Users will likely never adopt a tool that they don’t enjoy using, isn’t intuitive, or leaves them feeling worse than when they started using it. We humans are emotional creatures who make decisions based on likability, convenience and trust, not just technical heft.

“When the task at hand causes stress or other negative feelings — which anything to do with money elicits for many people — products need to proactively help people engage,” says Leslie Witt, vice president of design at Intuit. “We have to equip users with enough information and intelligent guidance to keep them moving forward with confidence.”

To better capture the role and importance of human-centric UIs in crafting effective solutions, we’ve partnered with Intuit to explore the current and future states of “smart” UIs: user interfaces that employ humanized technology and artificial intelligence to cover every aspect of a user’s needs.

A “smart” UI is essentially a humanized UI, a user interface that combines the facets of artificial intelligence with intuitive design to go beyond processing speed and data accuracy. Users today expect more than accurate, relevant, and timely responses. They want an experience that takes burdensome or emotionally draining tasks and makes them easier.

Let’s look at the issue of financial management, for example. According to a 2015 study by the American Psychological Association, money is the most common source of stress, with 64 percent of Americans reporting it as a somewhat or very significant stressor. To create an effective financial management product, technologists can consider the emotional barriers as much as the technical barriers when designing a conversational user experience. A tone-deaf alert when someone is over budget is much less useful than an encouraging reminder paired with actionable advice.

“Money is essential to almost every human desire and interaction, yet it’s also deeply anxiety-ridden and even feared,” says Witt. “The challenge is to really speak to the person and adapt to how they’re feeling.”

Is emotion really that important in AI? Can’t technology just do what it does best?

Efforts today to satisfy users’ emotional needs as much as logistical needs are related to a broader movement of human-centric technology. As AI (and its powerful subsets, such as machine learning) gains widespread acceptance, leading academics, engineers and institutions want to ensure these tools are serving human interests, instead of the other way around. 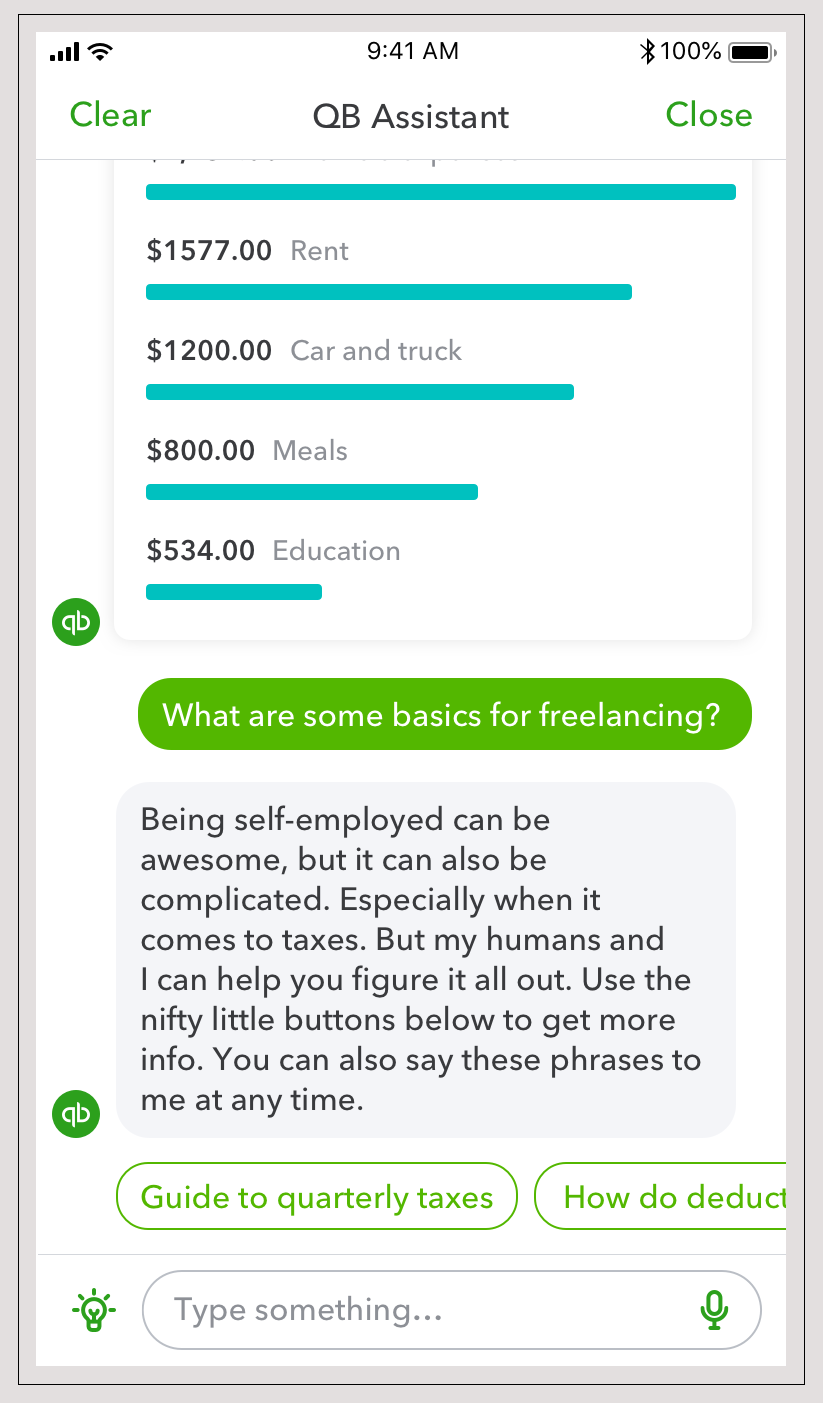 An example of Intuit’s QuickBooks Assistant, a UI that offers a conversational chat experience to help solve common problems for small business owners and the self-employed.

Given today’s emerging technologies and our increased understanding of human psychology, UIs are capable of much more than they have been before. To stay relevant, engineers and companies need to be able to bridge the divide between technology and human emotion.

How can a simple UI instill confidence in a user, or make them feel differently about something?

One of the most important ways technology can inspire confidence is through trust. A number of academic studies have shown that user trust is correlated with user adoption, and Intuit cites a lack of confidence as the leading cause of customer defection from tax-preparation software.

To form trust, users want to understand why a product came up with the solution, and they want to understand — at least at a basic level — how the algorithm reached that conclusion. Especially when it comes to powerful new technologies like AI, transparency is key.

“One core dimension of trust is transparency, and transparency links heavily to explainability,” says Witt.

The emergent field of Explainable AI, also known as Transparent AI or Interpretable AI, is all about trust. A tool that can go back through its own process to show how certain decisions or computations were made is much more useful to everyone — from regulators to individuals — than a “black box” of mysteries that can stoke fears about unknown code errors or biased assumptions.

Intuit’s ExplainWhy feature — an example of “explainable AI” at work.

Intuit’s ExplainWhy feature is an example of explaining the rationale behind a decision. If users were denied a certain tax credit, for instance, they can dig as deep as they want to understand why they received the answer they did.

Ok, I get trust and transparency, but how else can a ‘smart’ UI improve success?

Some of the first efforts toward likability took the form of chat bots, which use a conversational UI to answer common questions. Since the most common way humans share ideas and seek information is through conversations with others, successful conversational UI more closely resembles real-world scenarios.

“We’re always trying to make things feel more natural,” says Phouphet Sihavong, director of design in Intuit’s Technology Futures Group. “We listen to the user, interpret their questions and actions, and then match our responses to what they really mean.”

“The system should always be contextually aware of where the user is at and serve them a user flow that’s curated for them,” says Sihavong.

So where do we go from here?

The key to a truly frictionless interaction between user and interface is the Voice User Interface (VUI), a UI that responds to voice commands that can be used to control most smart home assistants, mobile devices, and even amenities in our cars.

Once programs can accurately interpret all user commands by voice, we could see computers become less tactile (as keyboards and mice become less critical), and mobility will only increase.

“It’s not all about screens,” says Sihavong. “We want the technology to be invisible. We want it to blend into everyday life.”

FROM INTUIT:
The engineers at Intuit firmly believe that we can solve the world’s most challenging problems using thoughtfully applied technology — even the issues that many Americans face today, which are brought about by student debt, the rising cost of living and other factors that contribute to financial insecurity. That’s why Intuit is bringing you “Prosperity: Empowered,” a series that highlights how emotional engineering and tech come together to build the products that help individuals break cycles of debt and achieve financial prosperity on their own terms. To learn more about how the top tech talent at Intuit uses technology like image recognition, CUI and assisted experiences to power prosperity throughout the world, visit intuitcareers.com.