The holiday quarter is a make-or-break period for many companies—especially those that are trying to get a physical product into your hands.

Ecommerce companies, in particular, have to take advantage of the massive spending that happens during the holidays. They’ll invest in advertising to catch the Black Friday wave or pushing out a steady campaign headed toward Christmas. But that holiday sales cycle is critical for companies trying to close out the year on a strong note.

The timing for spending on these platforms not only offers a lot of insight on how ecommerce companies look to catch the consumer, but also on the usage of each platform overall.

Which platform did ecommerce companies use the most?

An ecommerce business typically has to get a product into the hands of a consumer when all is said and done. And while there are a variety of products that help these companies get in front of users at different points of their decision-making, Facebook is still the clear leader when it comes to ad spending by Brex Ecommerce companies. We found that Facebook spending made up nearly two-thirds of all advertising spending by Brex ecommerce customers in the fourth quarter this year. 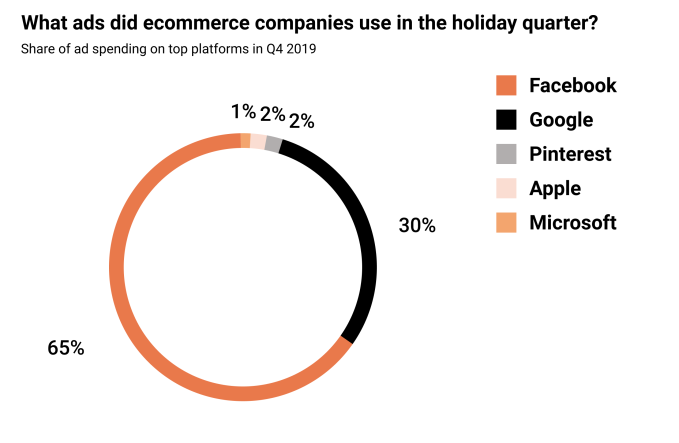 Facebook lends itself to a highly visual experience. After all, users are scrolling through their feed and are going to zero in on eye-popping photos—and products that lend themselves toward a more visual advertising experience. Facebook is also pretty ubiquitous. Facebook has 189 million people checking the app every day in the U.S. and Canada. Users would spend more than a half-hour every day on Facebook in 2019, as well, according to an eMarketer estimate.

In short, it’s a lot of eyeballs that spend a lot of time looking at their Facebook feed, or at least they’re looking somewhere on Facebook. That focus on a visual experience is also more or less the thesis of Pinterest, which still only took up a small percentage of ad spending. Interestingly, we also saw Apple search ads and Microsoft advertising (in its Bing search engine) show up among the top platforms.

Facebook, like other platforms, can also give its advertisers insights into how these kinds of ads are performing. And increasingly ecommerce companies are getting access to tools that help better figure out who their customers are (and what they want) at a more granular level. That goes beyond Facebook and these platforms as well, with companies like Klaviyo (a Brex partner) diving into many touchpoints for these businesses and helping them improve their performance.

Timing matters when it comes to choosing an ad platform

Getting in front of a potential customer isn’t the only challenge ecommerce businesses face when it comes to advertising. They also have to get in front of those customers at the right time. We know these platforms help companies find their customers at different points of their decision-making, but we can also see this in how Brex Ecommerce companies use advertising tools.

We found that spending on Facebook tends to peak during the week of Black Friday, whereas spending on Google spending peaks right before Christmas. Pinterest, though smaller, also offers an exciting insight as to when spending peaks: the beginning of December. And each does, in a way, line up with the areas that each platform excels. 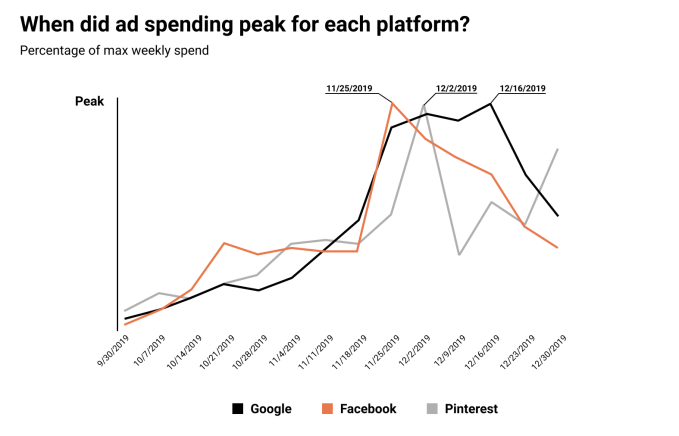 When a user is casually thinking about what they might buy, but aren’t necessarily ready to make a purchase, Facebook may be the best place to advertise to them. At that moment, ecommerce businesses are mostly trying to plant the idea of a product and show its benefits. They’ll also probably be competing with a wide variety of other products, so they need to demonstrate the value proposition to a potential customer early.

Google, meanwhile, helps companies get in front of a user that’s deciding what he or she wants to buy. A consumer has said, “I want this kind of thing, and I intend to buy it,” when they’re making a Google search. That’s a critical moment for ecommerce businesses as they need to remind them that their product is the one that would be best for that potential user.

We can see Facebook spending spikes at the top of the holiday starting season and very slowly declines heading toward Christmas. Consumers have already learned as much as an ecommerce business can hope by the time Christmas comes around. We then see that Google spending rises rapidly around Black Friday, and then peaks right at the week before Christmas—around the time someone is probably making a purchase.

It’s sometimes hard to guess the timing correctly, depending on the product. And companies early on might find it easier to go with an agency that has experience handling these kinds of campaigns. You can find agencies that can help your business through Brex’s agency portal.

How much are ecommerce businesses spending on advertising?

Advertising amid heavy competition isn’t cheap. And ecommerce businesses have to start the advertising process early on (net-60 day terms help a lot here). We found that on average Brex Ecommerce customers spent more than $100,000 on Google ads and more than $200,000 on Facebook ads in the fourth quarter—and some companies have to go well beyond.

To get a better sense of just how expensive every week is, we took a look at the average weekly spend on Facebook—which accounted for the majority of Brex Ecommerce customer spend. We again found that spending peaked during the week of Black Friday, but also that ecommerce businesses, on average, spent more than $50,000 on their Facebook campaigns that week alone. 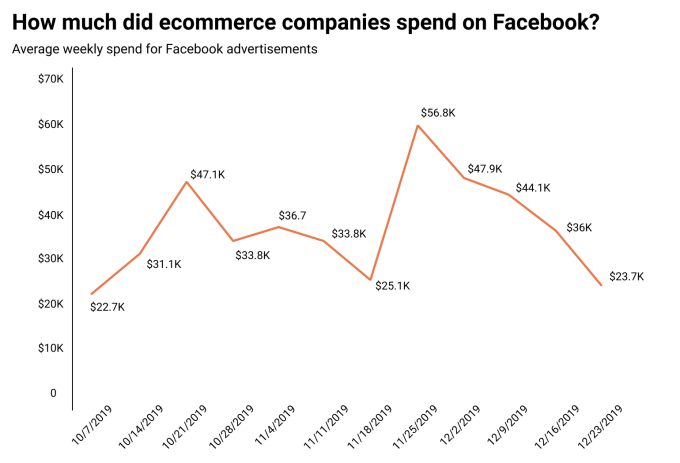 Facebook, like any ad platform, prices its ads based on how competitive the real estate is. If many companies are selling shoes online, it’ll be expensive to advertise a pair of shoes. It helps if your ads are engaging and exciting and spread on their own, but it’ll still be costly to get the campaign up and running. We can see that the spending is pretty consistent, but that week is essential not only to try to catch the Black Friday wave but plant the idea heading into the holidays.

What works best for ecommerce businesses when advertising?

It’s essential to understand the dynamics behind advertising and the best practices. Businesses that are just getting started might consider working with a marketing agency to learn the ropes, though even larger companies could find much value working with these agencies to refine their strategy. You can find a list of agencies in Brex’s marketing agency portal.

Now that the 2019 holiday quarter has wrapped up, ecommerce businesses are likely already looking at the holiday quarter for 2020 to once again deliver reliable results.

While all of this offers a good look at how ecommerce businesses advertise during the holidays, it’s important to remember that there isn’t one right answer. Some products may perform well on Facebook, while others perform best on Google. If a company isn’t spending at least $50,000 on Facebook around Black Friday, it doesn’t mean they aren’t spending correctly.

(Hey, their product may have even gone viral on its own. You never know when it comes to the Internet.)

Uncover even more learnings about how startups are spending their capital on the Brex Startup Data Hub.