One of the most important initiatives of the Indiana Economic Development Corporation (IEDC) is to help startups from their region grow and build a robust culture around innovation and entrepreneurship. Impressed with the TechCrunch brand, IEDC was determined to make it to Disrupt to support its startups in the best way possible. They ultimately combined forces with gener8tor, a top accelerator program in the Midwest known for mentoring and turning startups into something valuable. Together, they created the “Indiana powered by gener8tor Pavillion” consisting of 8 rockstar Hoosier startups. 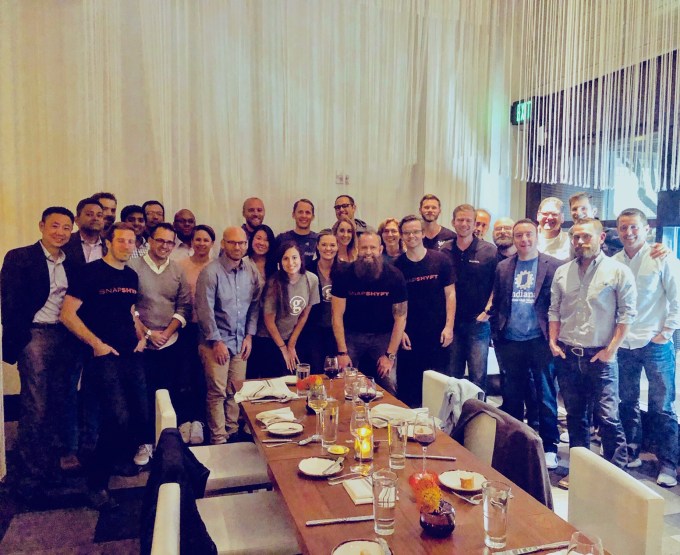 Indiana’s pavilion banner signed by all of the exhibiting startups

In addition to organizing a pavilion, gener8tor and IEDC maximized their time in San Francisco, by hosting a 40-person dinner the night before Disrupt kicked off. At first, it was just intended for those that were traveling with them to Disrupt, but ultimately they opened it up to their network of people in SF who had ties to Indiana, and those that wanted to know more. They had conversations around Indiana’s tech scene, the state’s willingness to put the pavilion together, and the partnership with gener8tor.

Last, Aaron said that having a designated area for their delegation was key for them. “Having a banner next to countries around the world was extremely impactful. People asked us all kinds of questions about Indiana.” For example, a grocery company at Disrupt that had already been independently working with a supplier in Indiana noticed the Indiana Pavilion in Startup Alley. Their interaction at Disrupt gave them a reason to physically travel to Indianapolis to both meet with this potential partner and explore Indiana’s real estate options and ecosystem.

“The reach that TechCrunch is able to pull from and your base of readership and following is incredible. It’s important to have Indiana featured in the same sentence at TechCrunch Disrupt. You guys feature incredible programming throughout the event, and the caliber of talent you get is the best. Being amongst your name and brand recognition is important to Indiana.” — Aaron Vigil-Martinez, Vice President, Small Business & Entrepreneurship, IEDC

If you’re looking to grow awareness of your state or region’s startup innovations with Disrupt attendees, it’s a no-brainer to bring a delegation to Disrupt San Francisco this October 2-4. You never know who you’ll meet or what connections you’ll make. Simply fill out this form and someone will get back to you shortly or you can email startupalley@techcrunch.com directly with any other questions.