A new venture from space infrastructure company Momentus founder and former CEO Mikhail Kokorich aims to build a hypersonic aircraft for autonomous cargo delivery around the world. While the craft is far from completion, let alone testing and certification, a $29 million seed round should help things along.

The stated plan is to build a hypersonic vehicle (i.e. multiples of the speed of sound) powered by liquid hydrogen and with only water as exhaust, which would enable point to point delivery nearly anywhere on the planet. Ambitious, yes. Expensive, yes. Difficult to engineer, also yes.

The new company, Destinus, is Kokorich’s first big move since he exited Momentus shortly before the latter’s SPAC. He left under something of a cloud, as there were allegations of the company having misled investors and soft-pedaled security issues relating to his ownership (Kokorich being Russian).

These troubles (and subsequent $7 million settlement with the SEC) do not seem to have affected the confidence of Destinus’s investors, including Conny & Co, Quiet Capital, One Way Ventures, Liquid2 Ventures, Cathexis Ventures and ACE & Company. The 26.8 million Swiss franc (about $29 million) round suggests they see a market and a way to capture it.

A spaceplane is a winged aircraft designed to take off from the ground and travel outside the atmosphere and re-enter, all under its own power and navigation. The most famous is probably the U.S. government’s mysterious (as it is invariably described) X-37B, which is purportedly used for space-based testing for three-letter agencies.

The Jungfrau, as the prototype craft being designed by Destinus is called, would be an entirely autonomous “hyperplane,” as it doesn’t quite go to space, staying well below the Karman line but for aerodynamic purposes quite close to vacuum. They are aiming for speeds as high as mach 15 at 60 kilometers up — the actual groundspeed will depend on a lot of factors and isn’t so simply stated. Then the plane will re-enter and glide to its destination. 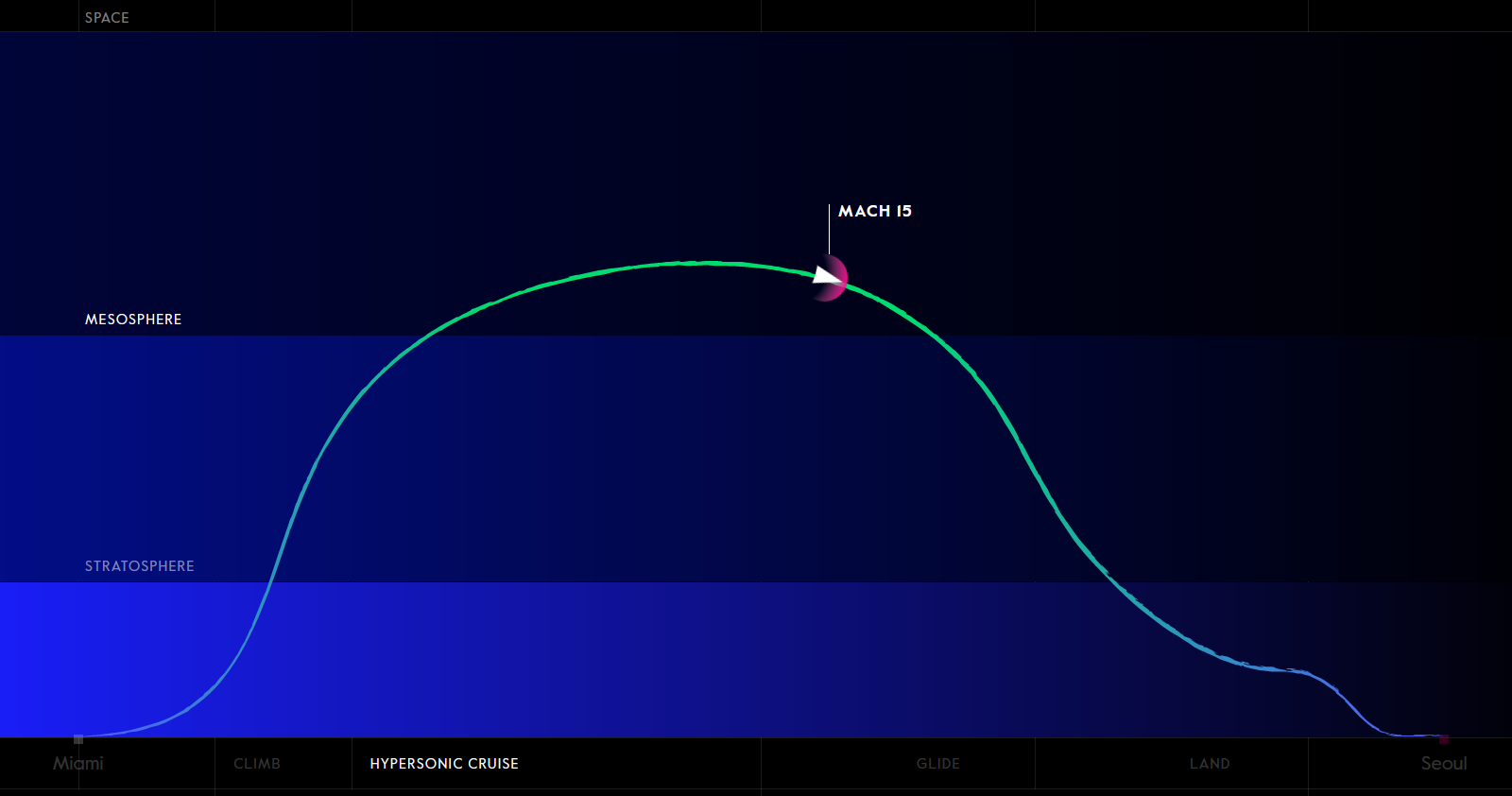 Illustration of a hypothetical (and not to scale) flight path from Miami to Seoul. Image Credits: Destinus

This is all untested, not to say hypothetical. Kokorich told TechCrunch that the company flew its small-scale prototype, about the length of a car, last year, and that it expects to fly the larger Jungfrau later in 2022. They’re currently nailing down the guidance, navigation and control systems that will allow the craft to operate autonomously.

“This year, we plan to start ground and flight tests of ATR [air turbo rocket] engines with hydrogen as fuel, which we are developing ourselves,” he said. “Like a turbojet, the ATR engine is an airbreathing jet engine. Due to its parameters, it is a suitable engine for both the subsonic and supersonic flight phases of our hyperplane. Later next year, we plan to fly the next iteration of the prototype with both ATR and a second hydrogen rocket engine — it will be the configuration for our commercial vehicles.”

And what will these commercial vehicles do? They plan to start at a payload capacity of about a ton, with the intention to provide “relief and emergency cargo anywhere on Earth.” Using cheap, clean hydrogen for fuel could let them cut costs and compete at some levels with existing cargo providers. “But first we plan to target a few categories of early adopters,” Kokorich said. “First and foremost, emergency cargo — such as parts for sensitive production cycles, or valuable perishable goods such as isotopes with a short half-life for cancer treatment, or human organs.”

It’s a pleasant thought. But that all presumes that the craft is able not just to fly at the speeds and distances planned, but do so within a complex and international legal framework. Autonomous and supersonic aircraft are subject to numerous restrictions in many countries, and Destinus’s craft would be both.

Kokorich said that the company has permission to fly at subsonic speed already (presumably in Switzerland, where the company is based), and that supersonic tests and the requisite permissions will come with the third prototype (i.e. next year’s). Because it flies so high, the noise from its boom would be a fraction of that created by low-altitude fighters and the like. But there may need to be new regulatory schema altogether, something Destinus hopes to anticipate.

It’s a lot of ifs and big claims, but the fact that there’s a flying prototype (even if it could only transport a couple bags of groceries) puts them ahead of many others attempting to push the envelope, so to speak, in aerospace. We’ll check back with Destinus closer to the planned test flights.