Performance reviews eat up a lot of a manager’s time and are often the most dreaded part of work. OnLoop aims to bring some joy into the process by enabling information-gathering to happen behind the scenes and be easier for hybrid workforces.

The Singapore-based company designed a mobile-first product that consistently gathers employee feedback and goals so that the company has better insights into how both individuals and teams are doing. The feedback is also captured and converted into auto-generated reviews that lay out all of the content collected for managers to then quickly put together a finished product.

How engaged are your employees?

OnLoop co-founder and CEO Projjal Ghatak spent over three years at Uber and said he saw his fair share of productivity tools, but still struggled to develop his own team as tasks and communication were done differently by each employee.

“This is the one problem that companies consistently complain about — not having the right tool to develop teams,” he added.

As someone who began spending more and more time on his phone, Ghatak wanted his product to be mobile-native and eliminate the need for managers to start from scratch on performance reviews each time. Rather than spend days gathering the information, as the name suggests, OnLoop continuously and automatically captures the data and converts it into a well-written summary. 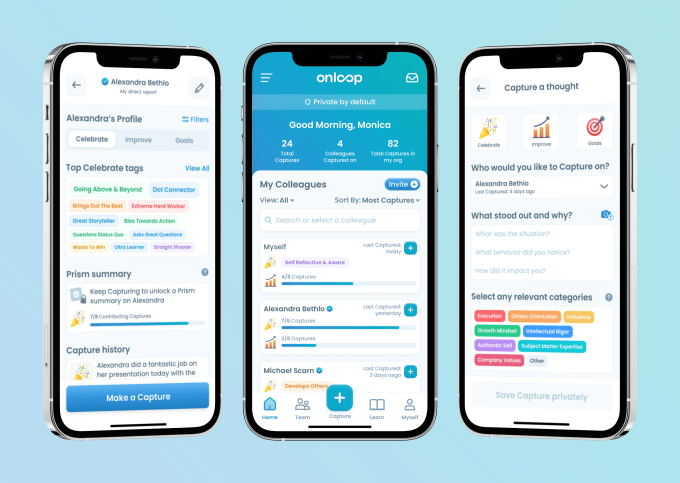 Having that continuous loop of information is good for morale, he said. He points to data that shows regular self-reflection and feedback increased productivity by 20%, and a Gallup study where only 14% of employees thought their performance reviews inspired them to improve.

“A lot of company culture is set by the leaders, so as they want to drive this culture in their organizations, we are the tool that drives this,” Ghatak said. “Our job is to help educate the teams on how to do that well. We hear time and time again to make it fun and convenient. Teams don’t realize that if you are helping colleagues understand, showing them a light they didn’t have before, it will drive impact.”

The new funding will be mainly invested into product development and R&D, including expanding product, data and engineering teams. The company will also look at its sales and marketing framework. The company currently has 22 employees.

OnLoop was able to convert some of its early adopters into paying customers and is now focusing on figuring out a scalable way to get the product into the hands of more teams.

Piruze Sabuncu, partner at Square Peg Capital, experienced the pain of performance reviews when she was working in Stripe’s Southeast Asia and Hong Kong region. One of the challenges she faced working with regional teams was that an employee’s direct manager could be located elsewhere, yet work closely with a manager in their respective office.

Square Peg itself uses OnLoop, and Sabuncu said she liked that it is mobile-first and was designed in a way that people didn’t open it up and dread using it.

“Who your manager is, is a big question, but it shouldn’t matter,” she added. “It would still be my duty to be capturing and developing the person even if they were not my direct person. Everyone is talking about remote and hybrid work, and it is not going anywhere — it is here to stay. We believe this is a huge opportunity, a $400 billion market to disrupt, and OnLoop is providing better ways to communicate and give feedback.”

Editor’s note: Due to error, the round amount and lead investors were updated following the announcement.