A team of mobile app engineers and designers from companies like Rent the Runway, ClassPass, Kickstarter and others, are now launching their own startup, Runway, to address the common pain points they experienced around the mobile app release cycle. With Runway, teams can connect their existing tools to keep track of the progress of an app’s release, automate many of the manual steps along the way and better facilitate communication among all those involved.

“Mobile app releases are exercises in herding cats, we often say. There’s a lot of moving pieces and a lot of fragmentation across tools,” explains Runway co-founder Gabriel Savit, who met his fellow co-founders — Isabel Barrera, David Filion, and Matt Varghese — when they all worked together as the first mobile app team at Rent the Runway.

“The result is a lot of overhead in terms of time spent and wasted, a lot of back and forth on Slack to make sure things are ready to ship,” he says.

Typically, interdisciplinary teams involving engineers, product, marketing, design, QA and more, will keep each other updated on the app’s progress using things like spreadsheets and other shared documents, in addition to Slack.

Meanwhile, the actual work taking place to prepare for the release is being managed with a variety of separate tools, like GitHub, JIRA, Trello, Bitrise, CircleCI and others. 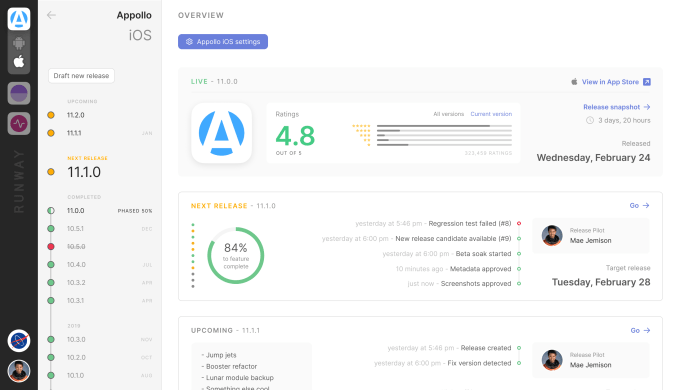 Runway is designed to work as an integration layer across all the team’s tools. Using a simple OAuth authentication flow, the team connects whichever tools they use with Runway, then configure a few settings that allow Runway to understand their unique workflow — like what their branching strategy is, how they create release branches, how they tag releases and so on.

In other words, teams train Runway to understand how they operate — they don’t have to change their own processes or behavior to accommodate Runway.

Once set up, Runway reads the information from the various integration points, interprets it and takes action. Everyone on the team is able to log into Runway via its web interface and see exactly where they are in the release cycle and what still needs to be done.

“We’re forming this glue, this connective tissue between all of the moving pieces and the tools, and creating a true source of truth that everybody can refer to and sync or gather around. That really facilitates and improves the level of collaboration and getting people on the same page,” Savit says. 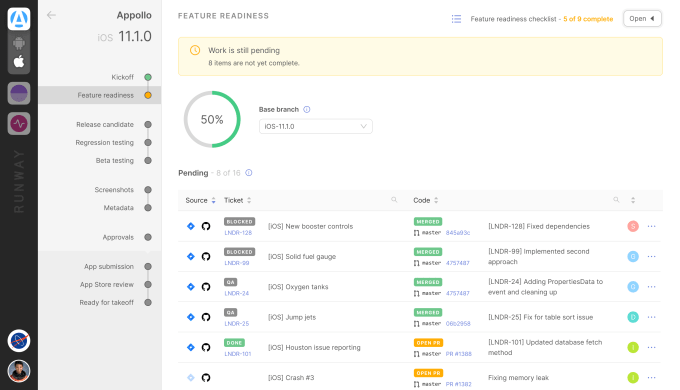 As the work continues, Runway helps to identify problems, like missing JIRA tags, for example. It then automatically backfills those tags. It can also help prevent other mistakes, like when the incorrect build is being selected for submission.

Another automation involves Slack communication. Because Runway understands who’s responsible for what, it can direct Slack notifications and updates to specific members of the team. This reduces the noise in the Slack channel and ensures that everyone knows what they’re meant to be working on.

Currently, Runway is focused on all the parts of the mobile app release cycle from kickoff to submission to the actual app store releases. On its near-term roadmap, it plans to expand its integrations to include connections to things like bug reporting and beta testing platforms. Longer term, the company wants to expand its workflow to include launching apps on other platforms, like desktop. 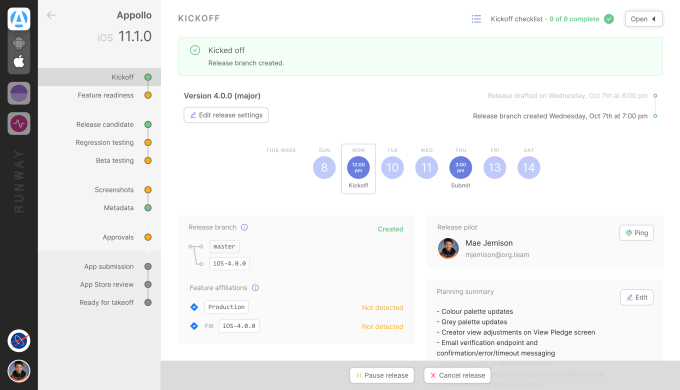 The startup is currently in pilot testing with a few early customers, including ClassPass, Kickstarter, Capsule and a few others. These customers, though not all yet paying clients, have already used the system in production for over 40 app release cycles.

The startup’s pricing will begin at $400 per app per month, which allows for unlimited release managers and unlimited apps, access to all integrations, and iOS and Android support, among other things. Custom pricing will be offered to those who want higher levels of customer support and consulting services.

The startup doesn’t have an exact ETA to when it will launch publicly as it’s working to onboard each customer and work closely with them to address their specific integration needs for now. Today, Runway supports integrations with the App Store, Google Play, GitHub, JIRA, Slack, Circle, fastlane, GitLab, Bitrise, Linear, Jenkins and others, but may add more integrations as customers require.

Runway’s team of four is mostly New York-based and is currently participating in Y Combinator’s Winter 2021 virtual program. The company hasn’t yet raised a seed round.

White-label voice assistants will win the battle for podcast discovery