A security lapse by a Jamaican government contractor has exposed immigration records and COVID-19 test results for hundreds of thousands of travelers who visited the island over the past year.

The Jamaican government contracted Amber Group to build the JamCOVID19 website and app, which the government uses to publish daily coronavirus figures and allows residents to self-report their symptoms. The contractor also built the website to pre-approve travel applications to visit the island during the pandemic, a process that requires travelers to upload a negative COVID-19 test result before they board their flight if they come from high-risk countries, including the United States.

But a cloud storage server storing those uploaded documents was left unprotected and without a password, and was publicly spilling out files onto the open web.

Many of the victims whose information was found on the exposed server are Americans.

TechCrunch discovered the exposure as part of a separate investigation into COVID-19 apps. After TechCrunch contacted Amber Group’s chief executive Dushyant Savadia, who did not comment when reached prior to publication, the data was secured.

The storage server, hosted on Amazon Web Services, was set to public. It’s not known for how long the data was unprotected, but contained more than 70,000 negative COVID-19 lab results, over 425,000 immigration documents authorizing travel to the island — which included the traveler’s name, date of birth and passport numbers — and over 250,000 quarantine orders dating back to June 2020, when Jamaica reopened its borders to visitors after the pandemic’s first wave. The server also contained more than 440,000 images of travelers’ signatures.

Two U.S. travelers whose lab results were among the exposed data told TechCrunch that they uploaded their COVID-19 results through the Visit Jamaica website before their travel. Once lab results are processed, travelers receive a travel authorization that they must present before boarding their flight.

Both of these documents, as well as quarantine orders that require visitors to shelter in place and several passports, were on the exposed storage server.

Travelers who are staying outside Jamaica’s so-called “resilient corridor,” a zone that covers a large portion of the island’s population, are told to install the app built by Amber Group that tracks their location and is tracked by the Ministry of Health to ensure visitors stay within the corridor. The app also requires that travelers record short “check-in” videos with a daily code sent by the government, along with their name and any symptoms.

The server exposed more than 1.1 million of those daily updating check-in videos. 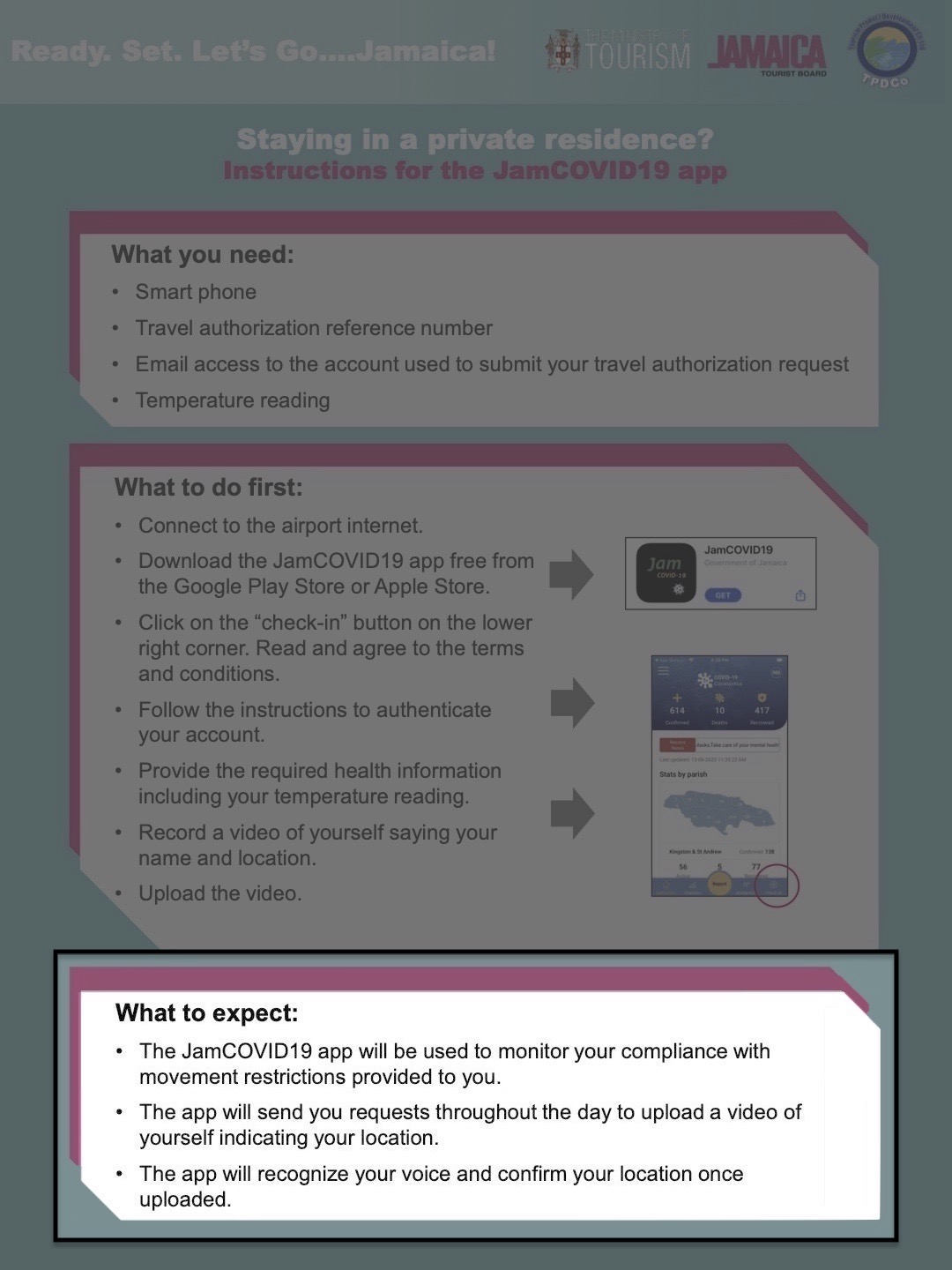 An airport information flyer given to travelers arriving in Jamaica. Travelers may be required to install the JamCOVID19 app to allow the government to monitor their location and to require video check-ins. (Image: Jamaican government)

The server also contained dozens of daily timestamped spreadsheets named “PICA,” likely for the Jamaican passport, immigration and citizenship agency, but these were restricted by access permissions. But the permissions on the storage server were set so that anyone had full control of the files inside, including downloading the entire server’s contents or deleting the files altogether. (TechCrunch did neither, as doing so would be unlawful.)

Stephen Davidson, a spokesperson for the Jamaican Ministry of Health, did not comment when reached, or say if the government planned to inform travelers of the security lapse.

In a brief statement after we published, the Jamaican government issued a statement confirming the vulnerability.

“A thorough investigation was immediately initiated to determine if there were any breaches in travelers’ data security, if the vulnerability had been exploited, and if there was a breach of any laws. At present, there is no evidence to suggest that the security vulnerability had been exploited for malicious data extraction prior to it being rectified,” the statement read.

According to one report, Amber’s Savadia said the company developed JamCOVID19 “within three days” and made it available to the Jamaican government in large part for free. The contractor is billing other countries, including Grenada and the British Virgin Islands, for similar implementations, and is said to be looking for other government customers outside the Caribbean.

Savadia would not say what measures his company put in place to protect the data of paying governments.

Jamaica has recorded at least 19,300 coronavirus cases on the island to date, and more than 370 deaths.

Updated with a statement from the Jamaican government.

Send tips securely over Signal and WhatsApp to +1 646-755-8849. You can also send files or documents using our SecureDrop. Learn more.