It seems that no-code is the tech watchword of the year. It refers to the ability to create something that normally would require a developer to code, and replace it with dragging and dropping components instead, putting the task in reach of much less technical business users. Today Okta announced new no-code workflows that provide a way to use identity as a trigger to launch a customer-centric workflow.

Okta co-founder and CEO Todd McKinnon says that the company has created a series of connectors to make it easier to connect identity to a workflow that includes sales and marketing tooling. This comes on the heels of the identity lifecycle workflows the company introduced at the Oktane customer conference in April.

“For this release we are introducing customer identity workflows which are focused on the connectors for all the customer-specific systems, things like Salesforce and Marketo and all the customer-centric [applications] that you’d want to do with your customer identities. And you can imagine over time that we’re going to expose this to more and more areas that will cover every kind of scenario a company would want to use,” McKinnon told TechCrunch.

McKinnon says that last year the company introduced Platform Services, which pulled apart the various pieces of the platform and exposed them as individual services, which bigger-company customers could tap into as needed. He says that this is an extension of that idea, but instead of having to get engineering talent to write complex code to tie the Okta service into say Salesforce, you can simply drag the Salesforce connector to your workflow.

As McKinnon describes this using early adopter MLB as an example, say someone downloads the MLB app, creates a log-in and signs in. At that point, if MLB marketing personnel wanted to connect to any applications outside of Okta, it would normally require leveraging some programming help to make it happen.

But with the new workflow tools, a marketing person can set up a workflow that checks the log-in for fraud, then sends the person’s information automatically into Salesforce to create a customer record, and also triggers a welcome email in Marketo — and all of this could be done automatically triggered by the customer sign up. 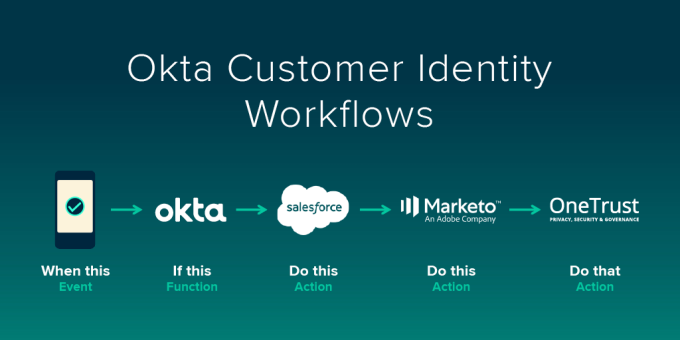 This functionality was made possible by the $52.5 million acquisition of Azuqua last year. As COO and co-founder Frederic Kerrest wrote in a blog post at the time of the acquisition (and we quoted in the article):

And that’s precisely the kind of approach the company is delivering this week. For now, it’s available as an early adopter program, but as Okta works out the kinks, you can expect them to build on this and add other enterprise workflow connectors to the mix as it expands this vision, giving the company a way to move beyond pure identity management and connect to other parts of the organization.