Heura, a vegan-friendly alternative to chicken that’s been cooked up by a Barcelona-based startup, has launched its first products in the U.K.

It’s working with local distributors The Vegan Kind and Planet Organic to sell three of its most popular products in the market: 100% vegetable original chicken bites, Mediterranean chicken bites and strips.

The 100% plant-based chicken is made from “European soy, olive oil, salt, and spices”.

Heura cites market research data from Mintel which suggests U.K. consumers are increasingly switching to buying plant-based meat — finding 65% of the British population now consumes plant-based meat, up from just 30% in 2017. It also suggests the coronavirus crisis is accelerating the shift toward plant-based diets as consumers seek cheaper alternatives to meat-based protein.

The startup has been building momentum for its soy-based chicken alternative since being founded back in 2017. Now it says its products are present in 3,000 points of sale in Spain, Andorra, Portugal, France, the Netherlands, Singapore, Hong Kong, Chile and the U.K.

In its home city of Barcelona, Heura has managed to get its plant-based meat onto the menu at a bunch of local restaurants — which looks like a savvy way of building brand recognition for an alternative protein.

Heura says it’s seen growth of 460% in the last year, and claims to be the fastest growing 100% plant-based meat company in Europe — also doing so without the kind of mega-fundraises pouring into alternative protein startups elsewhere. (According to Crunchbase, Heura has raised a mere $270,000 to date.)

Alternative protein companies have raised a whopping $1.5 billion through July of this year

Its boast for its faux chicken is it contains the same amount of protein as actual chicken but only one-third of the fat — hence touting it as “one of the market’s healthiest options” (with a further claim of 43% less fat than the industry average).

The relatively short list of ingredients — with the claim its products also contain fewer ingredients than the market average — is another facet it highlights, given how much processing can be involved in alternative meat/vegan products. 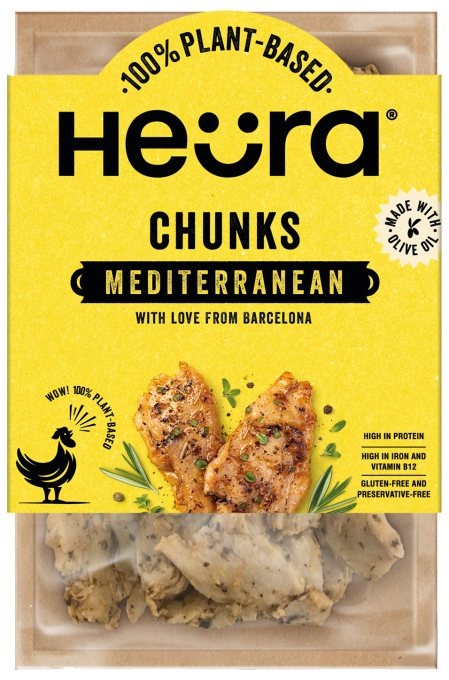 Commenting in a statement, Marc Coloma, CEO and co-founder, said: “The UK is the fastest-growing plant-based food market in Europe, and coupled with Heura‘s growth it means this is the right time for us to enter the UK market. We trust in the outstanding nutritional value of our products: our products have a clean label, are among the healthiest available, and our Mediterranean heritage means that we are the only plant-based meat made with olive oil.”

Another startup focused on plant-based chicken, Daring Foods, began selling its rival product in the U.K. at the start of last year.