The pandemic has accelerated adoption of a number of technologies, from online grocery to multiplatform gaming to streaming services and more. But one industry that has not benefited is traditional pay TV. According to new research from eMarketer, the cable, satellite and telecom TV industry is on track to lose the most subscribers ever. This year, over 6 million U.S. households will cut the cord with pay TV, bringing the total number of cord-cutter households to 31.2 million.

The firm says that by 2024, the number will grow even further, reaching 46.6 million total cord-cutter households, or more than a third of all U.S. households that no longer have pay TV.

Despite these significant declines, there are still more households that have a pay TV subscription than those that do not. Today, there are 77.6 million U.S. households that have cable, satellite or telecom TV packages. But that number has declined 7.5% year-over-year — its biggest-ever drop. The figure is also down from pay TV’s peak in 2014, the analysts said. 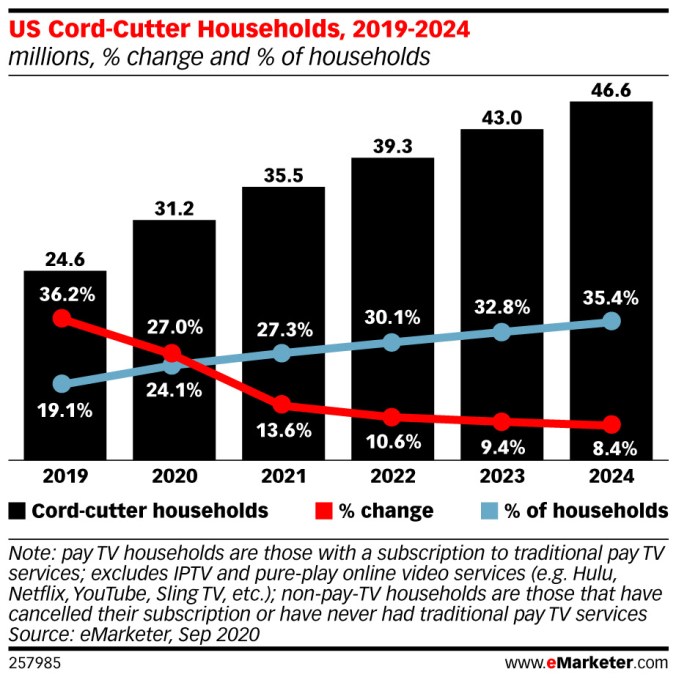 The pay TV losses, as you may expect, are due to the growing adoption of streaming services. But if anything, the pandemic has pushed forward the cord-cutting movement’s momentum as the health crisis contributed to a down economy and the loss of live sports during the first part of the year. These trends may have also encouraged more consumers to cut the cord than would have otherwise.

“Consumers are choosing to cut the cord because of high prices, especially compared with streaming alternatives,” said eMarketer forecasting analyst at Insider Intelligence Eric Haggstrom. “The loss of live sports in H1 2020 contributed to further declines. While sports have returned, people will not return to their old cable or satellite plans,” he added.

Pay TV providers have been attempting to mitigate their losses by shifting their focus to more profitable internet packages, which help power the services that consumers are turning to, like Netflix and Hulu.

Related to the pay TV decline, the loss in TV viewership is also impacting the advertising industry. 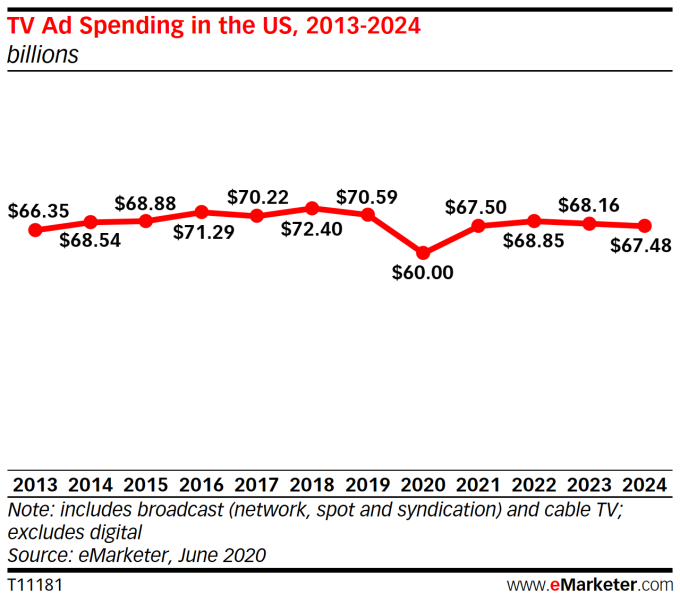 Some of this is pandemic-related, however, so TV ad dollars are expected to rebound some in 2021. But, overall, TV ad spending will continue to remain below pre-pandemic levels through at least 2024, the analysts said.

But it may never get back to “normal” levels in the future.

“While TV ad spending will rebound in 2021 with the broader economy, it will never return to pre-pandemic levels,” Haggstrom stated. “Given trends in cord-cutting, audience erosion and growth in streaming video, more ad dollars will shift from TV to digital video in the future.”