Palantir’s governance has been under an exacting lens from regulators the past few weeks as it prepares for a public direct listing on September 29th. In revision after revision of its S-1 filing to the SEC — now totaling eight including its draft registration statements — the company has had to continuously explain and re-explain what exactly it is trying to do to prevent retail investors from controlling the company.

Little surprise then that its fifth amended S-1 filing, published this morning, shows even more disclosures about the pitifully small governance control that retail investors will have upon the company’s public market debut.

In a newly added line, the company admits that “holders of our Class A common stock [i.e. the stock that will trade on NYSE starting September 29th] will hold approximately 3.4% of the voting power of our outstanding capital stock.”

“Voting power” is clearly very important to regulators — the term is now used 168 times in Palantir’s latest amended S-1 filing, up from just 58 in its original filing just a few weeks ago. In fact, take a look at this amazing chart on just how much Palantir has had to explain voting power to regulators over the past few weeks in filing after filing: 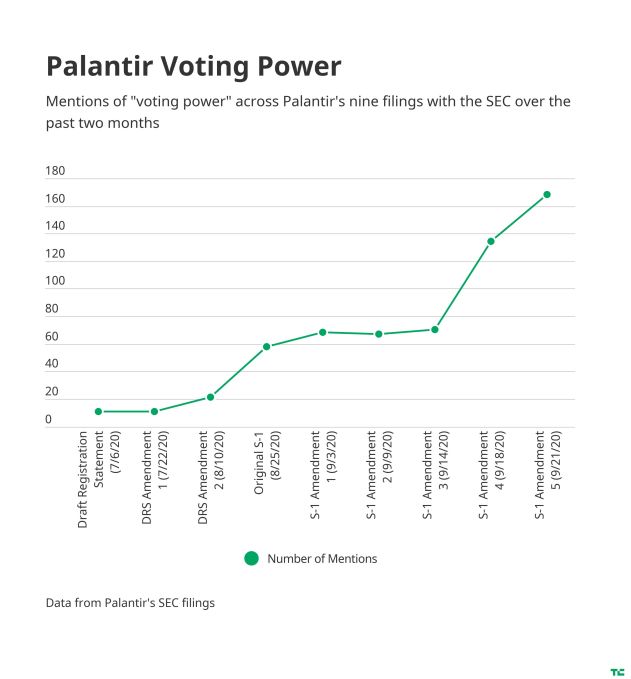 Indeed, just to prove how much voting power retail investors are giving up, the company published another column to its infamous founder-ownership table that I discussed at length on Friday. As part of the three-class voting share structure Palantir is using, its founders will retain outsized voting control of the company through what are known as Class F or founders shares, so long as they meet a minimal ownership threshold.

In its 4th revision to the SEC, Palantir tries to explain what the hell is going on

How unbalanced can that voting be? In the most extreme scenario according to Palantir’s newly updated table, its founders could control 68.099999% of the company’s vote while owning just 0.5% of the company’s shares.

In addition, the company has also added a new risk factor reminding owners of the company’s stock that Palantir can issue new stock at any time, and those newly issued shares will dilute retail investors even further in their voting rights relative to founders, who are offered a variable number of votes to ensure they maintain control of the company.

It gets worse though. Palantir has been promulgating this arcane mechanism over the last few amendments to the SEC that would allow its three founders — Alex Karp, Stephen Cohen and Peter Thiel — to designate certain shares to be held outside of their “founder shares” and therefore increase their overall voting power. In its last amendment, the only founder to designate shares in this way was Peter Thiel, who designated a huge bulk of his shares (13.4% of Palantir) as excluded from the founders share calculation.

Now in its latest update, Palantir says that founders will be able to increase their votes essentially willy-nilly by designating any or all of their shares as “Stockholder Party Excluded Shares,” which will be voted separately from their founder shares. And the right to do this will last from the company’s public debut all the way to “in the future.” In short, Palantir’s founders will hold 49.999999% control through their founder shares, plus the votes of any excluded shares, to be determined at any time. As of today, no shares have been designated as excluded, according to the filing.

That leads to one of my new favorite admissions in this whole governance saga: Palantir won’t be able to tell anyone what their actual voting power is, even when they are just about to vote. From its newly amended filing:

In addition, it may be very difficult for our Class A common stockholders to determine from time to time, including in advance of a meeting of stockholders, their individual or aggregate voting power due to the unique features of our multi-class capital structure, such as the variable number of votes per share of our Class F common stock and the ability of our Founders who are then party to the Founder Voting Agreement to unilaterally adjust their total voting power, for example, by designating shares as Stockholder Party Excluded Shares, as described in more detail herein.

The complexity of Palantir’s three-class voting system means that no one basically knows what the hell is going on. “Unilaterally adjust their total voting power” is not a democracy, indeed.

There’s good news though! Palantir might actually add — I kid you not — another class of voting shares just to make all of this even more complicated!

In another new disclosure this morning, the company writes that “In addition, in the future we could create a new class of equity securities with different economic or voting rights than existing classes,” and explains how that could upend the voting for the company further.

I joked last week that “For a company vaunted for its clandestine government work and strong engineering culture, you can’t help but wonder if the government’s bureaucratic norms and paperwork pushing are starting to flood into the Shire.” Well, the complexity is only getting worse and worse, and it doesn’t look good.

Tech companies, even those publicly traded, aren’t democracies. The two-class voting system most tech companies offer their founders and early investors are not democratic — some people get one vote per share while others get 10 votes per share. But it has become a norm whether we like it or not, and it’s directionally helped tech companies avoid the sort of hostile investor scenarios that have plagued other companies in the market.

Now, Palantir is stretching these notions to the extreme, trying to present as a shareholder-centered corporation when it is — let’s just admit it — an oligarchy of three.

Words don’t mean anything when the votes and the system aren’t there.