Another day, another video meeting. Or video happy hour. Or video birthday party. Another grid of 30 faces, all sort of trying to have one conversation.

While it’s beyond wonderful to have access to these big group video chat platforms during this pandemic dumpster fire, they’re all a bit… exhausting. Part of that is just the inherent weirdness of talking with a screen, but a big part of it is that video gatherings just don’t flow the way their real world counterparts do. When you get people together for a real-life party, you’re usually not cramming 30 people into one big group, the collective focus silently shifting to whichever face managed to get a word out. You break off into smaller groups. Everyone holds their own little conversations, moving to whichever chat catches their ear on the way to the food/bar/bathroom/whatever.

Rally, a company competing in the TechCrunch Disrupt Startup Battlefield this week, is building a video chat platform with this in mind. 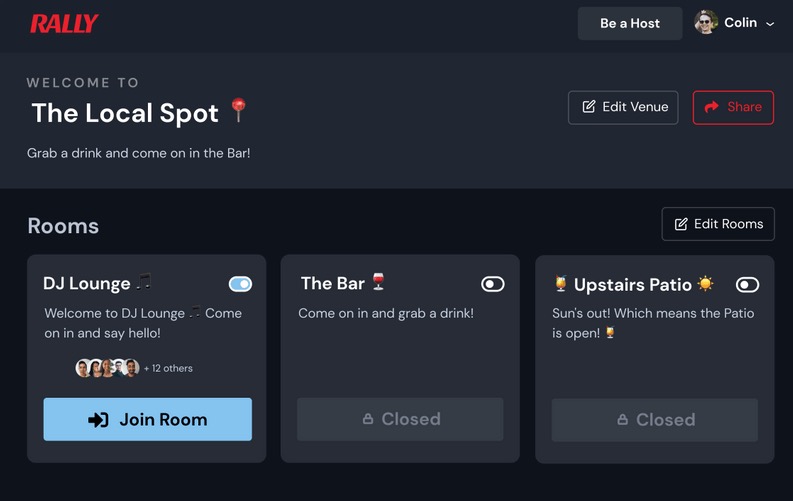 Rally builds group video calls around “tables” – think breakout rooms, except that you can juuuust barely hear the chatter from group to group. Not so much that it’s distracting, but enough that if another table starts talking about the latest episode of a show you love, it might grab your attention. You can hop to another table with a click, then jump right back into your last conversation just as quickly.

Tables live within “rooms,” each of which supports up to 35 users at a time. Larger events can have multiple rooms, allowing for things like live music events where each room plays a different genre.

The whole approach is meant to give the platform an almost physical feel, without requiring much more complexity than the Zooms and Meets of the world that everyone has already grown used to. There’s no 3D aspect to it, nor virtual animated avatars to learn to control.

Need to keep others from eavesdropping? Maybe you’re at a virtual pub trivia night, for example, and don’t want other teams overhearing your answers. A privacy toggle lets you lock down your tables conversation temporarily, and quickly take the walls back down when the time comes. You can also adjust the volume of the other tables if the background buzz gets too distracting.

Beyond being able to configure things and boot troublemakers from the event, hosts get a few bonus features that guests don’t. They can “take the stage” (alone or with a guest of their choosing) to make announcements to everyone at full volume, or they can opt to randomly shuffle the tables to discourage people from hanging with the same fellow event goers the whole time.

Rally co-founder Ali Jiwani tells me that their initial focus was a bit specific: They were building a platform for hosting live comedy events, so much of which depends on the energy of the crowd. When users started asking to use the platform for other things, they retuned it for broader use cases. People are still welcome to (and do!) host live comedy on the platform — it’s just not the primary focus anymore.

Rally is built to work within the browser without any downloads, with the catch that “browser” here currently means Chrome. It might work in other browsers, but Rally strongly suggests sticking with Chrome for now.