New York-based startup Muze is rethinking mobile messaging. While today’s messaging apps have expanded over the years to include support for sharing photos and videos, voice messages, reactions and more, Muze has fully redesigned the traditional messaging experience as a blank canvas, allowing for more creative interactions. The company’s new mobile app on iOS allows users to add text, pin their photos and GIFs, zoom in and out on content and even draw on the messaging canvas itself using different pen sizes and colors, among other things.

The end result looks nothing like your standard messaging conversation, where back-and-forth chat bubbles are interspersed with the occasional photo, video or link. Instead, a chat in Muze looks like some sort of collaborative art project — a collage of ideas, a meme board or perhaps a sketchpad, depending on how you use the app.

Despite offering a jumble of new features, Muze itself is simple to get started with and fairly easy to use, as well. 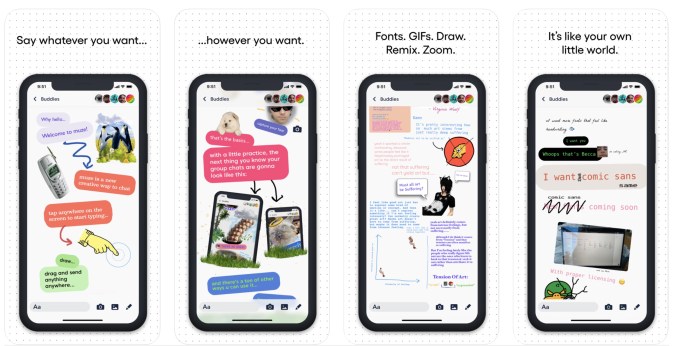 After signing up for an account on Muze and optionally syncing your contacts, you’re first presented with what otherwise appears to be a fairly typical messaging interface. There’s a text box to type in and buttons that let you quickly access your iPhone Camera or your phone’s photo gallery to add media to your chat.

To the right, you’ll notice a pen icon, as well — the first visual hint that Muze may be doing things differently. 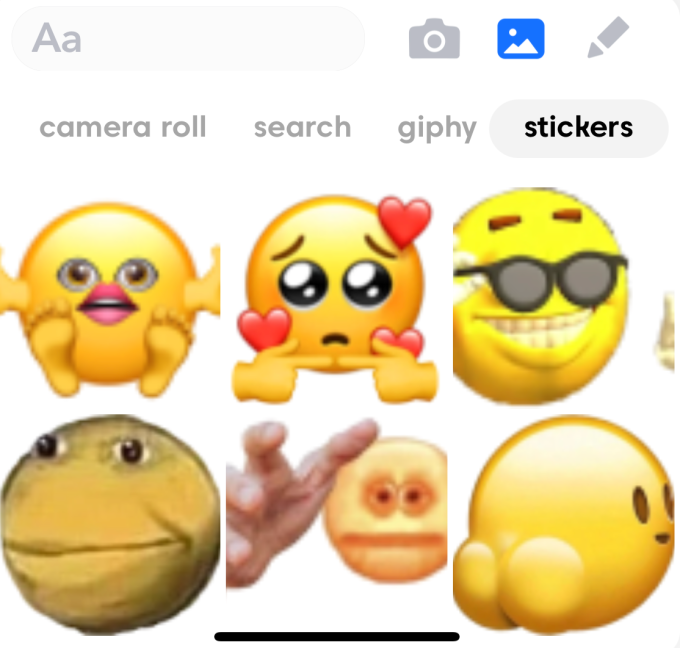 But as you dig into the features, you realize Muze offers more ways to interact. For instance, when you tap the photo gallery icon, you’ll discover Muze doesn’t only offer access to your own media — you can also search for photos, add GIFs from Giphy or grab one of dozens of custom stickers. These include stickers that let you frame the text, react to messages and decorate the screen, as well as a set of emoji mashups — like a pleading faced-emoji, surrounded by hearts, making the “But I’m Shy” symbol with its fingers (it’s a TikTok thing). The TikTok-favored Eye Mouth Eye emoji set is also plastered across a yellow smiley with open arms and tiny feet.

When you tap into the text box to begin typing, you’re presented with more of Muze’s expanded features. From here, you can tap buttons to change the font, text color or the alignment, or turn on the highlight color (the “bubble” color).

When you’re ready to enter the text, you can drag and drop the chat bubble anywhere on the screen, or make it larger or smaller. You can stick it over the top an image and so on.

The pen, meanwhile, lets you draw on anything on the screen — not just the blank canvas itself, but also on top of text, images, stickers or whatever else you’ve used to decorate your chat. 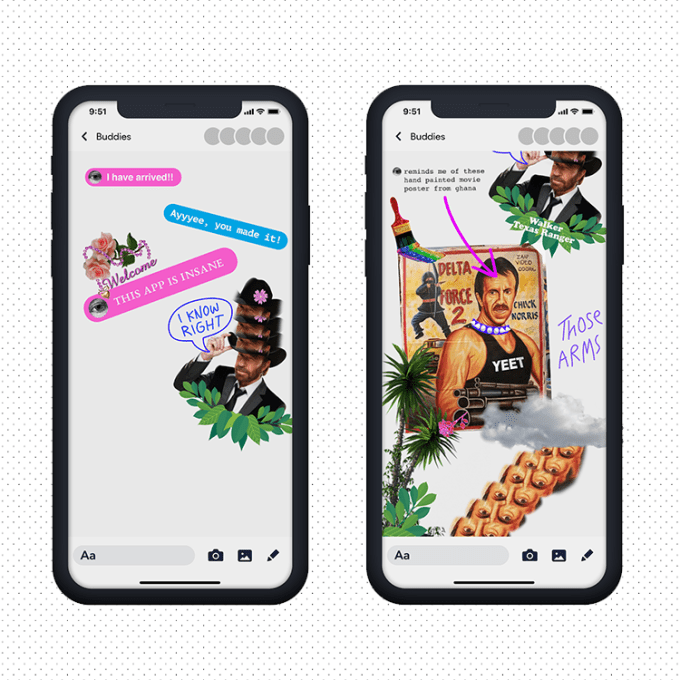 There’s only a slight learning curve to the app. For example, when you tap on the pen icon from the main chat screen, you may want to be able to draw underneath the current chat in a blank area of the canvas. But if you try to scroll down, you end up drawing on the screen, much to your surprise. To actually draw beneath the existing chat, you have to instead tap into the text box first, then tap a different pen icon that appears in the gray iOS toolbar. Of course, kids who can manage complex TikTok edits won’t struggle with these sorts of quirks. 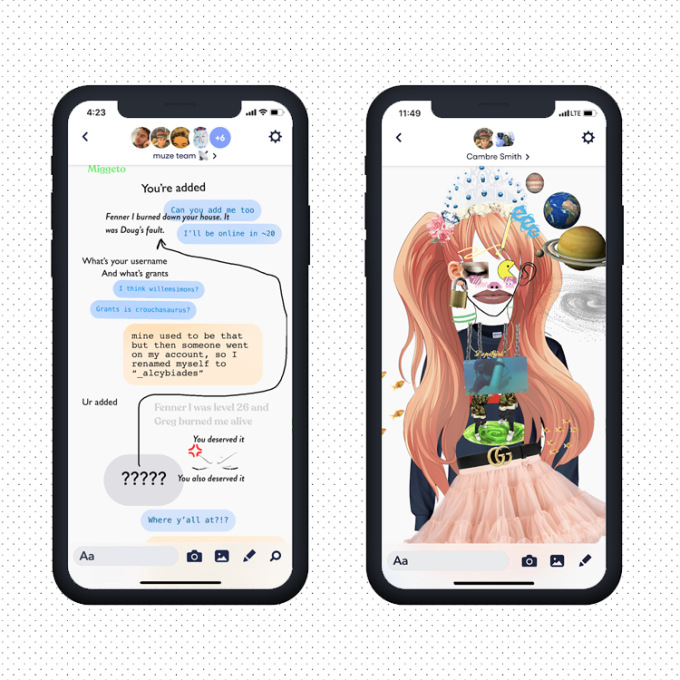 The app has a few other modern features, as well, like the ability to change the app icon from one of several it includes, for example. It also gives you the ability to theme the app not just with light or dark colors, as is now common, but also in shades like millennial pink, mint green, dark teal, forest green, purple and light blue.

Combined, its feature set delivers an app that has a lot of youth appeal — which makes sense, as Muze itself was designed by younger people who are used to communicating online with memes, GIFs and other creative content. Currently, Muze’s co-founders include Douglas Witte, Willem Simons and Grant Davis. Fenner Stevens is Muze’s CEO.

Though new to the market, Muze has already attracted the interest of investors. According to Crunchbase and SEC filings from 2019-2020, Muze has raised around $7 million in outside capital, including both equity and debt. On its AngelList profile, Muze’s backers include Sequoia Capital, Tribe Capital, Maveron, True Ventures, Grand Central Tech, Village Global and Hiten Shah. We understand a handful of other smaller funds and angels have also backed Muze.

The team at Muze declined to be interviewed about their plans for the business going forward, but confirmed the funding. The app is live on the App Store as a free download.