Back in 2016, Mobalytics wowed the judges at Disrupt SF with its data-based coach for the exploding competitive gaming world, winning the Startup Battlefield. The company is building on the success of the past few years with a new funding round and a compelling new collaboration with Tobii that uses eye-tracking to provide powerful insights into gamers’ skills.

Mobalytics began with the idea that, by leveraging the in-game data of a competitive esport like League of Legends (LoL), they could provide objective feedback to players along the lines of how fast or effective they are in different situations. Quantifying things like survivability or teamplay provides an analogue to similar measures in physical sports.

“On an athlete you have all these measurements, like pulse oximeters, ECGs, the 40-yard dash,” said Amine Issa, co-founder and “Warchief of Science.” Not so much with PC games. Their challenge at that time was to take the LoL API provided by Riot and transform it into actionable feedback, which the company’s success in the years since suggests they managed to do.

But Issa had always wanted to use another, more direct and objective measurement of a gamer’s mental processes: eye tracking. And last year they began an internal project to evaluate doing just that, in partnership with eye-tracking hardware maker Tobii.

“If you know where someone is looking, it’s the closest thing to knowing what they’re thinking,” Issa said. “When you combine that with the larger picture you can put together something to help them along. So we spent six months conducting research, taking players of different levels and roles and studying their eye tracking data to find some metrics we could organize the platform around.”

Not surprisingly, there are characteristics of the highly skilled (and practiced) that set them apart, and the team was able to collect them into a set of characteristics that any player can relate to.

Well, the gif compression isn’t so hot, but you get the idea — the purple square indicates attention. Image Credits: Mobalytics

“We had to think about how to build a product that people want to use. One thing we learned after TechCrunch is that even a simple score from 0-100 doesn’t work for everyone. You need to provide the context for that. So with something like eye tracking, you’re getting 30 data points per second — how do you break that down in a way that players understand it?”

Talking to professional gamers and coaches during the study helped them form the main categories that Mobalytics now tracks with the aid of a Tobii device, like information processing, map awareness and tunnel vision.

“It’s important to be able to tell a narrative to people. Say you get ganked a lot,” said Issa, referring to the unfortunate occurrence of being picked off by enemy players while alone. “Why are you getting ganked? If your vision score is high but map awareness is low, that’s one thing. Did you know all the information and go in arrogantly, or were you not aware? League is a very complicated game, so players want to know, in this specific fight, what did I do wrong, and what should I have done instead?”

That second question is a tougher one (though perhaps AI MOBA players may have something to say about it), but the metrics are powerful in and of themselves. “Pros are fascinated by this technology,” Issa said. “There’s a lot of ‘I had no idea’ moments. Coaches have said, these are my fastest players but it’s cool to see that as a quantifiable variable.” 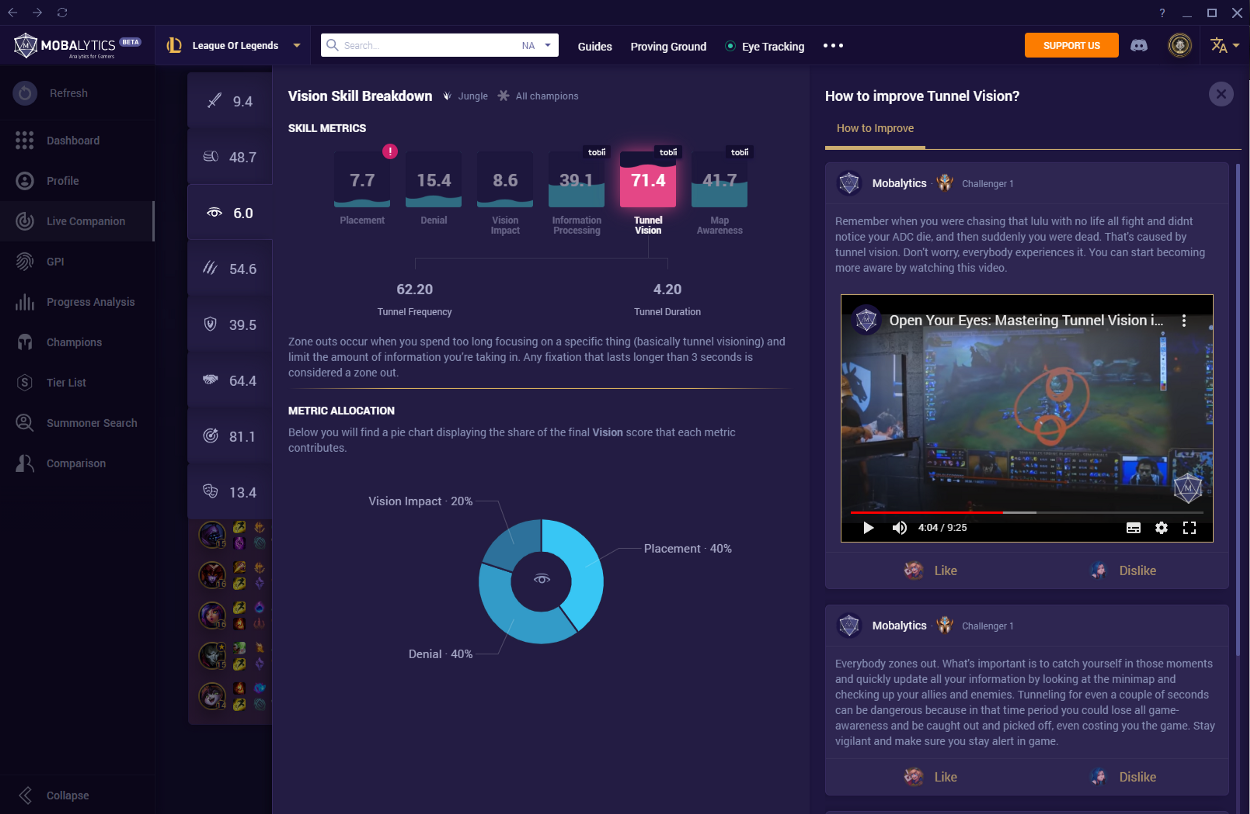 A post-game dashboard lets you know your strengths and weaknesses. Image Credits: Mobalytics

Tobii’s head of gaming, Martin Lindgren, echoed this feeling: “Pro teams aren’t interested in being told what to do. They want the data so they can draw their own conclusions.”

Tobii now has a gaming-focused eye-tracker and integrates with a number of AAA games, like Rise of the Tomb Raider, where it can be used in place of fiddly aiming using the analog sticks. As someone who’s bad at specifically that part of games, this is attractive to me, and Lindgren said opportunities like that are only increasing as gaming companies embrace both accessibility and try to stand out in a crowded market.

The companies have worked together to improve the eye-tracking coaching, for instance lowering the number of games a user must play before the system can accurately track their in-game actions; Lindgren said the collaboration with Mobalytics is ongoing — “definitely a long-term partnership” — in fact Tobii’s relationship with the founders predates their startup. 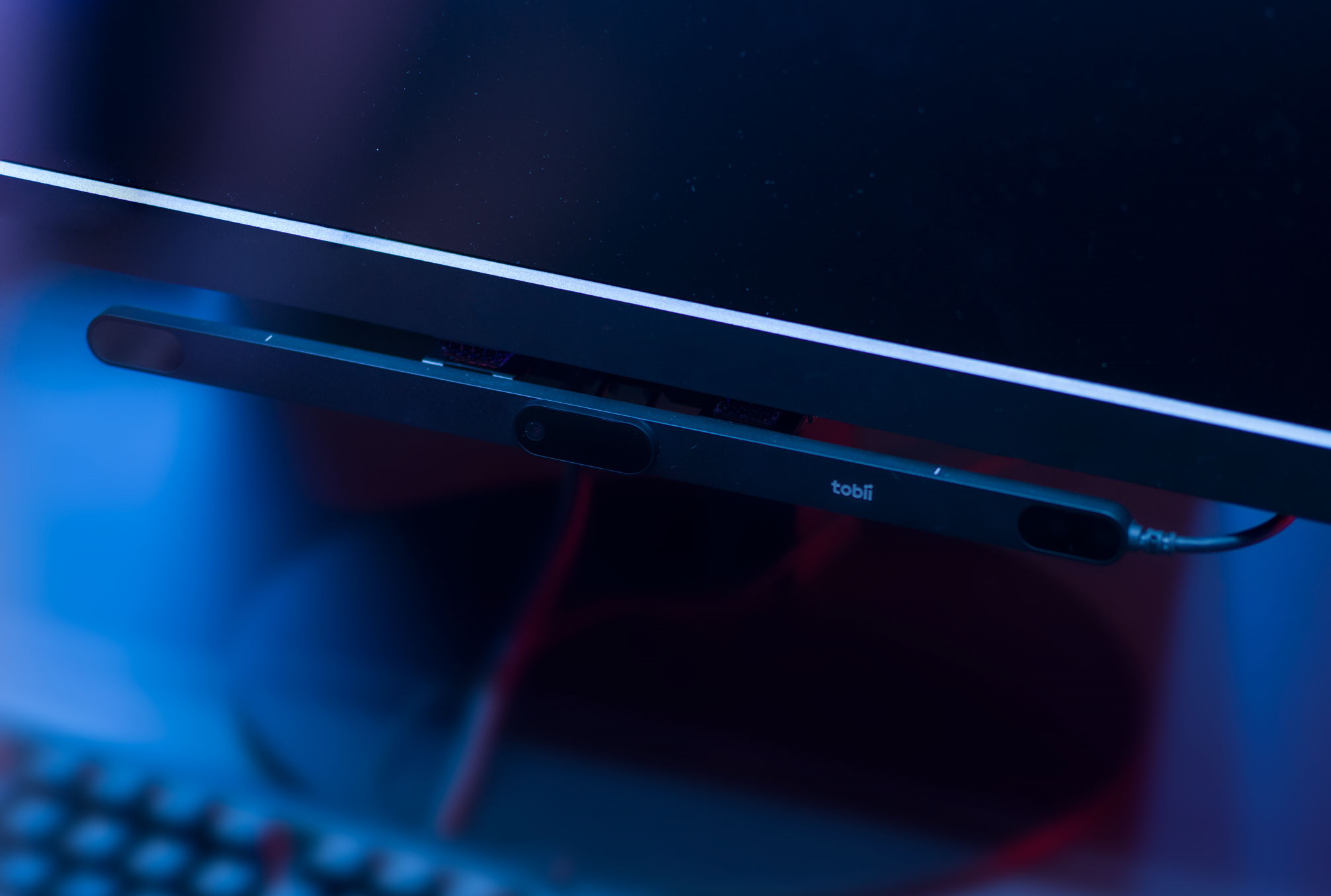 The ultimate goal of Mobalytics is to have a gaming assistant that adapts itself to your playing and preferences, making intelligent suggestions to improve your skills. That’s a ways off, but the company is getting the hang of it. Its first product, the LoL assistant, took a year to build, Issa said. A more recent one, for Legends of Runeterra, took three months. Teamfight Tactics took three weeks.

Admittedly it was more difficult to design one for Valorant, which, being a first-person shooter, is wildly different from the other games — but now that it’s done, a lot of that work could be applied to an assistant for Counter-Strike or Overwatch.

Expansion to other games and genres is the reason for raising an $11 million Series A, led by Almaz Capital and Cabra VC, with HP Tech Ventures, General Catalyst, GGV Capital, RRE Ventures, Axiomatic and T1 Esports participating.

“It was a very different experience from the post-TechCrunch one, where you’re in the spotlight and everyone’s throwing money your way,” said Issa. “But we’ve built a successful product on LoL, expanded to four games, today we have more than seven million monthly active users… Our plan is to double down on what’s worked for us and create the ultimate gaming companion.”