Meet Watchful, a Tel Aviv-based startup coming out of stealth that wants to help you learn more about what your competitors are doing when it comes to mobile app development. The company tries to identify features that are being tested before getting rolled out to everyone, giving you an advantage if you’re competing with those apps.

Mobile app development has become a complex task, especially for the biggest consumer apps, from social to e-commerce. Usually, mobile development teams work on a new feature and try it out on a small subset of users. That process is called A/B testing as you separate your customers in two buckets — bucket A or bucket B.

For instance, Twitter is trying out its own version of Stories called Fleets. The company first rolled it out in Brazil to track the reaction and get some data from its user base. If you live anywhere else in the world, you’re not going to see that feature.

There are other ways to select a group of users to try out a new feature — you could even take part in a test because you’ve been randomly picked.

“When you open the app, you’ll probably see a different version from the app I see. You’re in a different region, you have a different device,” co-founder and CEO Itay Kahana told me. He previously founded popular to-do app Any.do.

For product designers, it has become a nightmare as you can’t simply open an app and look at what your competitors are doing. At any point in time, there are as many different versions of the same app as there are multiple A/B tests going on at the same time.

Watchful lets you learn from the competition by analyzing all those different versions and annotating changes in user flows, flagging unreleased features and uncovering design changes.

It is different from other mobile intelligence startups, such as App Annie or Sensor Tower. Those services mostly let you track downloads and rankings on the App Store and Play store to uncover products that are doing well.

“We’re focused on everything that is open and visible to the users,” Kahana said. 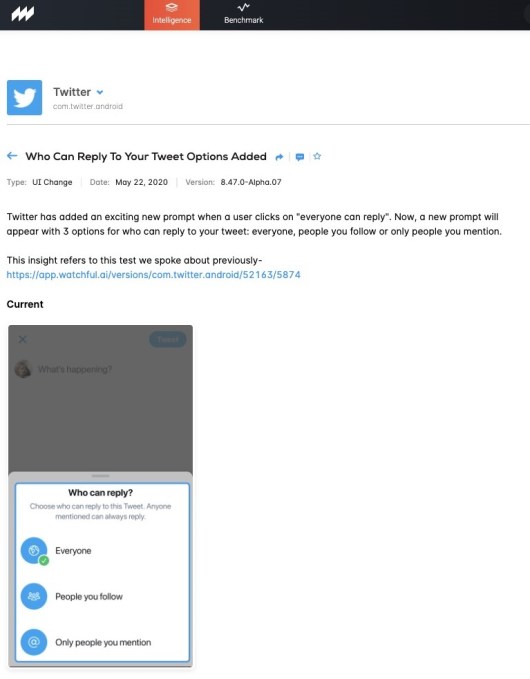 Like other intelligence startups, Watchful needs data. App Annie acquired a VPN app called Distimo and a data usage monitoring app called Mobidia. When you activate those apps, App Annie captures data about your phone usage, such as the number of times you open an app and how much time you spend in those apps.

According to a BuzzFeed News report, Sensor Tower has operated at least 20 apps on iOS and Android to capture data, such as Free and Unlimited VPN, Luna VPN, Mobile Data and Adblock Focus. Some of those apps have been removed from the stores following BuzzFeed’s story.

I asked a lot of questions about Watchful’s source of data. “It’s all real users that give us access to this information. It’s all running on real devices, real users. We extract videos and screenshots from them,” Kahana said.

“It’s more like a panel of users that we have access to their devices. It’s not an SDK that is hidden in some app and collects information and do shady stuff,” he added.

You’ll have to trust him as the company didn’t want to elaborate further. Kahana also said that data is anonymized in order to remove all user information.

Images are then analyzed by a computer vision algorithm focused on differential analysis. The startup has a team in the Philippines that goes through all that data and annotates it. It is then sent to human analysts so that they can track apps and write reports.

Watchful shared one of those reports with TechCrunch earlier this year. Thanks to this process, the startup discovered that TikTok parent company ByteDance has been working on a deepfake maker. The feature was spotted in both TikTok and its Chinese sister app Douyin.

But Watchful’s customers aren’t news organizations. The company sells access to its service to big companies working in the mobile space. Kahana didn’t want to name them, but it said it is already working with “the biggest social network players and the biggest e-commerce players, mainly in the U.S.”

The startup sells annual contracts based on the number of apps that you want to track. It has raised a $3 million seed round led by Vertex Ventures.