More evidence that Gen Z is switching to chat platforms for just about everything, including banking, emerges today in the news that Zelf, a fintech startup offering neobank-style services, is generating buzz amongst Gen-Zers in Spain and France. Its ability for users to interact solely via messaging has seen the startup hit over 260,000 card pre-orders since its launch in early April, according to the company, which is specifically targeting Gen Z. 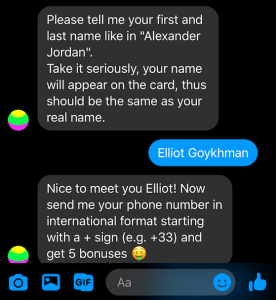 They are not alone. Other players in the “banking services via a messaging” space include Kotak Mahindra Bank in India (on WhatsApp) and ICICI in WhatsApp (India). However, neither of these can do actual provisioning of the card and addition to Apple Pay and Google Pay in the messengers, which is what Zelf can do.

With Zelf, users get an account and a virtual card via their Facebook Messenger, WhatsApp, Viber and Telegram accounts. For offline and online purchases Zelf supports Apple Pay and Google Pay. This lightweight onboarding means card issuance takes less than 30 seconds via a Passport or national ID. Users then get a virtual Mastercard debit card available in their favorite messenger app. Operating inside the EU’s “Single Euro Payments Area” means it’s pretty easy for the startup to scale its offering to other countries.

Part of the reason Zelf is confident it can scale is that it has signed a deal with Treezor, a Banking-as-a-Service platform based in France. Treezor is a fintech, registered with the ACPR, and was acquired in 2019 by the Société Générale group.

Elliot Goykhman, founder and CEO of Zelf, tells me: “With 84% of screen time taken by five apps, mostly messengers, we make sending and receiving money as easy as sending a message. Instant notifications, voice commands instead of buttons, simple invoicing and QR codes are some of the messenger banking features that will simplify the financial routine and bring money matters to the default apps of today — the messengers.” It will also soon work in iMessage and Discord, he says.

The business model for Zelf will come from interchange fees, premium account fees and — toward the end of this year — from loans, credit cards and voice memo-activated invoices.