One usual characteristic of a bootstrapped company is that its growth is slower than its VC-backed competitors. Bootstrapped marketing spend relies on revenue, revenue often relies on marketing spend, and the tension between the two can force slower growth. VC-backed companies, in contrast, can afford to spend ahead of revenue, often allowing them to grow more quickly.

Byte has found a much faster bootstrapped path to growth. The company, which was founded in 2017 and launched its products at the beginning of 2019, is on track to reach a $100 million revenue run rate in Q2 of this year, according to president Neeraj Gunsagar.

Unlike bootstrapped startups with first-time founders, byte (it’s officially lowercase) was founded by serial entrepreneurs Scott Cohen and Blake Johnson. Cohen founded his last company in 2011 (acquired by Deluxe Corporation in 2016) and Johnson founded Currency which sold to a private equity firm in 2017.

The duo brought on Gunsagar, formerly CMO at TrueCar where he spent eight years, to help lead the next phase of growth at the company and prepare the organization for international expansion and the next product rollout.

But let’s back up. Byte is an invisible-aligner-for-teeth company that has entered the ring with behemoths like Invisalign and SmileDirectClub, as well as a smattering of smaller at-home braces startups, like Candid. But there are several big differences between byte and its competition.

The first is its technology. Alongside impression kits and invisible aligners, byte also includes a device called HyperByte in all of its treatment plans. HyperByte is an extra in-mouth device that uses high-frequency vibrations (HFV) to send micropulses through the roots of the teeth and the surrounding bone, speeding up the process of alignment.

HFV treatment is FDA-cleared and offered in orthodontist offices around the country, but usually at a steep price.

HyperByte comes included with the cost of using byte’s service, which comes out to $1,895. (Folks can also pay via payment plan, called BytePay, which comes out to $349 down and $83/month for a little over two years.) The company also includes a whitening solution that can be used in conjunction with aligners. 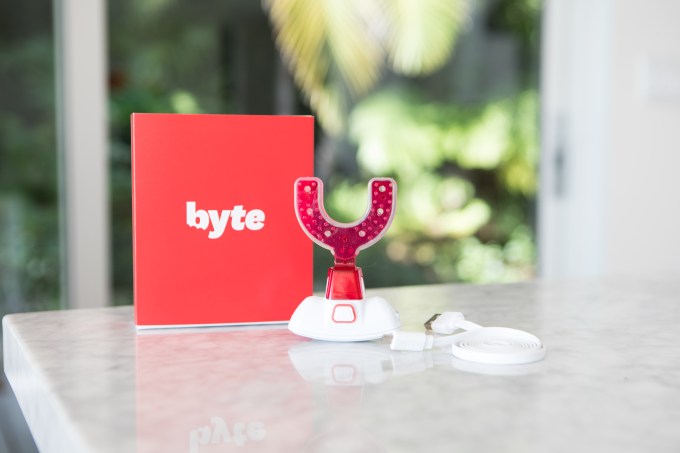 Byte’s treatment plans are overseen and reviewed by licensed orthodontists each and every time, and customers can be connected to an orthodontist or dentist should they run into any clinical issue during treatment.

In some cases, insurance may reimburse customers for their byte treatment.

In other words, byte is working to bring down both the cost of aligners and the time it takes to treat patients. Importantly, byte focuses exclusively on Phase 1 malocclusions, or small misalignments in the teeth like tiny gaps or slightly crooked teeth, and not complicated issues like overbites.

Most interestingly, byte saw explosive growth in the first quarter of 2020 — the company saw 10x revenue growth over the last three months, compared to the same period of 2019, and says that it is continuing at that 10x growth rate through Q2. Byte also told TechCrunch that it generated “positive EBITDA business pre-[COVID-19].” (As is the case with all private companies, these numbers come from byte and are not independently verified by TechCrunch.)

Part of that profitability story is improving economics. Toward the end of 2019, byte’s cost to acquire customers (CAC) dropped by 50 percent from end of 2019 through April of this year.

Byte isn’t the only company caught in the self-improvement updraft. “There’s sort of this trend toward self-improvement and using this time constructively,” Jaimee Minney, SVP of marketing and PR at Rakuten Intelligence, told CNBC. “Book sales increase, games and puzzles, and we have seen health and beauty start to grow as well, especially when you look at it on a year-over-year basis. That’s one I might keep an eye on, the self-improvement piece.”

Gunsagar explained that, historically, other companies may have thrown even more marketing money at this type of environment to boost growth even more.

“We won’t sacrifice our customer experience and we won’t sacrifice profitability as we grow the business,” said Gunsagar. “We don’t want to have too many impression kits going through the system because we want to make sure we can support it from a technology and experience standpoint. Every dollar we spend is still super profitable. I could go spend more money and still stay below our CAC goal of $150 and blow past $100 million in revenue this year, but I just wouldn’t be super confident that our NPS score or our customer experience wouldn’t be penalized.”

In formulating this careful growth strategy, Gunsagar and byte aren’t just looking at the broader tech ecosystem, where we’ve seen growth at all costs backfire on companies. They can find examples in their own industry — SmileDirectClub grew fantastically ahead of its initial public offering in September of 2019 only to feel backlash from some customers who were reportedly asked for an NDA in exchange for a refund.

One other important piece of byte’s strategy is an upcoming bytePro launch in conjunction with dentists and orthodontists. The idea is to grow alongside the dental and orthodontic industry, rather than cut these healthcare professionals out of the food chain.

With bytePro (launch TBD) dentists and orthodontists are included even more in the process. Incoming clients can ask to work with their own dentist or orthodontist as they go through the byte aligner process, and even get their impression kits in their dentist’s office rather than order them online. On the other side, dentists and orthodontists can join the bytePro network to be matched with new patients. Moreover, folks that purchase byte show an increased interest in caring for their teeth year round, according to the company, whether that be cleanings or other dental work. Byte aims to connect those folks with a good dentist or orthodontist to protect the investment they’ve made in their new smile.

Though byte is not venture-backed, the company has taken a small investment from actress and investor Kerry Washington, who has also invested in The Wing and Community. Washington serves as Creative Advisor at byte.

“When I was looking at ways to continue growing my portfolio, I focused on companies that I can be really proud to be associated with, and that pride comes from the quality of the product and how it improves the quality of people’s lives,” said Washington. “The idea of having a voice is really important. With byte, I said really early on ‘if you can’t open your mouth, you can’t find your voice’ and when you hear the stories from real customers, people were afraid to smile and afraid to speak and that’s when I realized that this is a tool that can better people’s lives in so many ways.”

Editor’s Note: This post has been updated to correct inaccuracies around Cohen and Johnson’s earlier roles, Washington’s official title, and the launch date for bytePro.