Among the many problems with the prison system are enormous fees for things like video calls, which a handful of companies provide at grossly inflated rates. Ameelio hopes to step in and provide free communication options to inmates; its first product, sending paper letters, is being welcomed with open arms by those with incarcerated loved ones.

Born from the minds of Yale Law students, Ameelio is their attempt to make a difference in the short term while pushing for reform in the long term, said co-founder and CEO Uzoma Orchingwa.

“I was studying mass incarceration, and the policy solutions I was writing about were going to take a long time to happen,” Orchingwa said. “It’s going to be a long battle before we can make even little inroads. So I was thinking, what can I do in the interim while I work on the longer-term project of prison reform?”

He saw reports that inmates with regular communication with loved ones have better outcomes when released, but also that in many prisons, that communication was increasingly expensive and restricted. Some prisons have banned in-person meetings altogether — not surprising during a pandemic — leaving video calling at extortionate rates the only option for speaking face to face with a loved one.

Sometimes costing a dollar a minute, these fees add up quickly and, naturally, this impacts already vulnerable populations the most. Former FCC Commissioner Mignon Clyburn, for whom this was an issue of particular interest during her term, called the prison communication system “the clearest, most glaring type of market failure I’ve ever seen as a regulator.”

It’s worth noting that these private, expensive calling services weren’t always the norm, but were born fairly recently as the private prison industry has expanded and multiplied the ways it makes money off inmates. Some states ban the practice, but others have established relationships with the companies that provide these services — and a healthy kickback to the state and prison, of course.

This billion-dollar industry is dominated by two companies: Securus and Global Tel Link. The service they provide is fairly rudimentary compared with those we on the outside take for granted. Video and audio calls are scheduled, recorded, skimmed for keywords and kept available to authorities for a few months in case they’re needed.

At a time when video calls are being provided for free to billions around the world who have also been temporarily restricted from meeting in person, charging at all for it seems wrong — and charging a dollar a minute seems monstrous.

Ameelio’s crew of do-gooder law students and developers doesn’t think they can budge the private prison system overnight, so they’re starting with a different product, but one that also presents difficulties to families trying to communicate with inmates: letters.

Written mail is a common way to keep in contact with someone in prison, but there are a few obstacles that may prevent the less savvy from doing so. Ameelio facilitates this by providing an up-to-date list of correct addresses and conventions for writing to any of the thousands of criminal justice facilities around the country, as well as the correct way to look up and identify the inmate you’re trying to contact — rarely as simple as just putting their name at the top.

“The way prison addresses work, the inmate address is different from the physical address. So we scraped addresses and built a database for that, and built a way to find the different idiosyncrasies, like how many lines are necessary, what to put on each line, etc.,” said co-founder Gabe Saruhashi.

Once that’s sorted, you write your letter, attach a photo if you want, and it’s printed and sent (via direct-mail-as-a-service startup Lob). It’s easy to see how removing the friction and cost of printing, addressing and so on would lead to more frequent communication. 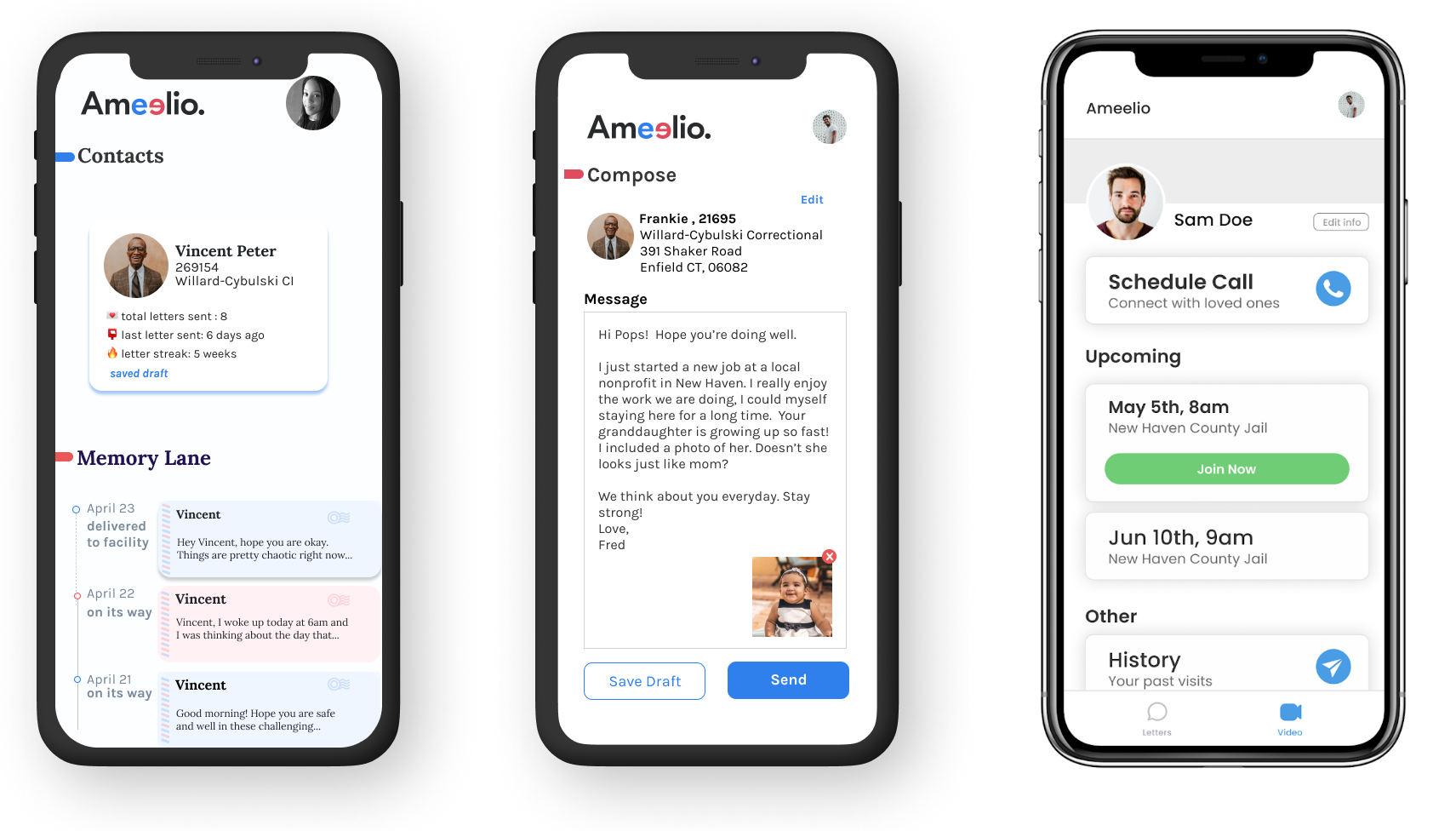 Since starting a couple months ago and spreading word of the service on Facebook groups and other informal means, they’ve already sent more than 4,000 letters. But while it’s nice for people to be able to send letters, Ameelio plans to cater to larger organizations that use mail at larger scales.

“The communications challenges that families have are the same challenges that criminal justice organizations and lawyers have when communicating with their clients,” explained Orchingwa. They have to manage the addresses, letter-writing and sending, and a network of people to check on recipients and other follow-up actions. “We’re talking to them, and a lot were very interested in the service we’re offering, so we’re going to roll out a version for organizations. We’re creating a business model in which these organizations, and some of them are well funded, can pay us back but also pay it forward and help keep it free for others.” 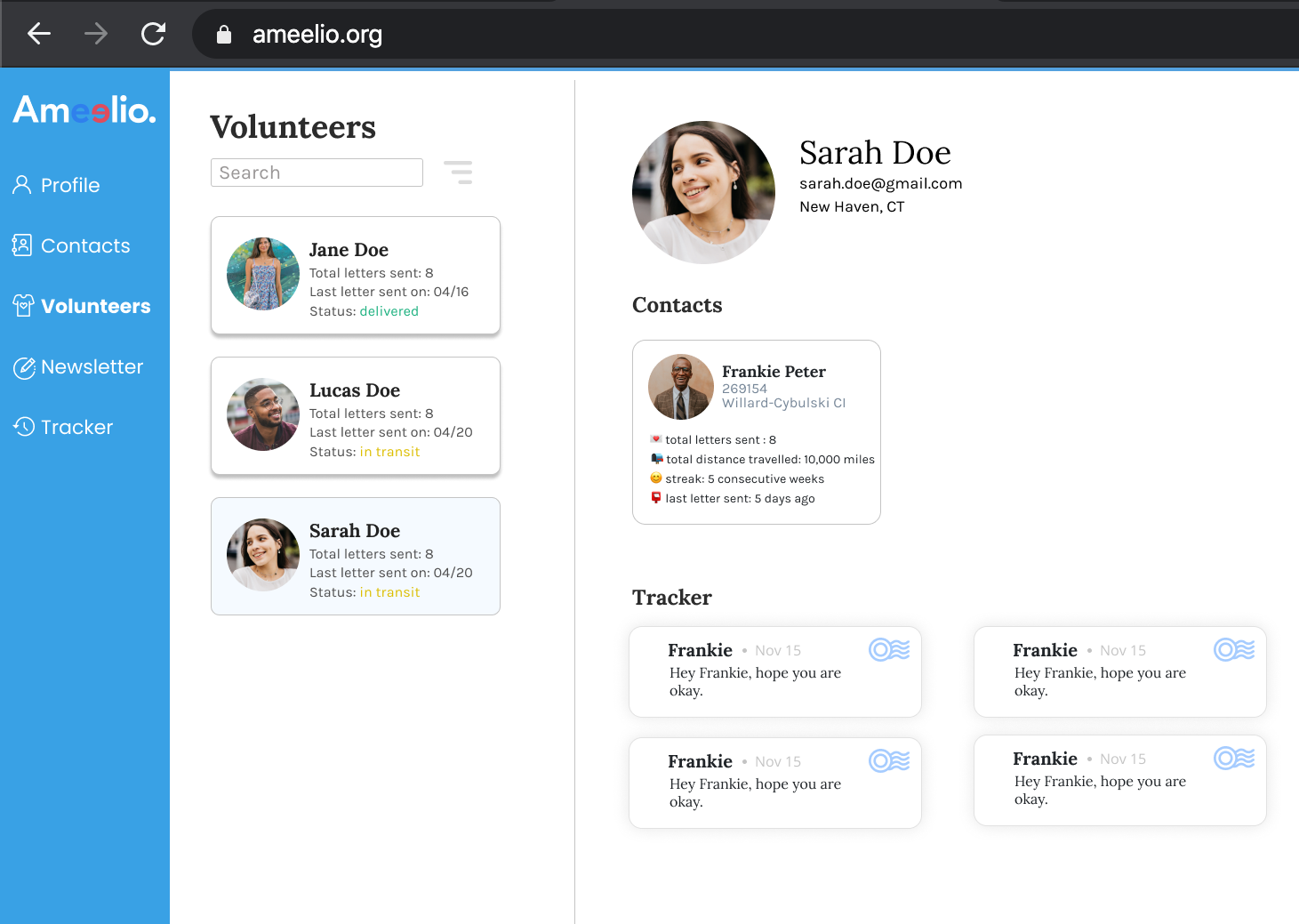 How an organization might use and track letter-writing campaigns

Sending letters is just the opening play for Ameelio, though, but it’s also a way to make the contacts they need and research the market. Outcry against the private calling systems has been constant, but the heterogeneous nature of prisons run under state policies means “we don’t have one system, we have 51 separate systems,” as Orchingwa put it. That and the fact that it makes a fair amount of money.

“There’s a lot of movement around getting Securus and Global Tel out,” he said. “But it would shift from families to the state paying, so they need to make back the money they were making from kickbacks.”

Some states have banned paid calls or never allowed them, but others are only changing their policies now in response to external pressure. It’s with these that Ameelio hopes to succeed first.

“We can start in states where there’s no strong relationship to these companies,” said Orchingwa. “You’re going to have state and county officials being asked by their constituents, ‘why are we using them when there’s a free alternative?’ ”

You may wonder whether it’s possible for a fresh young startup to build a video calling platform ready for deployment in such a short time. The team was quick to explain that the actual video call part of the product is something that, like sending letters, can be accomplished through a third party.

“The barrier right now is not at all the video infrastructure — enterprise and APIs will provide that. We already have an MVP of how that will look,” said Saruhashi. Even the hardware is pretty standard — just regular Android tablets stuck to the wall.

“The hard part is the dashboard for the [Department of Corrections],” Saruhashi continued. “They need a way to manage connections that are coming in, schedule conversations, get logs and review them when they’re done.”

But they’re also well into the development of that part, which ultimately is also only a medium-grade engineering challenge, already solved in many other contexts.

Currently the team is evaluating participation in a number of accelerators, and is already part of Mozilla’s Spring MVP Lab, the precursor to a larger incubator effort announced earlier today. “We love them,” said Mozilla’s Bart Decrem.

Right now the company is definitely early stage, with more plans than accomplishments, and they’re well aware that this is just the start — just as establishing better communications options is just the start for more comprehensive reform of the prison and justice system.