As millions of students and teachers shift to learn from home in response to the novel coronavirus disease, modern-day flashcard business Quizlet has raised $30 million in a Series C round led by General Atlantic.

Quizlet’s chief executive officer Matthew Glotzbach said that the new funding values the business at $1 billion, up five times from its last funding round in 2018. Quizlet’s total known financing is more than $60 million.

The fresh funding comes off the heels of unprecedented usage for Quizlet, which connects students to virtual flashcards and study guides. Once a user makes a guide, they can share a unique link with friends and collaborate ahead of a test. School shutdowns due to COVID-19 have caused students to flock to the platform as they look for new ways to study, retain information and collaborate.

Students ask over 1 billion questions on Quizlet each week and more than 400 million virtual study guides have been created. The San Francisco-based startup is also seeing “massive international growth,” with 200% to 400% new user growth across its top international markets.

The company declined to share daily numbers, but said it sees over 50 million users every month, which is similar to a statistic it shared two years ago.

Glotzbach noted that more than two-thirds of high schoolers in the United States use Quizlet. At least half of U.S. college students have used the platform. That kind of market hold only comes from two aspects: volume and variety. The site’s curriculum spans from acid and bases in chemistry to the science of roller coasters to the art of sensation and perception.

As for why a flash card business could be worth a billion dollars, it isn’t. But an AI-powered tutoring platform could be, and that’s exactly what Quizlet is focusing on as a core product move in the foreseeable future. Quizlet Learn, Glotzbach says, is the most popular feature on the site and uses AI to help users study topics and learn mastery by a certain time. 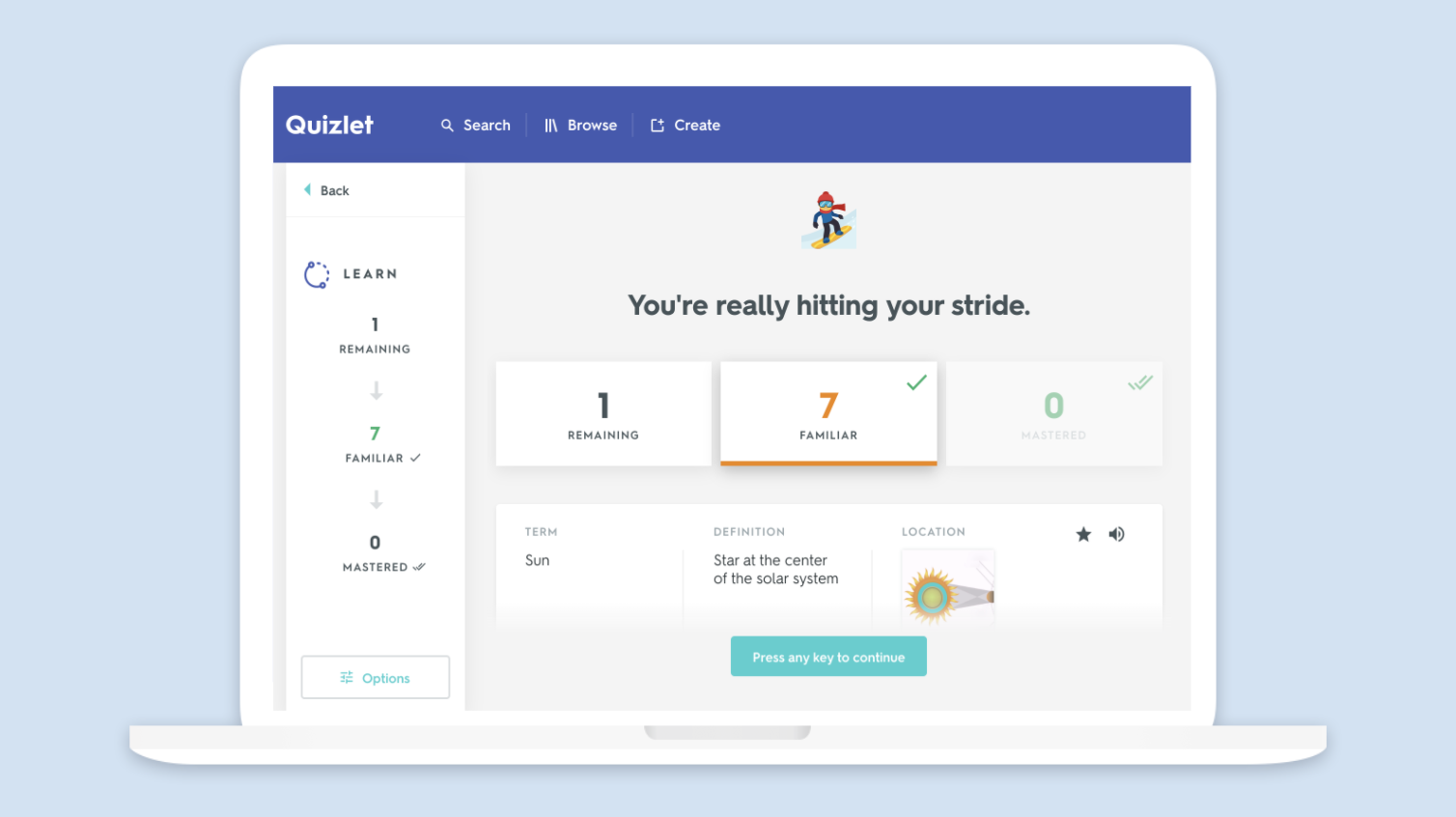 Quizlet’s newest investor, General Atlantic, has invested in a number of edtech companies around the world, like OpenClassrooms, Ruangguru, Unacademy and, recently, Duolingo. Glotzbach said that Quizlet will continue to expand to new international markets, but does not have any “specific targets or names.” It is currently used in 130 countries across 19 localized languages, so it has a lot of room to grow.

Quizlet did not comment on profitability, but said its revenue is growing 100% year over year.

Quizlet views its closest competitor as Chegg, an online textbook company that went public in November 2013. Glotzbach says it has a larger audience and bigger footprint on education in the United States. He noted that other learning apps like Duolingo are vertical and subject focused, while Quizlet has a more broad curriculum.

While the new funding officially makes Quizlet a unicorn, Glotzbach said that when he announced the funding to his staff he compared the company more closely to a camel.

“We’ve built a very large-scale business with products that are easy to use, easy to get up and running and easy to share,” he said. “We use a low-cost subscription model that is very inexpensive so we get a lot of people upgrading to our premium product, and it drives economic business.”

Slow and steady is part of its founding story: Quizlet was founded in 2005 by a 15-year-old, Andrew Sutherland. It was fully bootstrapped until 2015. Glotzbach, who was previously an executive at YouTube, then joined in 2016.

But while it has humble roots, this new round was closed in the heat of a global pandemic.

“We saw record drops in the stock market multiple days in a row while trying to both manage [the round] and move an entire company to remote work,” he detailed. “It was closed during such a volatile time.”

Glotzbach said that the round was more opportunistic, and that it didn’t “need an injection of capital to make ends meet.”

Therefore, Quizlet’s new shiny valuation is yet another example of how edtech has found both revitalization and green shoots during this catastrophic time, and how remote learning is going from a tool to a necessity for many learners.