Facebook is today rolling out a tool that will allow users in the U.S. and Canada to export their Facebook photos and videos to Google Photos. This data portability tool was first introduced in Ireland in December, and has since been made available to other international markets.

To use the feature, Facebook users will need to click on “Settings,” followed by “Your Facebook Information,” then “Transfer a Copy of Your Photos and Videos.” Facebook will ask you to verify your password to confirm your identity in order to proceed. On the next screen, you’ll be able to choose “Google Photos” as the destination from the “Choose Destination” drop-down box that appears. You’ll also need your Google account information to authenticate with its service before the transfer begins. 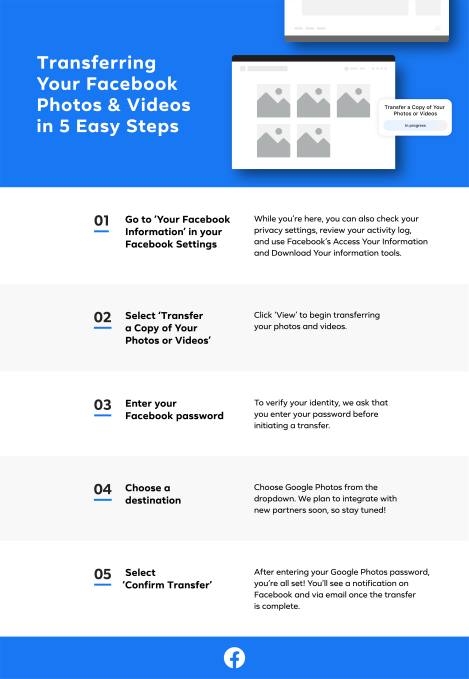 The tool’s release comes about by way of Facebook’s participation in the Data Transfer Project, a collaborative effort with other tech giants, including Apple, Google, Microsoft and Twitter, which focuses on building out common ways for people to transfer their data between online services.

Of course, it also serves as a way for the major tech companies to fend off potential regulation, as they’ll be able to point to tools like this as a way to prove they’re not holding their users hostage — if people are unhappy, they can just take their data and leave!

Facebook’s Director of Privacy and Public Policy Steve Satterfield, in an interview with Reuters on Thursday, essentially confirmed the tool is less about Facebook being in service to its users, and more about catering to policymakers’ and regulators’ demands.

“…It really is an important part of the response to the kinds of concerns that drive antitrust regulation or competition regulation,” Satterfield told the news outlet.

The launch also arrives conveniently ahead of a Federal Trade Commission hearing on September 22 that will be focused on data portability. Facebook said it would participate in that hearing, if approached, the report noted.

In Facebook’s original announcement about the tool’s launch last year, it said it would expand the service to include more than just Google Photos in the “near future.”

The transfer tool is not the only way to get your data out of Facebook. The company has offered Download Your Information since 2010. But once you have your data, there isn’t much else you can do with it — Facebook hasn’t had any large-scale rivals since older social networks like Myspace, FriendFeed (RIP!) and Friendster died and Google+ failed.

In addition to the U.S. and Canada, the photo transfer tool has been launched in several other markets, including Europe and Latin America.