Media software maker Plex has released two new projects today from its internal R&D group, Plex Labs. One is an updated take on the classic Winamp player it calls Plexamp, and another is a dedicated app for Plex server administration. The projects are meant to appeal largely to Plex power users who take full advantage of Plex’s software suite, which has grown over time from being only a home media solution to a one-stop shop for everything from live TV to streaming audio.

The first of the new apps, Plexamp, is actually a revamp of the first Plex Labs project released. In December 2017, Plex introduced its own music player, whose name Plexamp was a nod to the Winamp player it aimed to replace. The project, like others from Plex Labs, was built by Plex employees in their spare time.

The goal with the original Plexamp was to offer a small desktop player that could handle any music format. The app let you use media keys for playing, pausing and skipping tracks and it worked offline when the Plex server ran on your laptop. It also offered visualizations to accompany your music that pulled from the album art.

While the original app ran on Mac or Windows, the new release works across five platforms, now including iOS, Android and Linux.

The app itself has been completely redone, as well — rewritten from scratch, in fact. And it’s tied to Plex’s subscription service, Plex Pass — meaning you’ll need to be a paying customer to use it. 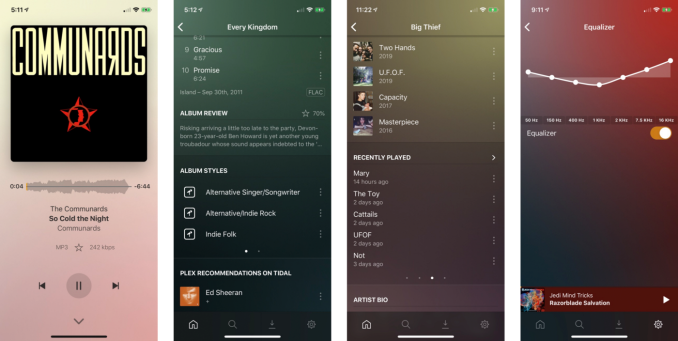 The company explains the original version of Plexamp had issues around portability and licensing; it didn’t have an easy way to add functionality; and it was built with React, which tied it to the web.

To create the new Plexamp (version 3.0), Plex built an audio player library called TREBLE on top of a low-level commercial audio engine. TREBLE has been shipping in Plex’s commercial applications, but this release brings it to Plexamp. The addition helped make the app portable across almost all desktop and mobile platforms, as was it being rewritten in React Native.

But the app really sells itself to longtime Plex users, as Plexamp lets you go back to see your own “top personal charts” for what you’ve listened to the most in years past. (Sort of like a Plex version of Apple Music’s Replay playlists).

Plexamp 3.0 also introduces a feature that lets you build your own mixes by picking a set of artists. Plus it offers a more expansive list of stations, supports offline listening and improves its search functionality.

The new Recent Searches area, for example, will save your search results from across servers, as well as TIDAL and podcasts. And a new Recent Plays feature shows you the music you consciously chose to play, again including across all servers and TIDAL.

There are some little touches, too, that show the personal care that went into the app’s design — like the way Plexamp uses album art and a process called “UltraBlur” to give each artist and alum page its own look. Or how there are options for light and dark — and lighter and darker — themes. The other big new release from Plex Labs is the new Plex Dash app.

This mobile and tablet app lets you keep a close eye on your personal media server, including a way to see all playbacks even across multiple servers, plus other administrative features. Plex suggests you it run on the iPad you have mounted in the wall — like in your fancy media room, I guess — but for us poorer folks, it runs on your smartphone, too.

It’s a power user tool, but one that will be welcomed for those fully immersed in a Plex-run home media setup. (And also a good way to respond to criticism that Plex is too focused today on its streaming and TV options, and not its core home media software customer base.)

Like Plexamp, the new Plex Dash requires a Plex Pass subscription and runs on iOS and Android.

The apps launched today are notable as they’re the first to arrive from Plex Labs since the original release of Plexamp in 2017 and because they require a subscription in order to work.

Plex at the end of 2019 said it had 15 million registered households using its service. Though the service is profitable, only a small percentage are paid subscribers. New apps with extra features, then, could convince more Plex users to upgrade.