Autonomous delivery startup Nuro has been granted a permit to begin driverless testing on California’s public roads, paving the way for the company to roll out commercial operations throughout the state.

Nuro, which raised $940 million from SoftBank Vision Fund last year, is allowed to put two of its low-speed electric R2 delivery vehicles on public roads in parts of Santa Clara and San Mateo counties, according to the California Department of Motor Vehicles, the agency that regulates autonomous vehicle testing in the state.

The driverless permit allows the vehicles to operate at a maximum speed of 25 mph and only in fair weather conditions on streets with a speed limit of no more than 35 mph, the DMV said Tuesday. The permit covers nine cities, including Atherton, East Palo Alto, Los Altos Hills, Los Altos, Menlo Park, Mountain View, Palo Alto, Sunnyvale and Woodside.

“The safety of the motoring public is the DMV’s top priority, and we do not give out these permits lightly,” DMV Director Steve Gordon said in statement. “Nuro has met the DMV’s requirements to receive this permit to test their driverless delivery vehicles on California’s public roads.”

Nuro won’t start its driverless testing right away due to stay-at-home orders issued by Gov. Gavin Newsom because of the spreading COVID-19 pandemic. The company will be actively engaging in logistical planning for the day public road testing can begin, Nuro’s chief legal and policy officer David Estrada said in a blog post Tuesday. “Our hope is that residents of neighboring cities and counties will see R2 on the road soon,” he said.

A path to commercialization

While 65 companies have an active permit to test autonomous vehicles with a human safety driver, Waymo, and now Nuro, are the only companies allowed to operate driverless vehicles on California’s public roads.

Nuro might end up being the first company to actually use it. Waymo, the former Google self-driving project that spun out to become a business under Alphabet, received the first permit in October 2018. However, the company has never conducted driverless testing on public roads there. Instead, Waymo has focused its efforts on Arizona, where it already operates a robotaxi service called Waymo One and it has a clearer commercial path.

In California, the commercial path is muddled for most AV developers. Under state law, the DMV regulates autonomous vehicle testing. If a company wants to transport passengers — essentially operating a ride-hailing service — it must get an Autonomous Vehicle Passenger Service pilot permit from the California Public Utilities Commission.

The CPUC lets companies use their self-driving vehicles to transport people. However, they can’t charge for rides and the vehicles must have safety drivers behind the wheel.

Nuro’s R2 vehicle isn’t designed for people, only packages. While the company can’t charge a delivery fee, it can generate revenue by working with local retailers to launch a commercial delivery business using the autonomous vehicles.

Nuro will start with free deliveries to select customers in Mountain View and the surrounding area, Estrada said, adding that this will allow a formal delivery service in partnership with local brands and retailers.

The company already has its eyes on a statewide delivery service. Estrada said Nuro will apply for a full commercial deployment permit to bring its services to California residents throughout the state.

“Putting our driverless R2 delivery vehicles on the road will be an important first for our company and the self-driving industry. But it is just a glimmer of what is to come,” Estrada said. “We have always believed in the transformative power of autonomous vehicles, and in the climate of COVID-19 we understand their potential even more deeply.” 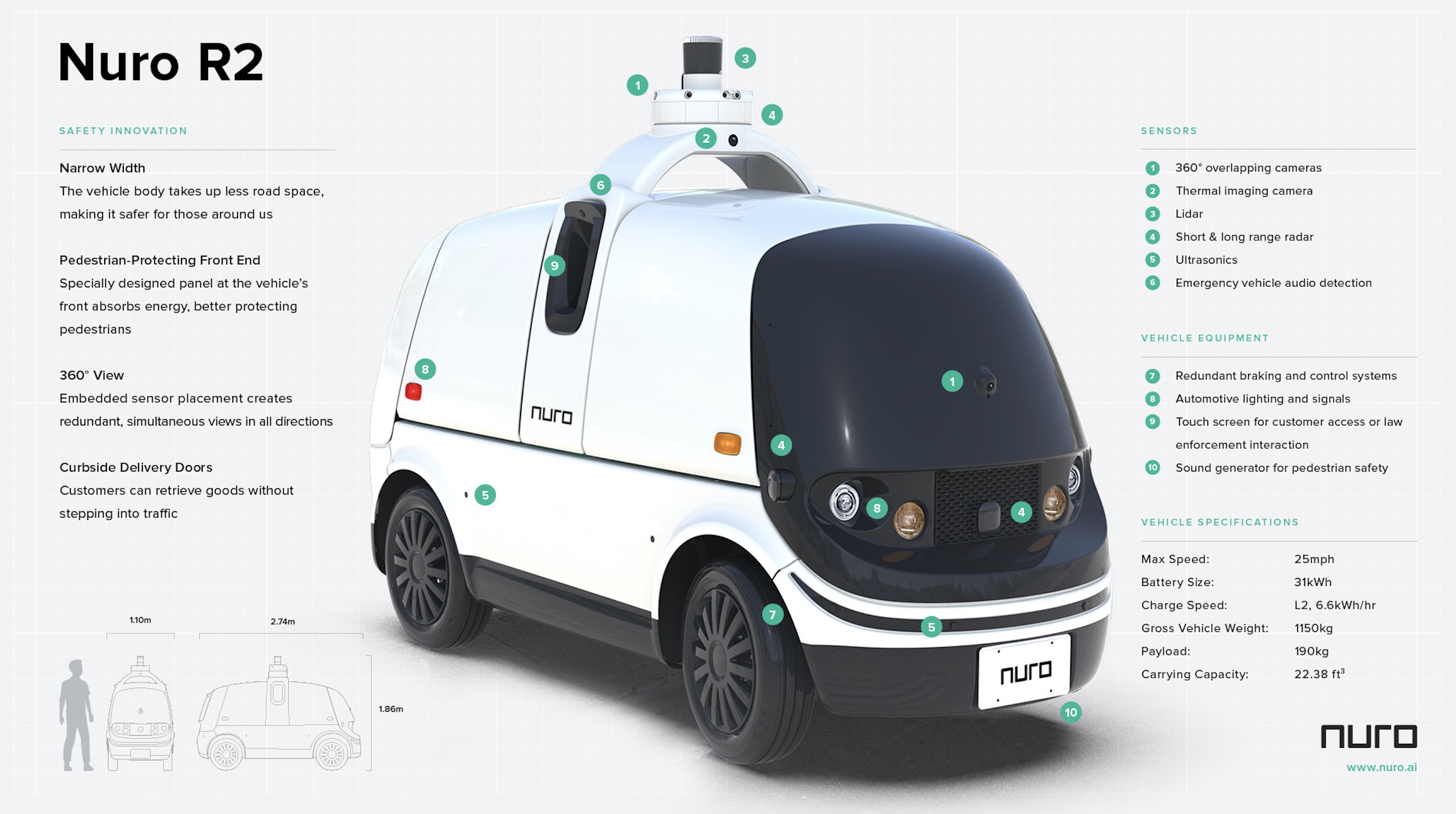 Nuro was founded in June 2016 by Google alums Dave Ferguson and Jiajun Zhu. The company was issued an AV testing permit — with a human safety operator — in 2017. Initially, the company used modified Toyota Prius sedans for testing as well as for pilot grocery deliveries in Arizona and Texas.

The company transitioned in December 2018 to the R1, the first step toward a vehicle designed exclusively for packages.

Its second-generation, vehicle called the R2, was introduced in February 2020. The R2, which was designed and assembled in the U.S. in partnership with Michigan-based Roush Enterprises, is equipped with lidar, radar and cameras to give the “driver” a 360-degree view of its surroundings. However, it is missing a few features typically required by the U.S. Department of Transportation’s National Highway Traffic Safety Administration.

After three years of working with regulators, Nuro received a driverless exemption from NHTSA for its R2 vehicle. The exemption allows the vehicle to operate even though it doesn’t have side-view mirrors, a windshield and a rear-view camera that shuts off when driving forward.

This exemption is different from the one that GM is currently pursuing for its self-driving unit Cruise. That vehicle, which is not considered a low-speed vehicle, has a much longer list of exemptions.