Disney+ has arrived in the land of Bollywood. The company on Friday (local time) rolled out its eponymous streaming service in India through Hotstar, a popular on-demand video streamer it picked up as part of the Fox deal.

To court users in India, the largest open entertainment market in Asia, Disney is charging users 1,499 Indian rupees (about $19.5) for a year, the most affordable plan in any of the more than a dozen markets where Disney+ is currently available.

Subscribers of the revamped streaming service, now called Disney+ Hotstar, will get access to Disney Originals in English as well as several local languages, live sporting events, dozens of TV channels, and thousands of movies and shows, including some sourced from HBO, Showtime, ABC and Fox that maintain syndication partnerships with the Indian streaming service. It also maintains partnership with Hooq — at least for now.

Unlike Disney+’s offering in the U.S. and other markets, in India, the service does not support 4K and streams content at nearly a tenth of their bitrate.

Disney+ Hotstar is also offering a cheaper yearly premium tier, priced at Rs 399 (about $5.3), that will offer subscribers access to movies, shows (but not those sourced from aforementioned U.S. networks and studios) and live sporting events; it won’t include Disney Originals.

It also holds the global record for most simultaneous views on a live stream, about 25 million — more than thrice its nearest competitor.

Prior to today’s launch, Hotstar offered its premium plans at 999 Indian rupees, and 365 Indian rupees. Existing subscribers won’t be affected by the price revision for the duration of their current subscription. 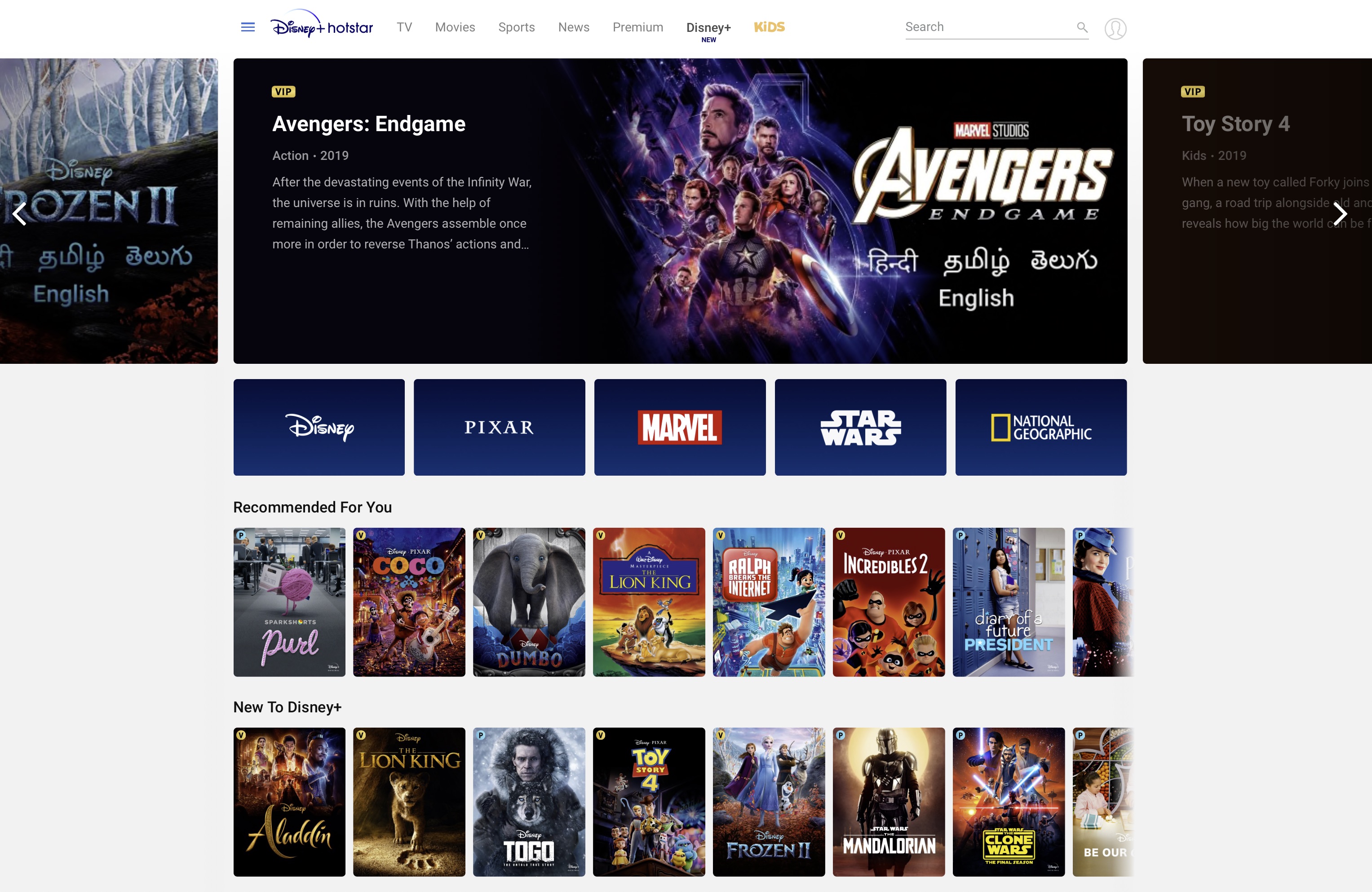 The service, run by Indian conglomerate Star India, offers access to about 80% of its catalog at no cost to users. The company monetizes these viewers through ads.

But in recent years, the company has begun to explore ways to turn its users into subscribers. Two years ago, Hotstar stopped offering cricket match streaming to non-paying users.

Disney+ will compete with several dozen services in India.

Disney+ will compete with more than three dozen international and local players in India, including Netflix, Amazon Prime Video, Times Internet’s MX Player (which has over 175 million monthly active users), Zee5, Apple TV+ and Alt Balaji, which has amassed over 27 million subscribers.

“The arrival of Disney+ in India is another case study in the globalization of entertainment in the digital era. For decades, the biggest companies in the world have expanded their reach into different markets. But it’s new, and actually quite profound, that everyone on earth receives the very same version of such a specific cultural product,” Matthew Ball, former head of strategic planning for Amazon Studios, told TechCrunch.

As in some other markets, including the U.S., streaming services have inked deals with telecom networks, TV vendors, cable TV operators and satellite TV players to extend their reach in India.

Most of these streaming services monetize their viewers by selling ads, and those who do charge have kept their premium plans below $3.

Why that figure? That’s the number most industry executives think — by spending years in the Indian market — that people in the country are willing to pay for viewing content. The average of how much an individual pays for cable TV, for instance, in India is also about $3.

“I think everyone is still trying to sort out the right pricing. It’s true the average Indian consumer is used to far lower prices and can’t afford more. However, we need to focus on the consumers likely to buy this, who have the requisite broadband access and income, etc,” said Ball. 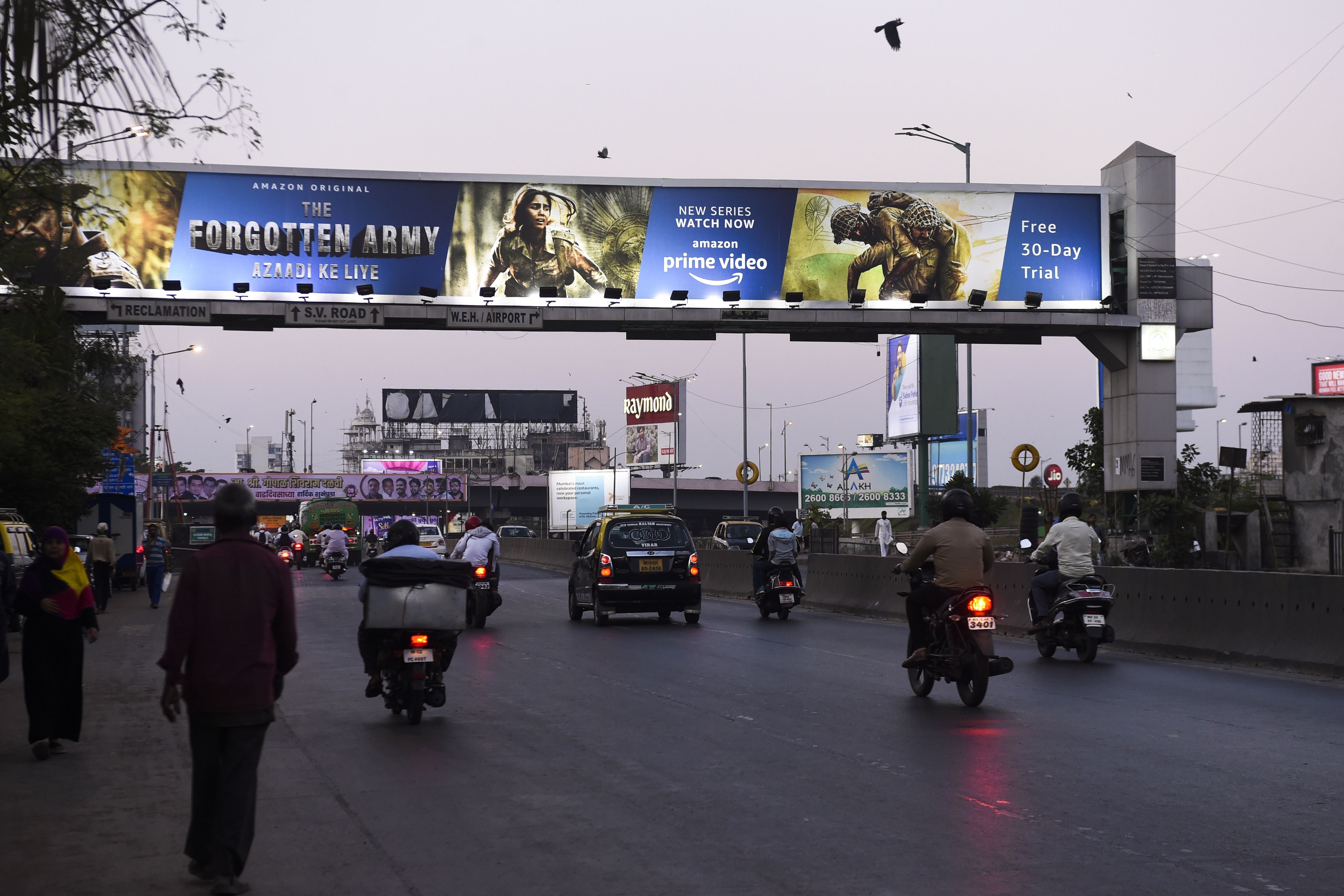 Commuters drive along a road past a billboard in Mumbai advertising the Amazon Prime Video online series “The Forgotten Army”. (Photo by INDRANIL MUKHERJEE / AFP via Getty Images)

At stake is India’s booming on-demand video streaming market that, according to Boston Consulting Group, is estimated to grow to $5 billion from half a billion two years ago.

Hotstar’s hold on India could make it easier for Disney+, which has launched in more than a dozen markets and has amassed over 28 million subscribers.

As the country spends about two more weeks in lockdown that New Delhi ordered last month to curtail the spread of coronavirus, this could also compel many to give Disney+ a try.

On the flip side, if the lockdown is extended, the current season of IPL, which has been postponed until mid-April, might be further delayed or cancelled altogether. Either of those scenarios could hurt the reach of Hotstar, which sees a massive drop in its user base after the conclusion of each cricket tournament.

Disney initially planned to launch its streaming service in India on March 28, the day IPL was supposed to commence. But the company later postponed the launch by six days.

Industry executives told TechCrunch that if IPL is cancelled, it could severely hurt the financials of Hotstar, which clocks more than 50% of its revenue during the 50-odd days of the cricket season.

Some said Disney+’s premier catalog might not be relevant for most of Hotstar’s user base, who seem to care about this streaming service only during the cricket season or to catch up on Indian soap operas.

Hotstar has also received criticism for censoring more content on its platform than any other streaming service in India. Last month, Hotstar blocked from streaming on its platform an episode of “Last Week Tonight with John Oliver” that was critical of Indian Prime Minister Narendra Modi. YouTube made that segment available without any edits.

John Oliver slammed Hotstar for censoring the episode and noted that the streaming service had additionally edited out parts from his older episodes where he made fun of Disney. In 2017, Hotstar also edited out a segment from Oliver’s show in which he mocked Samsung for the Galaxy Note 7 fiasco. Hotstar and Samsung had a commercial partnership.