Twenty-eight percent of a nurse’s time is wasted on low-skilled tasks like fetching medical tools. We need them focused on the complex and compassionate work of treating patients, especially amid the coronavirus outbreak. Diligent Robotics wants to give them a helper droid that can run errands for them around the hospital. The startup’s bot Moxi is equipped with a flexible arm, gripper hand and full mobility so it can hunt down lightweight medical resources, navigate a clinic’s hallways and drop them off for the nurse.

With the world facing a critical shortage of medical care professionals, Moxi could help healthcare centers use their staffs as efficiently as possible. And because robots can’t be infected by COVID-19, they’re one less potential carrier interacting with vulnerable populations. 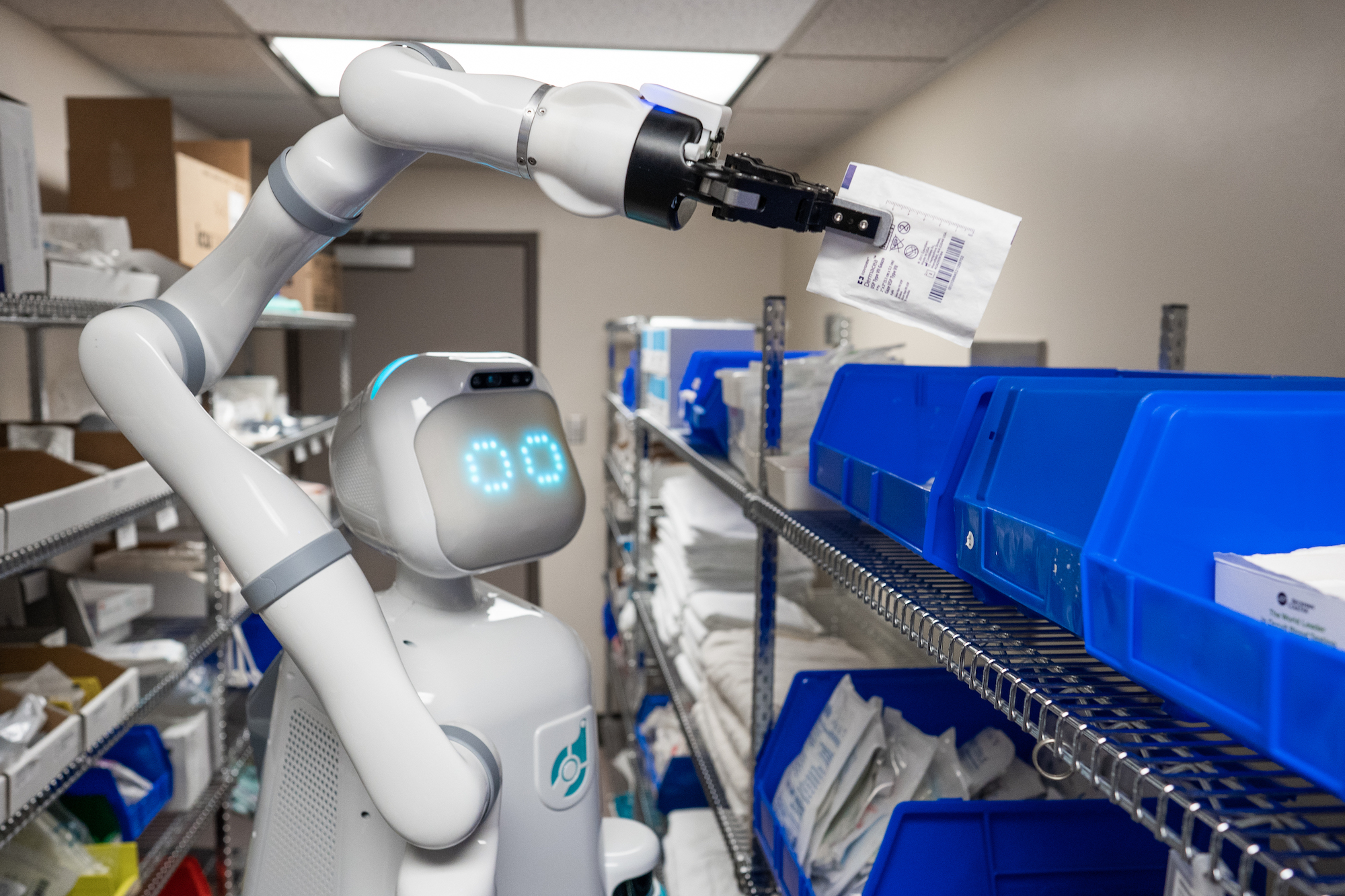 Today, Diligent Robotics announces its $10 million Series A that will help it scale up to deliver “more robots to more hospitals,” CEO Andrea Thomaz tells me. “We’ve been designing our product, Moxi, side by side with hospital customers because we don’t just want to give them an automation solution for their materials management problems. We want to give them a robot that frontline staff are delighted to work with and feels like a part of the team.” 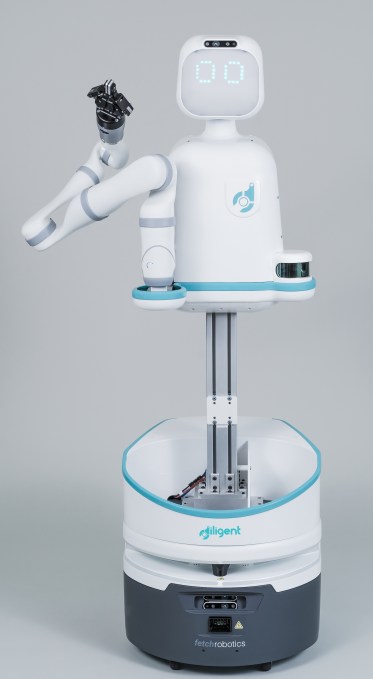 The round, led by DNX Ventures, brings Diligent Robotics to $15.75 million in total funding that’s propelled it to the fifth generation of its Moxi robot. It currently has two deployed in Dallas, Texas, but is already working with two of the three top hospital networks in the U.S. “As the current pandemic and circumstance has shown, the real heroes are our healthcare providers,” says Q Motiwala, partner at DNX Ventures. The new cash from DNX, True Ventures, Ubiquity Ventures, Next Coast Ventures, Grit Ventures, E14 Fund and Promus Ventures will help Diligent Robotics expand Moxi’s use cases and seamlessly complement nurses’ workflows to help alleviate the talent crunch.

Thomaz came up with the idea for a hospital droid after doing her PhD in social robotics at the MIT Media lab. Her co-founder and CTO Vivian Chu had done a master’s at UPenn on how to give robots a sense of touch, and then came to work with Thomaz at Georgia Tech. They were inspired by a study revealing how nurses spent so much time acting as hospital gofers, so in 2016 they applied for and won a National Science Foundation grant of $750,000 that funded a six-month sprint to build a prototype of Moxi.

Since then, 18-person Diligent Robotics has worked with hundreds of nurses to learn about exactly what they need from an autonomous assistant. “Today you will go about your day, and you probably won’t interact with any robots….we want to change that,” Thomaz tells me. “The only way you can really bring robots out of the warehouses, off of the factory floors, is to build a robot that can work in our dynamic and messy everyday human environments.” The startup’s intention isn’t to fully replace humans, which it doesn’t think is possible, but to let them focus on the most human elements of their jobs.

Moxi is about the size of a human, but designed to look like an ’80s movie robot so as not to engender an uncanny valley cyborg weirdness. Its head and eyes can move to signal intent, like which direction it’s about to move, while sounds let it communicate with nurses and acknowledge their commands. A moving pillar lets it adjust its height, while its gripper hand and arm can pick and put down smaller pieces of hospital equipment. Its round shape and courteous navigation makes sure it can politely share crowded hallways and travel via elevator. 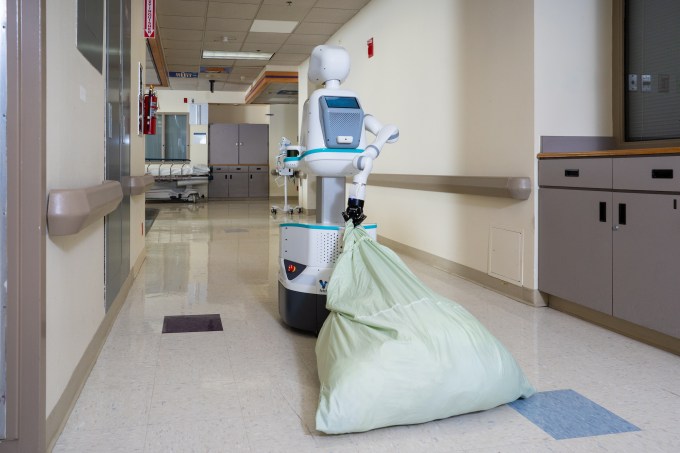 Diligent Robotics’ solution engineers work with hospitals to teach Moxi how to get around and what they need. The company hopes to eventually build the ability to learn and adapt right into the bot so nurses can teach it new tasks on the fly. “The team continues to demonstrate unmatched robotics-specific innovation by combining social intelligence and human-guided learning capabilities,” says True Ventures partner and Diligent board member Rohit Sharma.

Hospitals pay an upfront fee to buy Moxi robots, and then there’s a monthly fee for the software, services and maintenance. Thomaz admits that “Hospitals are naturally risk-averse, and can be wary to take up new technology,” so the startup is taking a slow and steady approach to deployment so it can convince buyers that Moxi is worth the learning curve.

Diligent Robotics will be competing with companies like Aethon’s TUG bot for pulling laundry and pharmacy carts. Other players in the hospital tech space include Xenex’s machine that disinfects rooms with light, and surgical bots like those from Johnson & Johnson’s Auris and Intuitive Surgical. 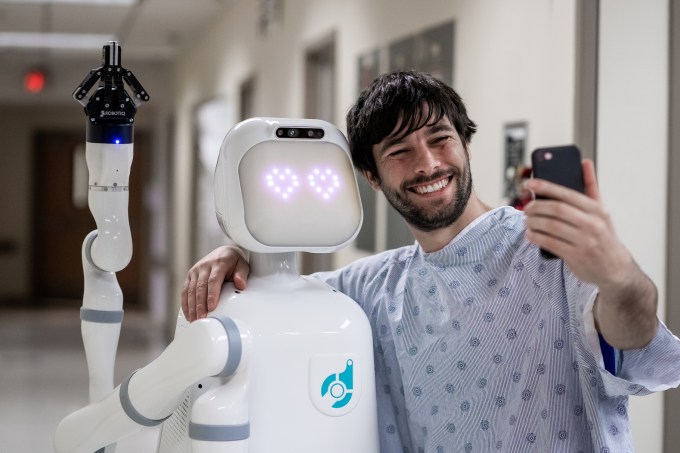 Diligent Robotics hopes to differentiate itself by building social intelligence into Moxi so it feels more like an intern than a gadget. “Time and again, we hear from our hospital partners that Moxi not only returns time back to their day but also brings a smile to their face,” says Thomaz. The company wants to evolve Moxi for other dull, dirty or dangerous service jobs.

Eventually, Diligent Robotics hopes to bring Moxi into people’s homes. “While we don’t see robots replacing the companionship and the human connection, we do dream of a time that robots could make nursing homes more pleasant by offsetting the often staggering numbers of caretakers to bed ratios (as bad as 30:1),” Thomaz concludes. That way, Moxi could “help people age with dignity and hold onto their independence for as long as possible.”