Reddit, the popular discussion site visited by more than 430 million people per month, is opening up some of its most valuable screen real estate to advertisers with the launch of its first trending ad product, the Trending Takeover. The new ad unit will allow brands to reach visitors on two of the most heavily visited areas of Reddit’s website: the Search tab and the Popular feed.

The ad format allows the brands’ campaigns to run across the largest trends on Reddit’s site for 24 hours, Reddit says. The trends section is where users can see what’s currently buzzing and being discussed across the site, similar to the Trends section on Twitter, which can also be targeted by advertisers. 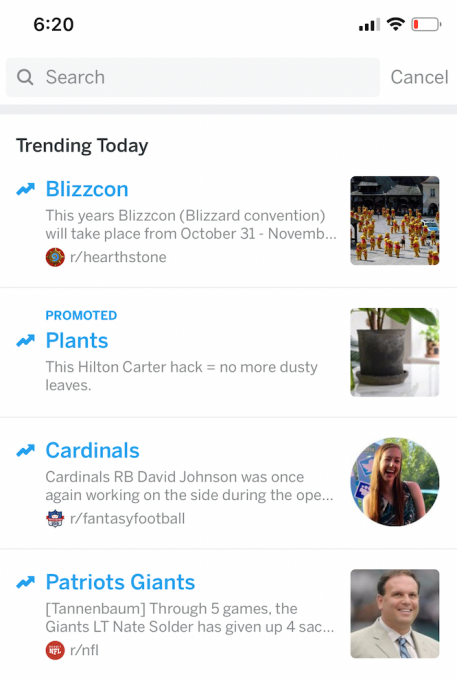 Reddit already offers advertisers the ability to run campaigns across its site in order to raise brand awareness, drive conversions or generate website traffic, app installs or video views, among other things. But the new Trending Takeover ad product will allow brands to reach even more potential eyeballs, as Reddit says the Popular feed alone is used by a third of the site’s visitors daily, and the Search tab also reaches millions every day.

In addition to the increased visibility, the benefit to this sort of ad format is that a campaign can be designed to align with what’s being talked about in real time during the day it runs. For instance, a brand could run a trending ad on the day their brand became a part of the trending section organically.

According to eMarketer, Reddit was forecast to generate $119 million in net U.S. ad revenues in 2019, giving it a 0.1% of the overall U.S. digital ad market. But the analyst firm believes that figure will more than double, to $261.7 million, by 2021, noting how the company continued to roll out new formats like its autoplay in-stream video, cost-per-click, Top Post Takeover slots and more.

“With millions of searches taking place every day and over one-third of users coming to Reddit’s Popular feed daily, brands can now be part of where cultural trends are born online — Reddit,” said Shariq Rizvi, vice president of Ads Product and Engineering at Reddit, in a statement. “For Reddit, a large focus for 2020 is about maximizing new and premium opportunities for brands to authentically engage with Reddit users,” Rizvi added.

In beta tests of Trending Takeover, Reddit worked with more than 15 partners across entertainment, consumer tech, CPG, automotive and QSR verticals, it says, including Spotify, Method and Adobe. The company claims these early testers saw both an increase in conversions and click-throughout rates that were two times more than industry standards for social.

For example, Method used a combination of hand-picked keywords and its own custom creative on the Trending Takeover landing page and saw click-throughs at over two times industry standards. It also was able to use the format to drive video views with a completion rate of four times that of Reddit’s usual Promoted Posts format. The brand had specifically targeted communities like r/houseplants, r/gardening and r/malelivingspace for a campaign about its household cleaners. According to a media buyer cited by AdWeek, Promoted Trends on Twitter can cost around $250,000 per day, although pricing is customized. Reddit’s new Trending Takeover ad would probably be a minimum of around $100,000, they estimated. Reddit was not confirming pricing.

Reddit says it’s now selling Trending Takeovers on a reservation, not programmatic, basis. The ads run on both desktop and mobile.