What’s a Corvette? To me, the formula is simple: Loads of power in an affordable package that can hold two golf bags. For the past 62 years, that meant putting the engine in the front and a stick shift on the floor. And now it’s all different, and it’s the start of something great.

For the first time, the Corvette’s engine is in the middle of the car, resulting in a radical departure in tradition. Because of this placement, the Corvette drives differently. Better, most would say, while others still lament the change. I’m of the former group. The new Corvette is a lovely example of engineering, a vehicle capable of intense thrills and torque-induced smiles.

Let’s get this out of the way: The 2020 Corvette is good, and it’s only going to get better. Right now, the Corvette is a great vehicle that will likely please many buyers. But some will probably want more power, better brakes and a bit more excitement, and those will come with time. 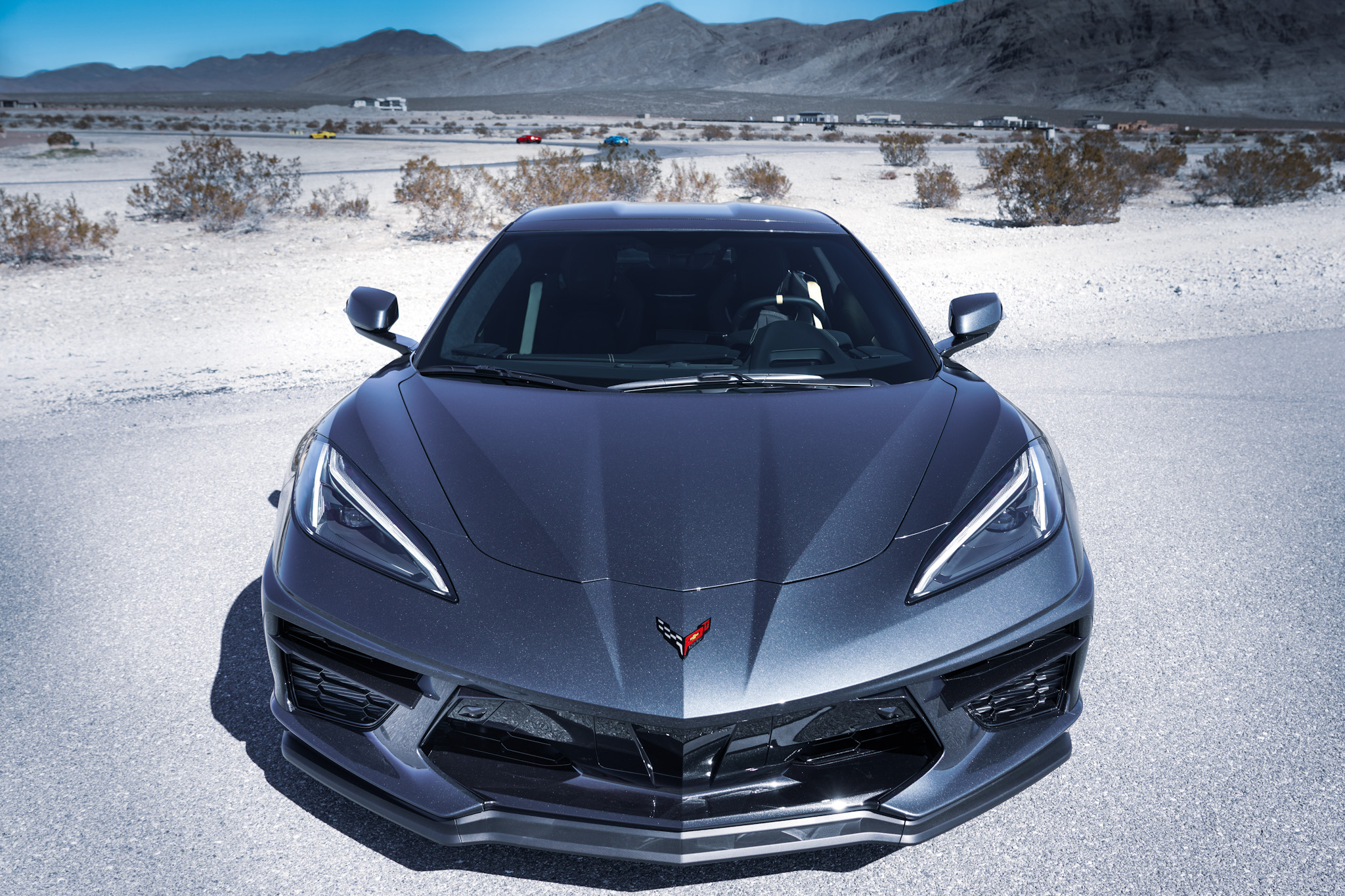 The 2020 Corvette is the beginning of a new era for Chevrolet. This model marks the most significant change for its longest-running nameplate. Since 1953 the Corvette has been America’s sports car, able to stand tall against Europe’s finest for a fraction of the cost, and it still does in this new package. The new, mid-engine Corvette even starts at $60,000.

I spent a few days with the new Corvette in and around Las Vegas, where I drove it on the busy highway, empty desert roads and down the Vegas Strip. I also spent a few hours with it on a track, where it displayed a different side of its personality.

I found the Corvette to have plenty of power and a competent chassis well-suited for lively driving and comfortable cruising. There’s room for two golf bags in the back and a couple of cases of beer in the front. It’s comfortable and easy. The new V8 Chevy small-block has the goods to smoke tires and bring smiles to faces.

But I also found it disappointing.

The 2020 Corvette is not great. The brakes are touchy and inconsistent. The head-snapping power is buried, requiring drivers to dig deep into the tachometer to find excitement. Countless menus and options are controlling various safety settings; these settings can be overwhelming. And for some reason, all the climate control buttons live in a long bar spanning an odd divider between the driver and passenger.

The new ‘Vette handles well. Chevy knows how to tune a chassis, and it’s lovely here. The sports car dives into corners with all the confidence in the world. It exits corners without drama or tire spin.

On the track, where on-road annoyances become deal-breakers, the Corvette is easy. I’m not sure that’s a good thing.

Corvettes have always been controlled chaos, with heavy engines sitting over the front axle. They weren’t, say, mad like a Dodge Viper or Lamborghini of old, but still had crazy enough power that demanded respect. That’s not the case anymore. Even while throwing this car into corners, and laying everything out on the straights, the 2020 Corvette with the Z51 package was controlled and methodical. For some, I guess, this is a good thing, but I missed the scary excitement of past generations.

With the engine behind the driver and in front of the rear axle, the mid-engine Corvette handles more like a supercar than a muscle car. It can make nearly any driver competitive on a track. Point the Corvette, and it goes. Combined with the advanced traction control, the 2020 Corvette instills confidence and, from that, a bit of excitement. It’s easy to jump in and attack rolling hills and winding corners. Technical turns are easy and, if you want, some of the nannies can be turned off and the car is happy to slide on its back tires.

There’s enough power to make a person smile but not enough to make someone giggle. In this base package, the Corvette is more of a speedy grand tourer than a racer.

If only it had better brakes.

The new Corvette has a new braking system. It’s a brake by wire affair where there isn’t a traditional master cylinder controlling a hydraulic braking system. In this car, a computer controls the system, and I’m not a fan of the implementation. On the street, it’s annoying and touchy. On the track, it leaves a lot to be desired.

To be clear for the track nerds, there is little brake fade. The brakes are seemingly stable lap after lap. Can They survive hours of racing? I’m not sure, but I’m happy to test it out if GM can resupply the vehicle.

The brakes are one of the worst parts of this vehicle. Chevy enlisted the help of Brembo, which sounds great on paper. Brembo is the premier manufacture of braking systems. In this case, without pointing fingers at Brembo or Chevy, something went wrong. These brakes need changing.

The small-block Chevy is the beating heart of the Corvette and has been since legendary Corvette engineer Zora Arkus-Duntov stuffed one into a ’55. A Corvette without a V8 would be like a baseball game without a hot dog and overpriced beer. It’s un-American.

The LT2 is a compact small-block that produces 490 hp and 465 lb-ft. of torque It has all the techno-wizardry that one would expect from a modern engine, including the capability to flawlessly shut off half the cylinders and operate on just four. This switch is unnoticeable, and the result is the real-world gas mileage of nearly 30 mpg on the highway.

This sophisticated small-block is part of the reason the Corvette can get up to 60 mph in around three seconds — that and the computer-assisted launch, transaxle and proper weight distribution.

Oh, and then there’s the interior. The inside of the 2020 Corvette is, without question, the best interior Chevy has ever done. It’s beautiful and as good as anything available from Audi, McLaren, BMW or Acura.

So, for around the price of a seven-seat SUV, a person could ditch the kids and get a two-seat, mid-engine Corvette able to carry golf clubs and hit 60 mph in around three seconds. And it can be equipped with snow tires, too.

This is the beginning of a new era in motoring, for better or worse.

The Corvette is an American icon, and that’s the problem. With every model change, the expectations are always unrealistic. It’s never going to be good enough for some people. Every model change has always been overanalyzed and dismissed. Chevrolet is up against six decades of tradition, lore and rumors. For instance, this model doesn’t have circle taillights, and that’s a high crime to some Corvette diehards.

With the 2020 Corvette, General Motors’ Chevrolet division threw everything out and started anew. The result is a mid-engine sports car comfortable on the road and the track for the price of a heavy-duty pickup.

The ‘Vette has always been a product of its time, and this one is no different. As the world clambers to dynamic electric vehicles, Chevy had no choice but to push the Corvette into the future. But it wasn’t Tesla that made Chevy put the engine behind the driver. It was physics.

I have quibbles with some of the equipment choices and their results on the driving dynamics. The brakes are bad. There is too much glare from the interior options. Explosive power is buried deep, nearly unreachable in most driving situations. All of these things will improve over time. Some buyers might be happy with the current kit, but to expect it to be perfect out of the gate is unreasonable.

The comparisons are inevitable. It’s a Ferrari for a fraction of the cost. It’s the same price as a front-engine Mustang Shelby GT350R, but handles better. Why get a four-banger in the mid-engine Porsche Cayman when the ‘Vette offers a small-block V8 for the same price. The 2020 Corvette isn’t better, per se than those. It’s different.

The Corvette sits atop America’s motoring world because it’s an obtainable supercar for everyone. With the 2020 Corvette, Chevy is offering mid-engine dynamics for a fraction of the cost.

Sure, it’s not as good as Ferrari or McLaren, but it’s pretty damn close. Give Chevy a few more years, and this mid-engine Corvette platform will likely morph into something even more competitive.

I was talking to some of the engineers who built this Corvette. The older, but faster 2019 ZR1 Corvette has a massive supercharge resting on top of its engine, and, according to these engineers, that supercharger can be fitted onto the new engine. More power is on the way. 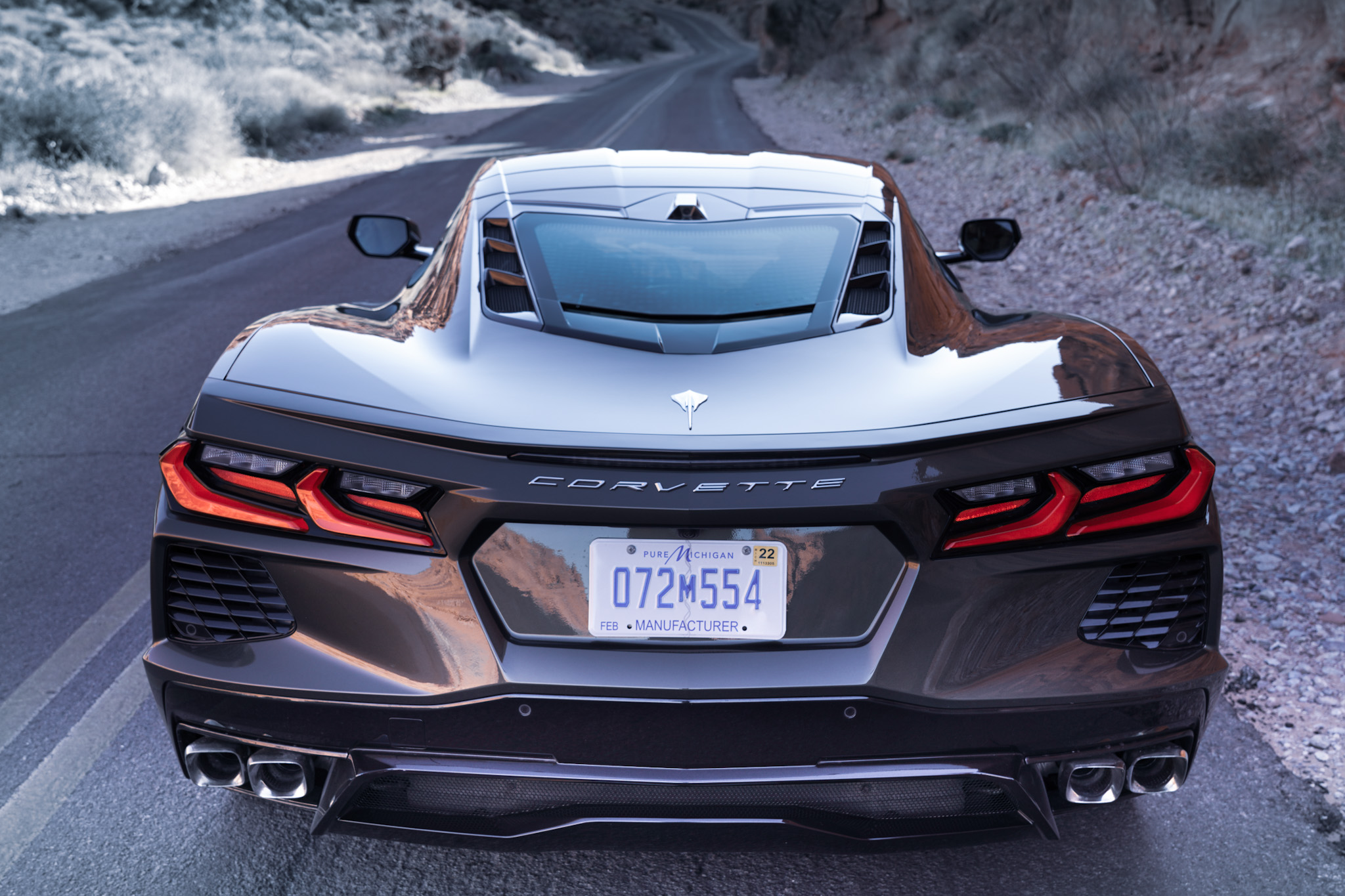