With Google and Facebook yielding massive control over the online ad market, leaving only scraps for other ad platforms, perhaps it was only natural that tech startups would take a step back and start to look for opportunities in selling billboards.

AdQuick, a marketplace for out of home (OOH) advertising, tells TechCrunch that it has closed a $6 million Series A led by Initialized Capital with participation from WndrCo, Shrug Capital, Work Life Ventures, The Todd & Rahul Angel Fund and rapper Nas. The startup has now raised $9.4 million to date.

AdQuick isn’t in the business of renting out advertising space they own. Like traditional channels, they connect the ad space owner with a buyer and take a commission on the purchase. Unlike some other channels, they’ve tried to inject the ad analytics of the web into the process so that buyers understand what they’re paying for impressions and can point brands to higher ROI locations where they might not have been looking.

“You know while the digital market is just so overbid and essentially controlled by Facebook and Google, the returns on investment from out of home ads keeps going up because people out in public have to see and experience them,” Initialized’s Alexis Ohanian, who led the deal, tells TechCrunch.

In recent months, startups like ZeroDown and Brex have coated San Francisco in outdoor advertising campaigns, while the explosion of direct-to-consumer brands has led startups with massive online ad spends to begin looking at the prices of a billboard on the 101. It’s not just ad real estate in SF or New York or LA that’s seeing increased demand; CEO Matt O’Connor tells TechCrunch that the OOH ad market is seeing big growth across the board.

“It’s the only non-online channel growing, and it’s actually growing faster in the last year than it has in the past decade,” O’Connor says. “A big tailwind is that brands are looking to spend offline earlier than they ever have in their history because it’s gotten so expensive that they’re forced to look for channels with better payback.”

The key opportunity AdQuick is tapping into is the 30-35% of OOH ad space they estimate went unused in the Unites States last year. 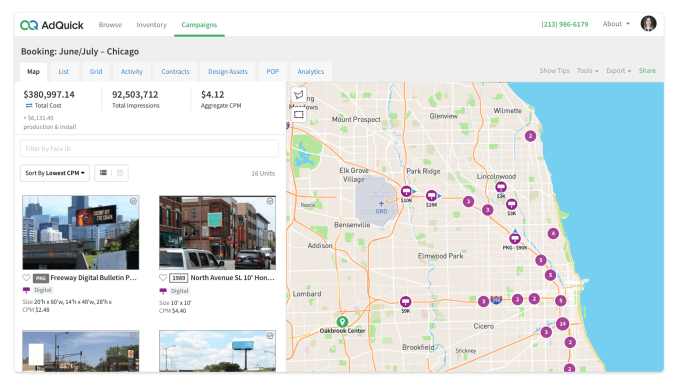 Taking on digital ad space sold by Google and Facebook means leveling the playing field, and part of determining that real-world ad’s ROI can mean relying on the same creepy ad analytics services that connect web habits and location data of de-identified devices for serving online ads — but such are the ills of the advertising world in 2020. These processes allow ad buyers to gain a better idea of what their investment in bench advertising in Cheyenne, Wyo. is actually going to mean in terms of impressions and how much they are paying per pair of eyeballs.

One thing AdQuick isn’t interested in is trying to find an entry point to the the non-OOH digital ad market. “That’s pretty bloody water that’s been picked over by both the duopoly and the thousands of other quote-unquote adtech companies,” O’Connor says.