Swiftmile, the startup that wants to become the gas station for micromobility vehicles, is getting into advertising. Swiftmile already supplies cities and private operators with docks equipped to park and charge both scooters and e-bikes. Now, the company is starting to integrate digital displays that attach to its charging stations to provide public transit info, traffic alerts and, of course, ads.

When a rider pulls up to the station and parks a vehicle, the 55-inch screen will display nearby transit schedules, in partnership with Transit Screen, to encourage more people to rely on public transit.

“TransitScreen is excited to partner with Swiftmile to support the increased access to real-time information about mobility choices,” TransitScreen VP of Enterprise Solutions Tony Hudgins said in a statement to TechCrunch. “Mobility hubs like theirs are changing what commuting looks like in the future, and we look forward to being a part of increased first- and last-mile solutions.”

Swiftmile plans to start deploying these screen-equipped stations in March. By the end of the year, Swiftmile anticipates deploying 1,000 of these stations with digital screens. That would come out to about $80 million a year in ad revenue. Already, Verizon Media Group (owner of TechCrunch) is a customer of Swiftmile. 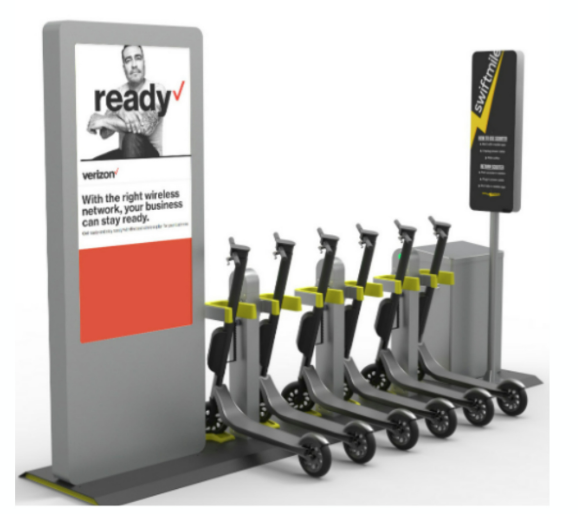 Swiftmile has already deployed 140 of its charging stations in cities like Austin and Berlin, and plans to hit 1,000 by the end of the year. Down the road, Swiftmile envisions partnering with auto manufacturers to enable car owners to charge their vehicles alongside scooters.

Swiftmile, which is also backed financially by Verizon, has raised about $6 million in funding. It’s gearing up to officially announce its Series A in the coming weeks.