Big changes are ahead for BlackBerry and TCL as the smartphone market continues to see slowing growth. The pair announced today that they would end their four-year brand licensing and tech support partnership in August 2020, with TCL ceasing to make new models of BlackBerry handsets after then. TCL — which has only a 1% share of the whole smartphone market today — will continue to support models that are already in the market until August 31, 2022.

“We… regret to share… that as of August 31, 2020, TCL Communication will no longer be selling BlackBerry-branded mobile devices,” says the note, posted on BlackBerry’s Twitter account. “TCL has no further rights to design, manufacturers or sell any new BlackBerry mobile devices.”

The company has yet to follow up with any more details about what this means for new BlackBerry handsets after that point. (We have asked directly but have not heard back. People asking on Twitter are also not getting any responses.) 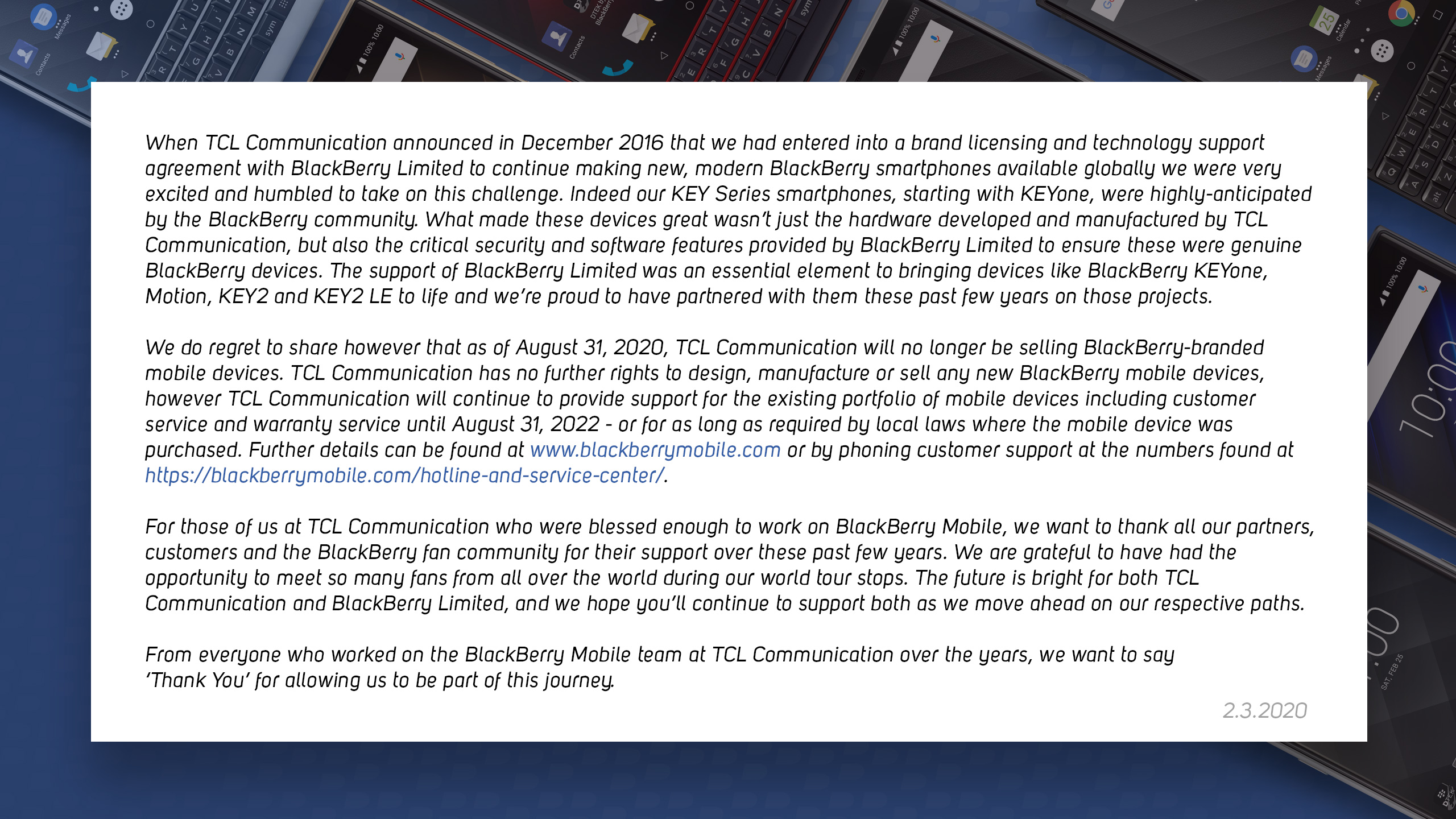 The announcement caps off what has been a tough four years for the two companies.

BlackBerry, making devices using its own operating system, was once a market leader and trailblazer in the world of smartphones with its small, full-qwerty keyboard gaining a loyal following among professional users, “prosumers” and other early adopters. That popularity lead to the Canada-founded company controlling some 50 percent of the smartphone market in the US and some 20 percent globally at its peak.

That was, however, before the rise of the touchscreen. After the launch of Apple’s iPhone and a slew of Android-powered handsets, Research In Motion (as the company was called then) gradually saw its market share start to decline as it failed to produce compelling enough handsets to fit changing tastes.

RIM/BlackBerry appeared to be ready to leave the smartphone market altogether to focus instead on security, enterprise services and systems for other kinds of “hardware” like connected cars until TCL came along.

TCL’s announcement in December of 2016 that it would take over making handsets, with BlackBerry to provide security and apps, but not the operating system, which would be Android — not unlike the partnership that another once-huge but now ageing handset brand, Nokia, struck up with HMD, just months before that, to make smartphones built on Android — looked like a new lease of life for BlackBerry.

But the change may have been too little, too late. The last few years have seen a general slowing down of smartphone growth, in large part due to market penetration in many countries. It’s much harder to shift devices than it used to be. There is also an army of new handset makers out of Asia, also building on Android, that are dominating sales. Huawei, including the likes Xiaomi and Oppo, make the sales funnel even more challenging.

The end result has been that TCL and BlackBerry have struggled to break through with significant sales — falling instead into the large, and largely fragmented, “other” category in smartphone market share reports.

StrategyAnalytics tells me that TCL has only a 1% share of the global smartphone market covering both its BlackBerry and Alcatel brands (the latter is another legacy mobile handset brand that TCL resuscitated).

More recently, TCL has been wading into the market with its own-branded devices alongside its efforts with BlackBerry and Alcate), and so the writing was, perhaps, already on the touchscreen, so to speak.

We’ve reached out to BlackBerry to find out if it can tell us any more on its plans for handsets going forward or if this is really it. BlackBerry has inked some licensing partnerships in specific markets, such as this handset deal in Indonesia, so there may be yet more to come.