Amazon’s Fire TV Edition, the version of Fire TV that now powers more than 50 Fire TV Edition smart TVs and soundbars as a competitor to Roku TV, is expanding to more devices besides just the television. Today, Amazon announced a new Fire TV Edition that’s capable of powering soundbars and being integrated into autos, plus versions designed for operators and certified solution providers.

The company’s ambitions for Fire TV to become a more expansive platform were already known. Amazon this past fall introduced a new Fire TV soundbar and more than a dozen new Fire TV Edition products in order to better compete with Roku, which at the time had gained a lead over Amazon in U.S. connected TV market share.

Fire TV’s steady expansion on the international front now continues. In 2019, more than 50 Fire TV Edition smart TVs and soundbars have been launched from brands including Grundig, JVC, Onida and Anker, and from retailers like Best Buy, Dixons and, soon, MediaMarketSaturn. And Best Buy alone has sold “millions” of Insignia and Toshiba Fire TV Edition smart TVs, Amazon claims. 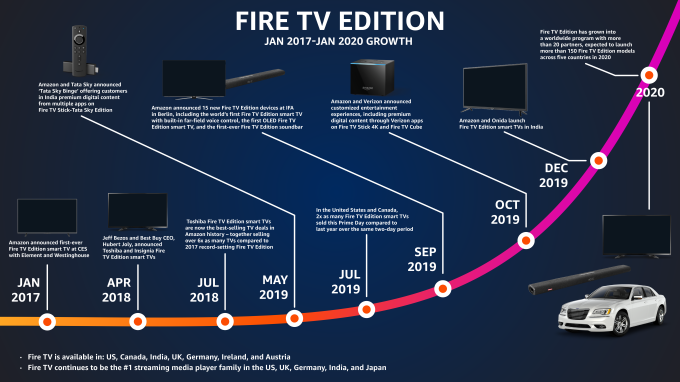 On the auto front, Amazon is partnering with BMW and Fiat Chrysler Automobiles (FCA) to offer hands-free Alexa, touch-screen interfaces and offline playback capabilities for the screens inside your car — meaning you can stream Prime Video, Amazon FreeTime or even Netflix on the go using the vehicle’s Wi-Fi or LTE connection, a mobile hotspot or any other internet-connected device.

“Adding Fire TV to future BMW vehicles represents a big step in bringing the best of streamed entertainment to our products. With Amazon’s approach, and with the help of Garmin, we are able to innovate and create a unique and special experience for BMW cars, providing the consistency of content and customer experience that Fire TV provides in the home. We look forward to working closely with Amazon to bring Fire TV to future vehicles,” noted Fathi El-Dwaik, vice president, User Interaction, Business Line My Car and Business Line My Life, BMW Group, in a statement about the integrations.

For operators, television and telco operators will be able to offer Fire TV Edition-powered devices to customers. This follows Amazon’s earlier partnerships with Tata Sky in India and Verizon (TechCrunch’s parent) in the U.S. With the launch of Fire TV Edition for operators, available now in North America, Europe, India and Japan, companies can choose from a range of solutions to better address their own customer and business needs.

On the operator front, Amazon also announced it’s working with the National Cable Television Cooperative (NCTC) to give its more than 750 members the ability to deliver low-cost Fire TV streaming media players directly to their combined 16 million broadband and 8 million video customers.

Finally, Amazon is now customizing Fire TV Edition for ODMs (original device manufacturers — the companies building the hardware that will eventually be rebranded for other companies when sold). 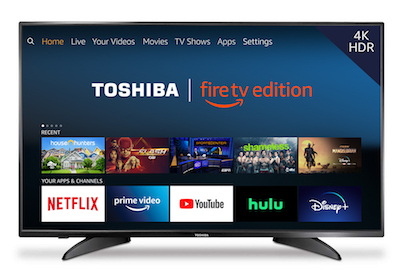 Amazon announced it’s working with Skyworth as an ODM with turnkey solutions for 4K and FHD smart TVs. Starting in India, brands will be able to select from a range of industrial design and price points to bring their smart TVs to market. Meanwhile, for auto partners, Amazon is working with system integrators VOXX Automotive and Garmin.

The cumulative impact of all these expansions will be to give Fire TV a competitive advantage against rival Roku when it comes to establishing worldwide market share for its TV platform. But it additionally serves as a means of bringing Amazon’s voice assistant Alexa to a wider user base and in places where Alexa isn’t always available — like the car or your cable TV box, for instance.

Related to this, Amazon also today announced more aftermarket devices with Alexa built-in for the car, and that Echo Auto will launch internationally this year.

“At CES 2017, we announced the first Fire TV Edition smart TV. Now, just three years later, Fire TV Edition has grown into a worldwide program which will include more than 150 Fire TV Edition models across more than ten countries by the end of the year,” said Marc Whitten, vice president, Amazon Fire TV, in a statement. “Our expanded Fire TV Edition provides companies with the services and tools they need to bring Fire TV to more categories and more screens,” he said.