Do you feel you have been receiving more spam calls of late? You are probably not wrong — or alone.

The volume of spam calls has grown by 18% globally this year, according to Truecaller. In its annual report published Tuesday, the Stockholm-based firm said users worldwide received 26 billion spam calls between January and October this year — up from 17.7 billion during the same period last year.

The United States remains the eighth-most-spammed country, where the volume of robocalls increased by 35% this year. In a separate report earlier this year, Truecaller estimated that 43 million Americans were scammed last year and lost about $10.5 billion. The growth is despite the efforts local carriers and authorities have made in the country.

Brazil again topped the list for the most-spammed country. The culprit behind the increasingly growing spam calls in the country are its own telecom operators and internet service providers. Truecaller said that in the last 12 months, calls from the operators have increased from 32% to 48%.

“These calls are typically seeking to provide special offers and upselling data plans amongst other services. Scam calls continue to be a big problem in Brazil. Two years ago, only 1% of all the top spammers were scam related, last year it went up to 20% – and this year it is up to 26%,” it said. 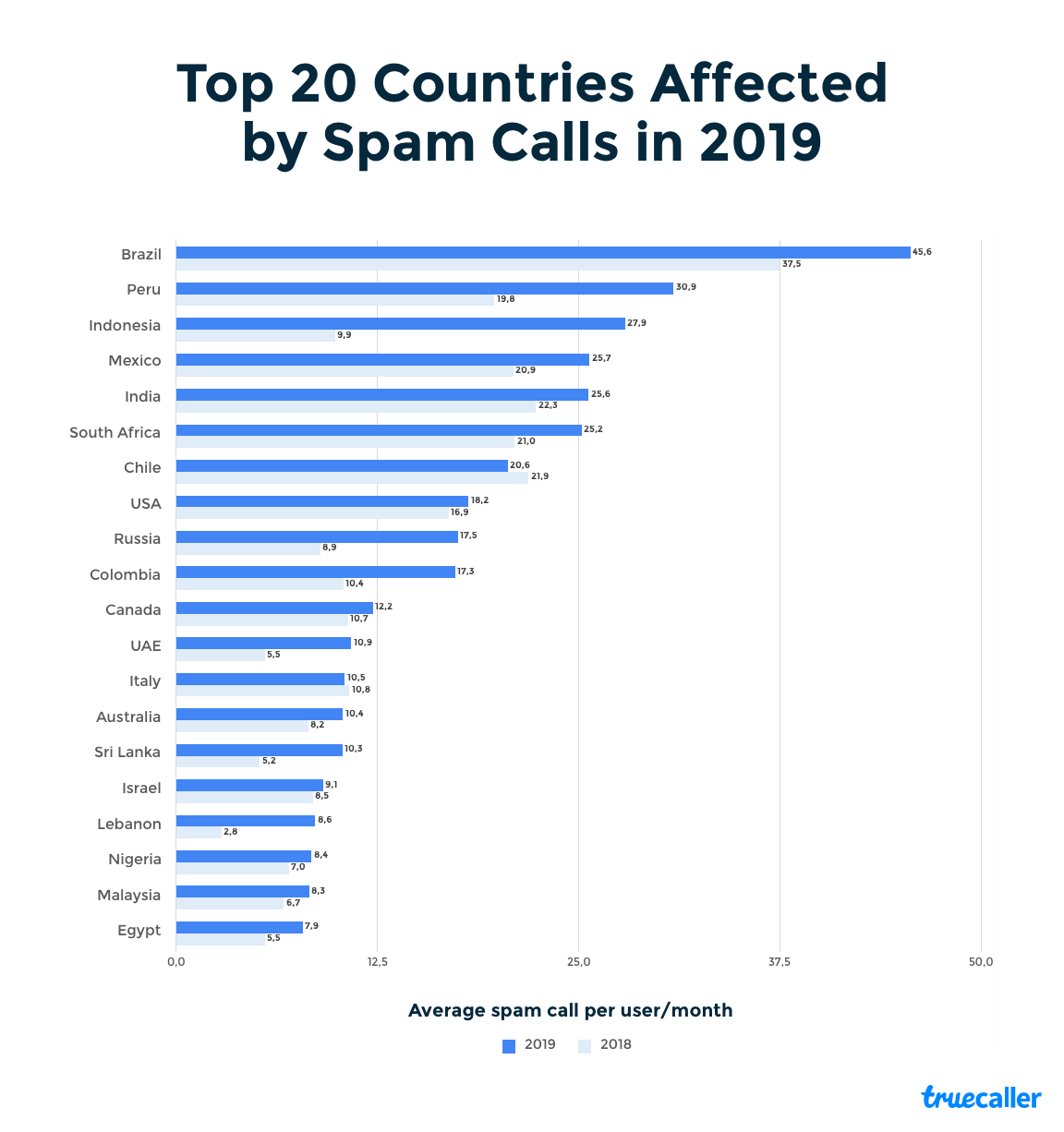 One of the takeaways from the report is just how complex it is to understand the nature of these spam calls. There is no common thread — or culprit — behind these calls. In some markets, such as South Africa (ranked sixth in the report), spammers are mostly making fraudulent tech support calls and conducting job offer scams.

In some other markets, like Chile (placed seventh in the report), it’s debt collectors that are placing 72% of all spam calls in the nation. In UAE, ranked 12th in the report, like Brazil, telecom operators were the ones making most of these pesky calls.

Peru, ranked second, and Indonesia, ranked third, have seen spam calls explode in the nation. In Peru, users received more than 30 spam calls a month. Most of these calls were made by financial services that are looking to upsell credit cards and loans.

In Indonesia, spam call volume has doubled in one year. As the nation goes through tough times, scammers have tried to leverage it, the report said. “One of the more common scams are the ‘one ring scam or Wangiri scam.’ Another scam that has been going on lately is the fake hospital/injury call where someone would call and tell you that a family member or a friend is hospitalized and need immediate treatment, and you need to send them money in order for them to treat the patient.”

The position of India, where the number of mobile subscribers has ballooned from 1 million to more than a billion in two decades, is fifth on the table. It’s better than before, but spam calls are still growing in the nation. In India, too, it’s the telecom operator and telemarketers that are together making up for more than 80% of all spam calls.

Truecaller’s report also noted that users worldwide received more than 8.6 billion spam texts this year. Below is a chart that looks at the markets that are most affected with spam SMSs. 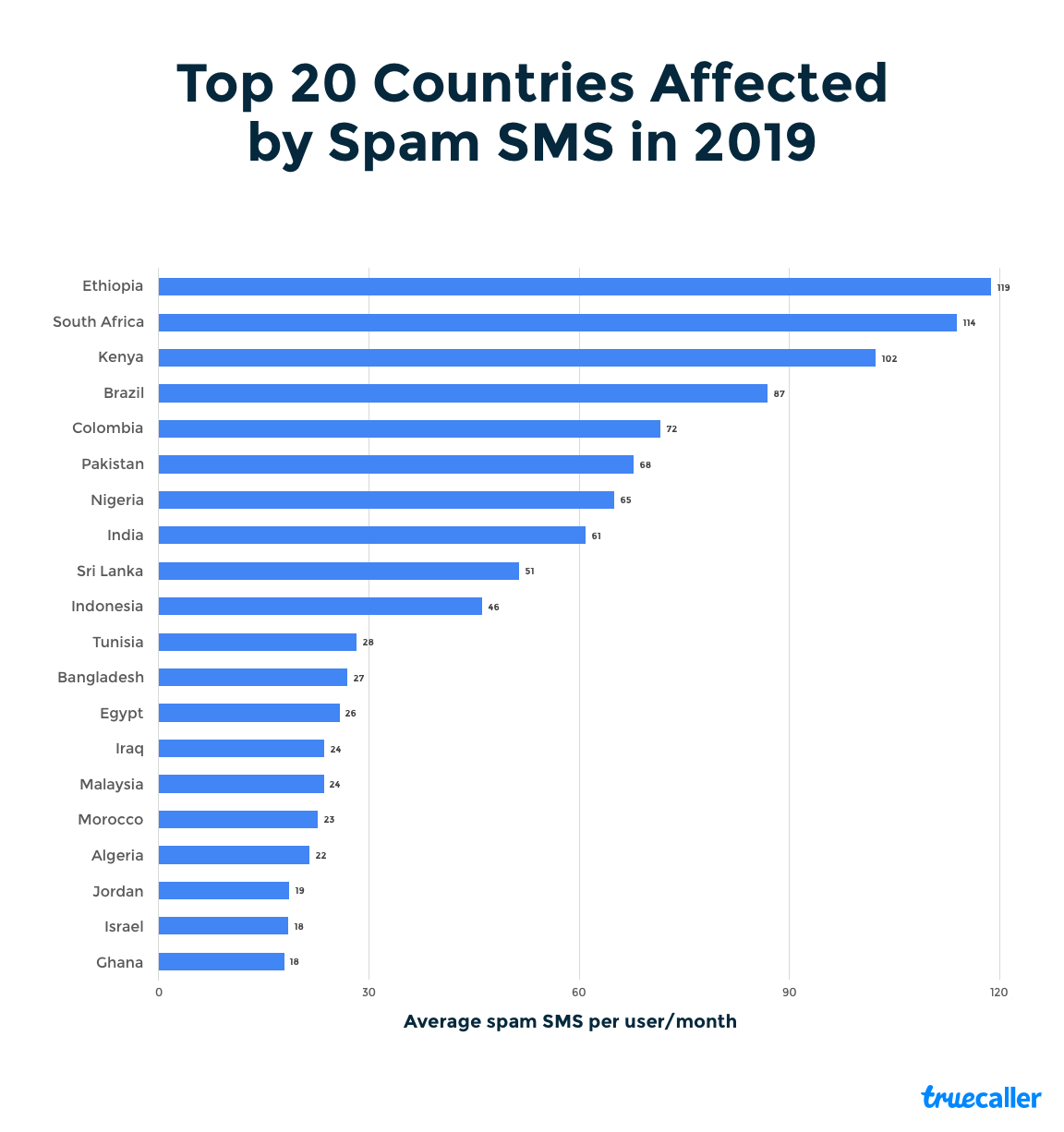 How to stop robocalls spamming your phone