It’s starting to look like the next property to get Niantic’s “real world game” treatment will be Catan — the namesake island from the popular Settlers Of Catan board game series.

Late last month, the company behind Catan said during a board games conference in Germany that it was working on a “upcoming massively multiplayer location based game” (albeit with no mention of Niantic). Called Catan: World Explorers, they noted that it “transforms the entire Earth into one giant game of CATAN”.

A website for the game has since gone up, and folks over at the Ingress subreddit (the unofficial homebase for fans of Niantic’s very first title) managed to uncover a few curious breadcrumbs hiding in the source code. The official Terms of Service and Privacy Policy links both point to Niantic’s servers, for example, and the page pulls in some Javascript with “Niantic” in the filename. So if Niantic wasn’t involved here, someone made a bunch of super weird mistakes.

Sure enough, I’ve confirmed with folks at Niantic that the company is indeed involved. They won’t say much about it, but confirmed to me that the game is being built on Niantic’s Real World Platform.

Not sure what that means? After the launch of Pokémon GO, Niantic started focusing on taking the tools they’ve already built (their massive database of real world locations, the game engine, and the server architecture that makes the whole ‘real world game’ experience work) and opening them up for third parties to build upon. Whereas Pokémon GO was largely built within Niantic with some oversight from The Pokémon Company, Harry Potter: Wizards Unite shifted more of the workload over to their partners at WB Games. As I wrote in my profile of Niantic and its goal of becoming a platform company back in April:

There’s a ton of overlap when it comes to which of the two companies is building what aspect of the game, but from what I’m told it sounds like Niantic is mostly focusing on the stuff behind the curtain — everything on the platform side, like the map engine, the networking, and the AR tech — while WB Games’ main focus is the stuff you’ll see in game, like the story, the content, and the art and animation. 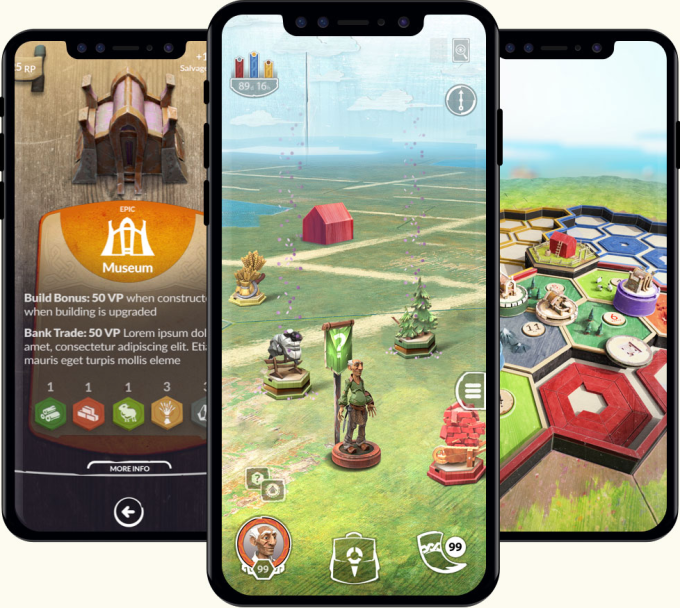 Meanwhile, we know a little about this Catan game from the aforementioned promo site:

Beyond that, I’m told that more details should trickle out sometime in early 2020.

One of the very first things Niantic did, back when it was a tiny team inside of Google that didn’t really know what it was going to build, was tear apart a massive collection of board games to find mechanics that might work as a mobile game. This led them to build a prototype called BattleSF… which led to Ingress… which led to Pokémon GO, and beyond. It’s sort of fun, then, that the company has ended up back in the realm of board games.