If you haven’t heard, TechCrunch has officially launched a weekly newsletter dedicated to all the ways people and goods move from Point A to Point B — today and in the future — whether it’s by bike, bus, scooter, car, train, truck, flying car, robotaxi or rocket. Heck, maybe even via hyperloop.

Earlier this year, we piloted a weekly transportation newsletter. Now, we’re back with a new name and a format that will be delivered into your inbox every Saturday morning. We’re calling it The Station, your hub of all things transportation. I’m your host, senior transportation reporter Kirsten Korosec.

Portions of the newsletter will be published as an article on the main site after it has been emailed to subscribers (that’s what you’re reading now). To get everything, you have to sign up. And it’s free. To subscribe, go to our newsletters page and click on The Station.

This isn’t a solo effort. Expect analysis and insight from senior reporter Megan Rose Dickey, who has been covering micromobility. TechCrunch reporter Jake Bright will occasionally provide insight into electric motorcycles, racing and the startup scene in Africa. And then of course, there are other TechCrunch staffers who will weigh in from their stations in the U.S., Europe and Asia.

We love the reader feedback. Keep it coming. Email me at kirsten.korosec@techcrunch.com to share thoughts, opinions or tips or send a direct message to @kirstenkorosec.

A new autonomous vehicle company on the scene

Deeproute.ai is the newest company to receive a permit from the California Department of Motor Vehicles to test autonomous vehicles on public roads.

Here is what we know so far. The Chinese startup just raised $50 million in a pre-Series A funding round led by Fozun RZ Capital, the Beijing-based venture capital arm of Chinese conglomerate Fosun International. The company has research centers in Shenzhen, Beijing and Silicon Valley and is aiming to build a full self-driving stack that can handle Level 4 automation, a designation by the SAE that means the vehicle can handle all aspects of driving in certain conditions without human intervention.

Deeproute.ai is also a supplier for China’s second-largest automaker Dongfeng Motor, according to TechNode. The startup plans to offer robotaxi services in partnership with Dongfeng Motor for the Military World Games in the city of Wuhan next month.

Remember way back in September when Tesla started rolling out its V10 software update? The software release was highly anticipated in large part because it included Smart Summon, an autonomous parking feature that allows owners to use their app to summon their vehicles from a parking space.

We have some insight into the rollout, courtesy of TezLab, a Brooklyn-based startup that developed a free app that’s like a Fitbit for a Tesla vehicle. Tesla owners who download the app can track their efficiency, total trip miles and use it to control certain functions of the vehicle, such as locking and unlocking the doors, and heating and air conditioning. TezLab, which has 20,000 active users and logs more than 1 million events a day, has become a massive repository of Tesla data.

TezLab shared the data set below that shows the ebb and flow of Tesla’s software updates. The X axis shows the date (of every other bar) and a timestamp of midnight. (Because this is a screenshot, you can’t toggle over it to see the time.) 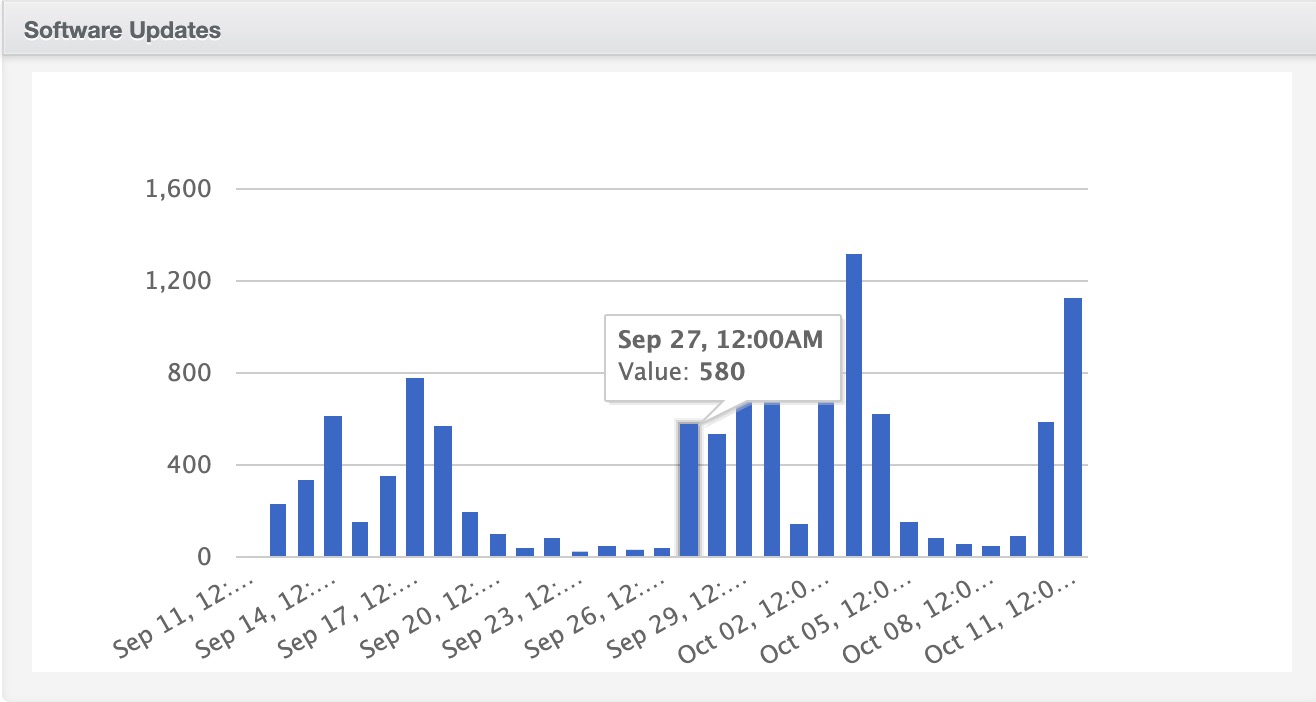 This data shows when Tesla started pushing out the V10 software as well as when it held it back. The upshot? Notice the pop on September 27. That’s when the public rollout began in earnest, then dipped, then spiked again on October 3 and then dropped for almost a week. That lull followed a slew of social media postings demonstrating and complaining about the Smart Summon feature, suggesting that Tesla slowed the software release.

Speaking of Smart Summon, you might have seen the Consumer Reports review of the feature. In short, the consumer advocacy group called it “glitchy” and wondered if it offered any benefits to customers. I spoke to CR and learned a bit more. CR notes that Tesla is clear in its manual about the limitations of this beta product. The organization’s criticism is that people don’t have insight into these limitations when they buy the “Full Self-Driving” feature, which costs thousands of dollars. (CEO Elon Musk just announced the price will go up another $1,000 on November 1.)

One encouraging sign is that CR determined that the Smart Summon feature was able (most of the time) to recognize when it was on a public road. Smart Summon is only supposed to be used in private areas. “This is the first we’ve seen Tesla geofence this technology and that is a bright spot,” CR told me.

Deal of the week

There were plenty of deals in the past week, but the one that stood out — for a variety of reasons — involved German urban air mobility startup Lilium. Editor Ingrid Lunden had the scoop that Lilium has been talking to investors to raise between $400 million and $500 million. The size of this yet-to-be-closed round and who might be investing is what got our attention.

TechCrunch is still hunting down details about who might be investing, as well as Lilium’s valuation. (You can always reach out with a tip.)

Lunden was able to ferret out a few important nuggets from sources, including that Tencent is apparently in this latest round and the startup has been pitching new investors since at least this spring. The round has yet to close. Lilium isn’t the only urban air mobility — aka flying cars — startup that been shaking the investor trees for money the past six months. Lilium’s challenge is attempting to raise a bigger round than others in an unproven market.

Sources: Lilium is looking to raise up to $500M for its electric flying taxis

We hear a lot. But we’re not selfish. Let’s share. For the unfamiliar, a little bird is where we pass along insider tips and what we’re hearing or finding from reliable, informed sources in the industry. This isn’t a place for unfounded gossip. Sometimes, like this week, we’re just helping to connect the dots to determine where a company is headed.

Aurora, an autonomous vehicle startup backed by Sequoia Capital and Amazon, published a blog post that lay outs its plans to integrate its self-driving stack into multiple vehicle platforms. Those plans now include long-haul trucks.

Self-driving trucks are so very hot right now. Aurora is banking on its recent acquisition of lidar company Blackmore to give it an edge. Aurora has integrated into a Class 8 truck its self-driving stack known as “Aurora Driver.” We hear that Aurora isn’t announcing any partnerships — at least not now — but it’s signaling a plan to push into this market.

Got a tip or overheard something in the world of transportation? Email me at kirsten.korosec@techcrunch.com to share thoughts, opinions or tips or send a direct message to @kirstenkorosec.

That hasn’t changed. Last week, Ike released a lengthy safety report and accompanying blog post. It’s beefy. But here are a few of the important takeaways. Ike is choosing not to test on public roads after a year of development, unlike most others in the space. Ike has a fleet of four Class 8 trucks outfitted with its self-driving stack as well as a Toyota Prius used for mapping and data collection. The trucks are driven manually, (a second engineer always in the passenger seat) on public roads. The automation system is then tested on a track.

There are strong incentives to demonstrate rapid progress with autonomous vehicle technology, and testing on public roads has been part of that playbook. And Ike’s founders are taking a different path; and we hear that the approach was embraced, not rejected, by investors. 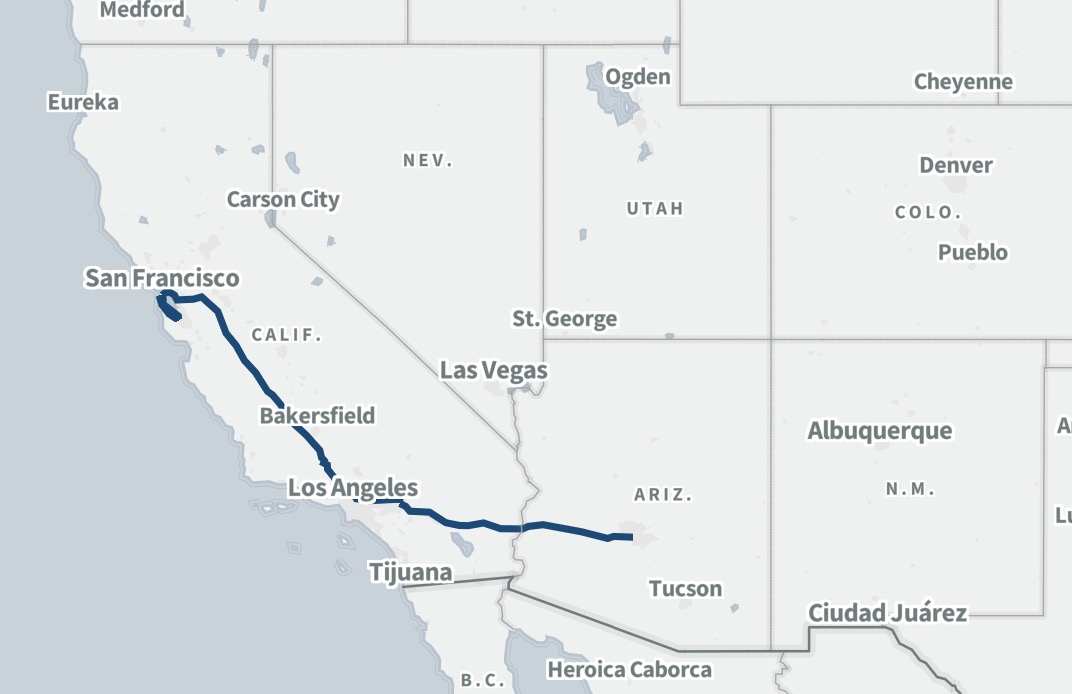 In the next issue of the newsletter, check out snippets from an interview with Randol Aikin, the head of systems engineering at Ike. We dig into the company’s approach, which is based on a methodology developed at MIT called Systems Theoretic Process Analysis (STPA) as the foundation for Ike’s product development.

In other AV truck-related news, Kodiak Robotics just hired Jamie Hoffacker as its head of hardware. Hoffacker came from Lyft’s Level 5 self-driving vehicle initiative and also worked on Google’s Street View vehicles. The company tells me that Hoffacker is key to its aim of building a product that can be manufactured, not just a prototype. Check out Hoffacker’s blog post to get his perspective.