At Google’s hardware event this morning, the company introduced a new voice recorder app for Android devices, which will tap into advances in real-time speech processing, speech recognition and AI to automatically transcribe recordings in real time as the person is speaking. The improvements will allow users to take better advantage of the phone’s voice recording functionality, as it will be able to turn the recordings into text even when there’s no internet connectivity.

This presents a new competitor to others in voice transcriptions that are leveraging similar AI advances, like Otter.ai, Reason8, Trint and others, for example.

As Google explained, all the recorder functionality happens directly on the device — meaning you can use the phone while in airplane mode and still have accurate recordings.

“This means you can transcribe meetings, lectures, interviews, or anything you want to save,” said Sabrina Ellis, VP of Product Management at Google. 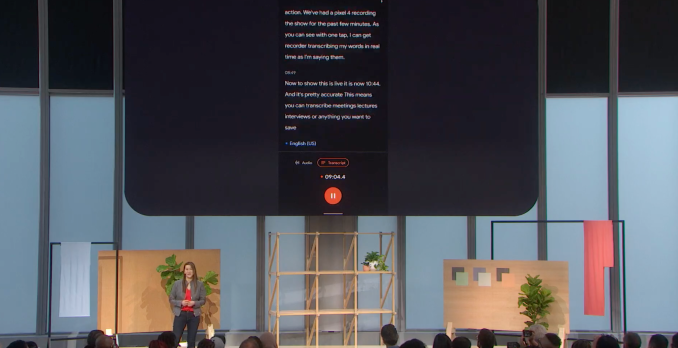 The Recorder app was demonstrated onstage during the event, live, and was offering — from what was shown — an error-free transcription. In real-world environments, voice transcription apps often fail because of background noise or bandwidth issues. It’s unclear how well the Recorder app will fare when it’s not hooked up directly to an audio source, as it likely was for this event, but rather placed on a tabletop or used in a noisier environment. 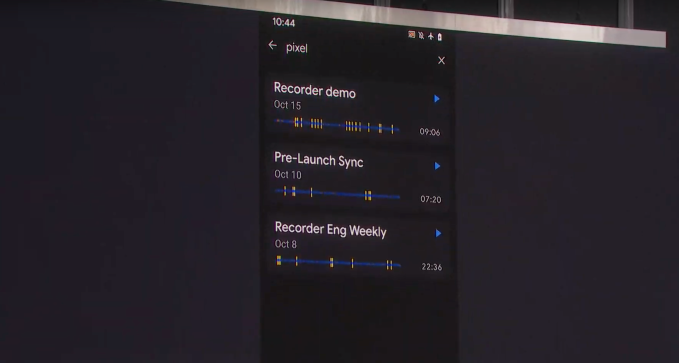 The app also offers an advanced search functionality where you’ll be able to search for sounds, words or phrases. In the search results, every instance the search term was spoken was highlighted in the playback bar so you can tap to go right to the part of the recording you need.

Currently, Recorder works in English but Google says more languages are coming in the future.

The voice recorder app is among many advances Google has made recently in terms of voice processing and real-time transcriptions. The company this spring introduced a new speech recognition system that works instantly and offline, which first launched in its keyboard app, Gboard, on Pixel devices.  And at Google I/O, it rolled out live transcription and captioning in Android, as accessibility improvements. It only makes sense that the voice recorder app itself would receive a similar upgrade.

The app was introduced among a series of improvements coming to Google’s new smartphone, the Pixel 4. Google didn’t offer a timeline for bringing it to other devices.

The new Recorder app uses speech recognition and AI to transcribe lectures, meetings, interviews and more—and makes them easy for you to find later. (English only right now, with more languages to come.) #madebygoogle pic.twitter.com/fdKRItuS4b