Zomato, one of India’s biggest food delivery startups, has major ambitions. Now it is also facing some major challenges.

Zomato is increasingly expanding its reach in the country to serve dozens of new cities and towns every month. It is investing heavily in building cloud kitchens to quickly meet customers’ demand for certain food items.

And it is internally working on “Project Kisan,” something which has not been previously reported, to procure raw material directly from farmers and fishermen to better control the supply of items to restaurants. It also wants to deliver food by drones.

To boost its revenue, the 11-year-old firm is trying to bring to users who prefer to eat at home Zomato Gold, a two-year-old subscription service as part of which customers dining in at a restaurant access a number of discounted deals on food and drinks, sources familiar with the matter have told TechCrunch in recent weeks.

Zomato Gold is already a hit. The company expects Gold, which has amassed more than 800,000 customers, to bring in $20 million to $25 million in revenue by end of this year.

But before Zomato goes about extending the program, Zomato Gold’s genesis has come under severe scrutiny from a number of restaurant partners in India who say that the startup’s offering is hurting their bottom line and brand image.

More than 2,000 of the 6,500 restaurant partners of Zomato Gold have opted out of the program in recent days. The disruption occurred over the weekend after the National Restaurant Association of India (NRAI), a trade body that represents more than 500,000 restaurants in the country, kickstarted a #LogOut campaign against Zomato and other dining startups such as Nearbuy, Dineout, EazyDiner and Magicpin. 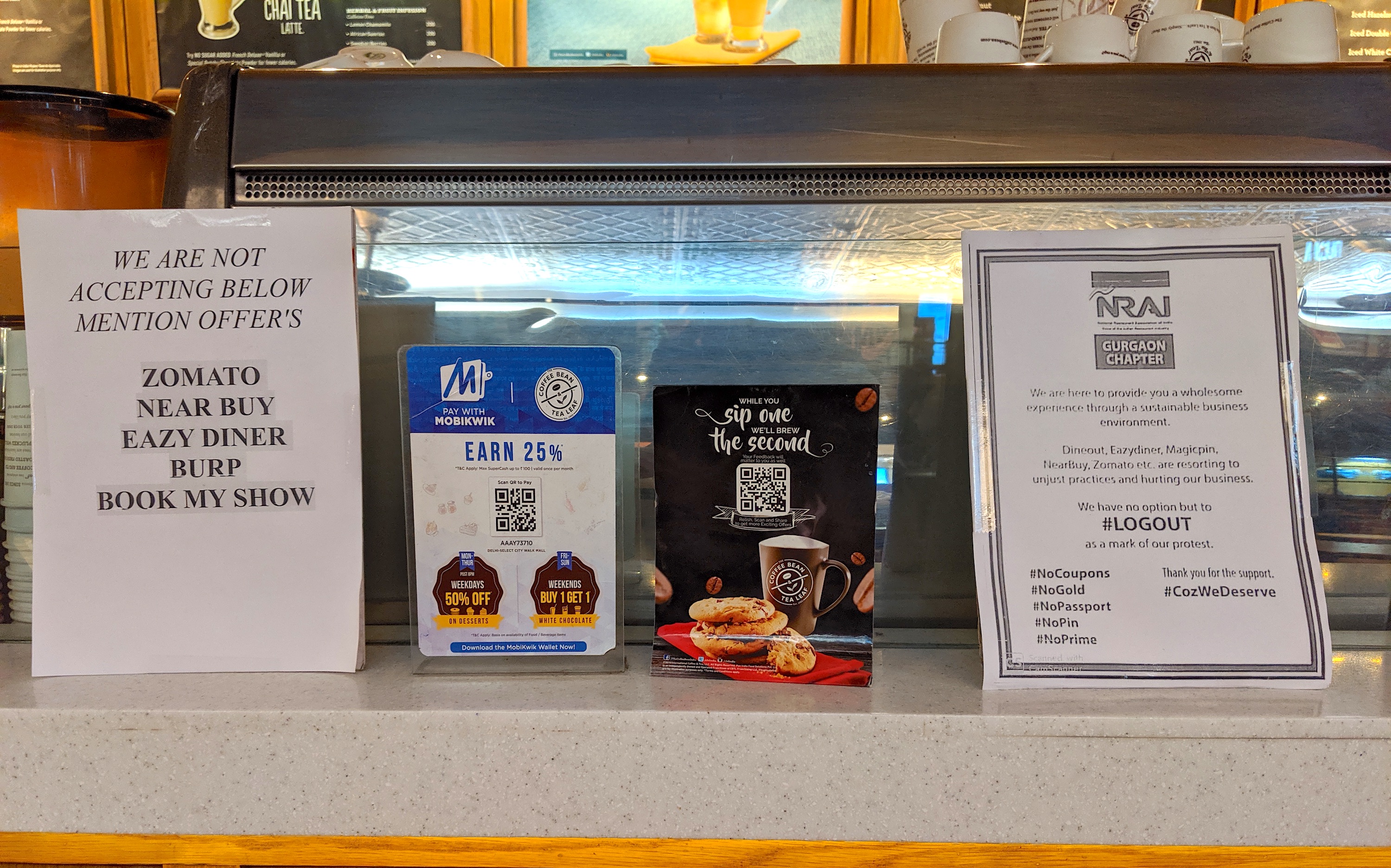 The Gold program was supposed to be a win-win for both Zomato and restaurant partners. Zomato presents users with restaurant menus, the option to book tables and get food delivered to their homes. Through Gold, restaurants were able to get better discovery and win some patrons, but more importantly, garner improved reviews because of the freebies. And for Zomato, which charges a fee for a Gold subscription, it was able to better monetize its customer base.

But somewhere along the line, Zomato opened to everyone what was supposed to be a program for a limited number of subscribers, making it unfeasible for restaurants to handle the additional footfall.

Deepinder Goyal, CEO of Zomato, last week acknowledged the resistance and admitted that the company had made some mistakes. “Somewhere, we have made mistakes and things haven’t gone as planned. This is a wake up call that we need to do 100x more for our restaurant partners than we have done before,” he tweeted.

To resolve the issue, Zomato, which operates in two dozen countries, and other food startups and restaurant partners met earlier this week. That also did not go as planned.

“Over the past two days, NRAI has held extensive meetings with all restaurant aggregators and we were bemused to learn that the aggregators were promoting deep discounts to stay competitive amongst each other. While one aggregator gave 1+1 (one drink or food item free on purchase of another drink or food item), the other had to adopt a 50% discount scheme in order to stay relevant,” Rahul Singh, president of the NRAI, said in a statement.

Singh noted that it is restaurant partners that have to bear the cost of deep discounts that food aggregators offer on their platforms. “Restaurants do not get any share of the proceeds that aggregators generate from guests as subscription fees,” he added.

Zomato, for its part, assured that it will bring changes to its Gold program by mid-September to introduce measures to prevent over usage by customers. But late Wednesday, NRAI rejected the proposal, calling it insufficient, and said restaurants will continue to stay off Zomato.

The restaurant association said the problem is deep discounts that Zomato is bandying out through its Gold program and the startup’s proposed changes don’t really address that.

“It’s a tweak in the drug, which doesn’t solve the addiction. Since the launch in November 2017, this program has been shifting goalposts. What started as an exclusive invite only privilege, became a marketplace for bargain hunters, a word admitted by the Zomato founder in recent tweets. This Gold has lost its sheen. We stand united in the cause to obviate the deep discounting phenomenon and will therefore #stayloggedout,” the NRAI said in a statement.

Things further escalated on Thursday afternoon after Goyal argued that NRAI’s Singh himself practices deep discounting on his own startup, The Beer Cafe.

Here’s what I think is going on – pic.twitter.com/bo4DQTe3Qb

Meanwhile, restaurants have also complained that if they do not accept Zomato’s Gold program, they risk disappointing customers who have come to expect that every eatery has enrolled in Zomato Gold. These customers then leave bad ratings on Zomato, which significantly affects the number of orders they get, they say. Zomato makes most of its revenue from promoting and selling listings on its platform.

A Zomato spokesperson told TechCrunch that the company was committed to making some changes to its program. Goyal added, “Zomato is logging out of the logout campaign. We have said enough and we are getting back to work. I am confident better business sense will prevail at the end.”